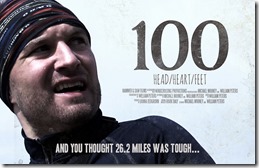 I received an email today from Ben Watts, who is the Associate Producer of a film called 100: HEAD/HEART/FEET that will chronicle one runner’s 3rd attempt to complete the Vermont 100 Endurance Race.

Ben asked if I could share the trailer to the film and spread the word about their Kickstarter campaign supporting the production. Given the local connection for me, as well as the fact that I’ll be pacing a friend through the last 30 miles or so of the race this summer (where they will be filming), I couldn’t help but share the trailer here.

Take a look, and if you like what you see, consider chipping in to support the production (I did)!