I can’t believe that 2016 has just gone by. It feels that only yesterday I moved in to a new home. 2016 started with positivity where I clocked 500 kilometres in January but it was not what I had imagined.

If you still remember, I set out 3 main goals and 1 secondary goal that I would like to achieve in 2016. But I only managed to complete the secondary goal. I neither managed to run a sub 3:30 marathon, nor run 4 marathons, nor run 3500 kilometres. In spite of the setbacks and disappointments, I ran more often than ever. I ran 2872 kilometres over 212 days. And I ran Tokyo Marathon, which was a memorable experience. 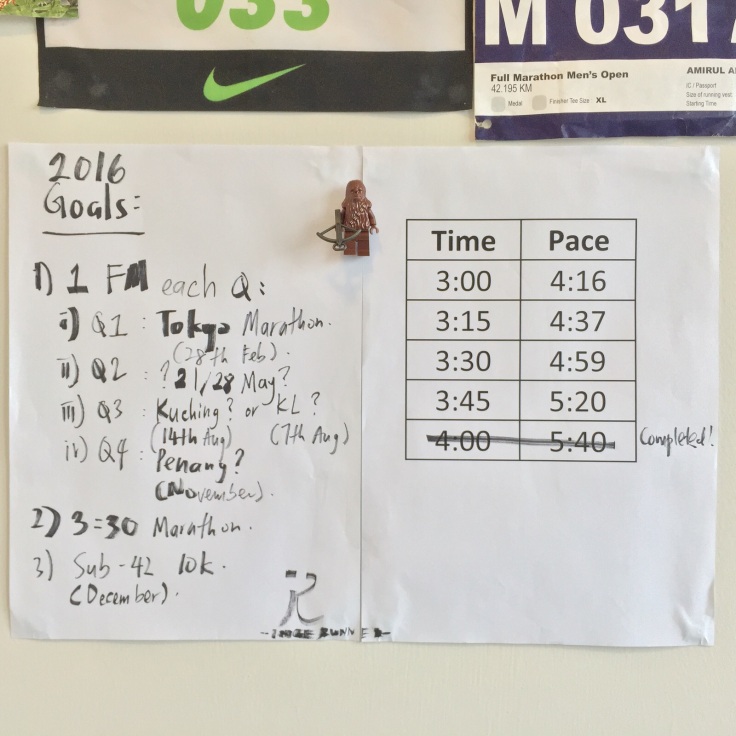 I was hopeful that I could pull this off. I believed that I could do it during my first marathon of the year in Tokyo. But I was mentally-defeated and finished in 3:37:54 which still remain a Personal Best. I had one more attempt at Kuala Lumpur Marathon and finished even worse.

Mental weakness is the main factor why I could not achieve this goal. This is an area where I really need to improve. Apart from that, it is due to lack of consistency in training. I may run a lot, but sometimes there are things that are out of my control. I got injured few times during the year and my training got interrupted.  Here’s to smarter training!

The plan was to run Tokyo in February, one before fasting month, Kuala Lumpur Marathon in August, Penang Bridge in November. I was down with a lengthy injury after Tokyo Marathon where I could not run properly at all. I was sidelined for long, then I became a father, and my only sister got married. There was not enough time to train for marathon. Then I ran Kuala Lumpur and Penang Bridge Marathon should have been my last marathon of the year. Few weeks before Penang Bridge Marathon, injury struck again. I tried to shake it off by taking a break from running for more than 10 days but I did not recover in time. In the end, I only ran 2 marathons in 2016.

500 kilometres in January set the tone right. Then I hurt my ITB after Tokyo Marathon and only did minimal running for two months or so. I ramped up the mileage in May trying to clock as many mileages as I could for Kyserun Krew May Miles Maniac challenge. Then the mileage dropped again during fasting month. In preparation for Penang Bridge Marathon, I took up FIRST training plan which philosophy was to run high intensity workouts but less mileage. This was where I decided not to pursue the goal I set. I end 2016 with 2872 kilometres, well short of my goal.

I did it during TM Fan Run where I finished 4th with a 10k PB of 41:46. Although I improved my timing during Mizuno Wave Run where I ran 41:43, I did not take it into account as I did it in the last 10 kilometres (the race was overdistanced by at least 500 metres).

I raced less than I did in 2015. I was only concentrating in running full marathon, so no trail and ultra races at all. I raced 4 times only, two full marathons at Tokyo and Kuala Marathon, two 10k at TM Fan Run and Mizuno Wave Run. I did run two half marathons though at Nike WeRunKL and MHWH Putrajaya but both were run as part of my training.

2017 is going to be almost the same. Focus will be solely on full marathon. It is going to be a more challenging year definitely where I plan to better my marathon PB, stay injury-free, and run a lot farther.