Over the past few weeks I’ve put about 30 miles on a pair of Hoka Clifton shoes, making it the first pair of Hokas that I’ve logged more than a single run in. As a more minimal-oriented runner I was quite curious to see how I’d fare in a shoe at the more maximal end of the spectrum (at least in terms of softness if not total stack height). The experience has been an interesting one so far and has given me a lot to think about. I plan to write up a full review of the Cliftons soon, but wanted to share a few thoughts on my general experience of running in them. I’m also curious to see if others coming from a more minimal background have felt similarly about running in soft, cushy shoes like the Clifton. Here goes! 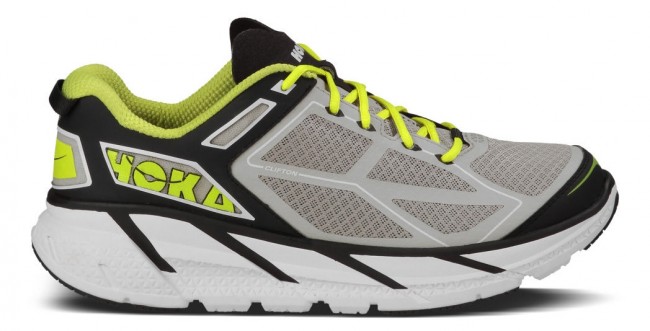 1. They don’t seem to alter my form much. My cadence seems to have stayed right around it’s typical range. If anything, I actually feel like I may be a bit more up on my forefoot when running in the Cliftons, and this is supported by the fact that most of my sole wear so far extends from the midfoot forward. Not sure if this is because of the rockered sole (the sole is slightly curved so that the forefoot and heel angle up a bit from the midfoot – you can see this in the image above), or that the heel feels so soft that my body wants to avoid landing directly on it. The Clifton is a bit lower profile than some of the other Hoka models (stack height is 29mm heel, 23mm forefoot), but I recall feeling similarly about my one run in an old pair of Mafates (a big, cushy Hoka). My money is on the sole rocker being the major factor here. Anyone else feel this way about Hokas with regard to foot strike?

2. I like them better on trails than on roads. This is counterintuitive to me as I would expect a soft shoe to feel better on a harder surface, but I’ve generally enjoyed running on a trail surface in them more than running on asphalt or concrete

3. Stability has been fine except when I step on an edge. Again, the Cliftons don’t have as much sole thickness as some other Hokas, but they don’t feel like an unstable shoe to me. That being said, there have been a few times when I’ve stepped on the edge of a sidewalk and rolled my ankle a bit – the wide sole base and resulting long lever arm relative to the ankle probably plays a role here. On a trail they pretty much seem to conform to irregular ground debris by squishing over whatever I step on. You don’t feel much underfoot due to the soft, deformable sole.

4. The ankle collar feels a bit high. I’ve heard others say this about some Hoka models, and I think what my be happening is as the foot sinks into the soft midsole it causes a sensation of the ankle collar being higher than in other shoes.

5. Here’s my biggest observation – when I run roads in the Cliftons I feel like I’m working a lot harder than I should be at my easy pace. I think this is where the fact that I tend to be adapted to more minimal footwear comes into play, as I felt the same way about running in the Skechers GoRun Ultra (probably the most comparable shoe to the Clifton that I have used for more than a few runs). The Cliftons feel really soft in the midfoot and heel, and this seems to take some of the pop out of my stride. Conversely, on one run when I picked up the pace a bit they felt better, perhaps because I was more up on the front of the shoe. I’m wondering if this would change if I gave them more time, but my body seems to like firmer, more responsive footwear. The question for me is whether that’s because those are the shoes I’m used to, or if there is something inherent to my stride that makes me prefer a lower profile shoe. I’d love to see a study look at oxygen consumption in runners with various footwear backgrounds in their typical shoes versus in a super soft shoe like the Clifton.

How about you? Would love to hear about your experience running in Hokas – leave a comment!

You just finished reading 5 Observations On Running in Hokas From a More Minimal-Leaning Runner! Consider leaving a comment!