5 Things I Learned From Running A Trail Race Last Weekend 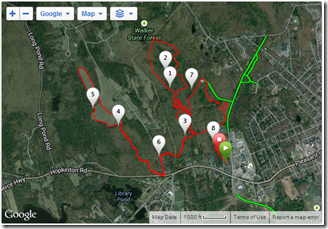 It’s been a long time since I’ve run a long trail race. I paced for about 7 miles last year at the Vermont 100 (my runner dropped), but the last trail race longer than a 5K that I ran for myself was the HAT Run 50K back in 2011. I forgot how much fun they are.

On Saturday I ran the Ralph Waldo Emerson Preschool “10-mile” trail race – I put the distance in quotes for reasons I’ll get to below. My two older kids attended Emerson when they were younger – we love the school, and they started a trail 5K last year as an annual fundraiser. I didn’t run the race last year, but when I heard they were adding a 10-mile option I couldn’t resist. Given my connection to the school, and the fact that the race was on trails I’ve run and hiked a bunch of times, I decided to make a donation as a race sponsor and run the long course race.

Rather than do a traditional race recap, I thought I’d write up a list of things I learned (or was reminded of) during the race:

1. Trail races are a blast. This was my third race so far this year. The first two were road 5K’s, and both of those races scared me a bit. As I wrote in a post last week, 5K’s hurt, and I always feel a bit of apprehension in the days leading up to a 5K race. I felt none of that in the lead up to the trail race. My goal was to go out and have fun – the trails the race covered were difficult: lots of rocky and rooty singletrack, lots of switchbacks, a fair amount of up and down. It was a cold, rainy day. And as someone who runs mostly on roads (and races almost exclusively on them) I was a bit out of my element. All of these things tempered my expectations.

Once I got out on the trails and found a rhythm things started to click. I settled in behind another runner of similar pace and cruised. When you’re out in the woods, you kind of get in a zone where everything melts away and the only thing that matters are the rocks and roots on the trail and the placement of your next footstep (avoiding a sprained ankle becomes the primary goal on trails of the type that this race covered). It was incredibly fun, and reminded me how much I enjoyed the HAT Run 50K back in 2011. It may have also sealed the deal on my choice of races this Fall – an attempt at the Vermont 50K may be in order.

2. Road fitness does not equal trail fitness. I realized very quickly that though I can compete locally in my age group in the 5K, running up big inclines in the woods is a very different challenge. I’m reminded of this almost every time I run with Nate, and I found myself walking up a big incline about a quarter mile into the race – I figured I wasn’t going to lose much time vs. slogging it a slow jog pace, and by not sapping myself I’d be able to pick the pace right back up at the top. I wound up walking 3-4 times for short stretches, mostly when I could feel my heart about to pound through my chest. But I always recovered after a few minutes and was able to resume cruising pace.

What’s interesting is that my road fitness paid dividends on the one short stretch of roads we followed to access another trail, and on a rolling loop around a big field. On both occasions I managed to reel in a runner ahead of me, but I passed nobody while in the woods. I was chatting with another runner at the finish and he commented on how he hated the field loop – he indicated he runs mostly trails. Funny how our perceptions differed based on our typical training terrains.

3. Don’t trust a Garmin 620 GPS watch in the woods. I’ve run most of the trails that the race course covered in the past. I don’t know them well, but I had a general sense of location relative to surrounding landmarks. Around mile 7.5 I was on some really twisty trails that I knew were heading back down the toward the school and the finish line. The race was labeled a 10-miler, but the official course map on the race website listed it at 9.2 miles. I figured the trail must turn back and head up again to add in a final mile.

I was cruising pretty fast down a relatively wide, open trail (I kept catching glimpses of a runner a little way behind me and didn’t want to let him catch me). I turned a corner and the finish line suddenly popped into view. I was a bit shocked – it would be like suddenly hitting the finish line at what you think is mile 23 of a marathon. I crossed and turned to the timing table and said something like “Is this the finish?” As if the big flags labeled “FINISH” were some kind of joke. They assured me I was done, and I was happy (13th place, I’ll take it!), but my watch said 8.09 miles in 1:18:29.

I waited at the finish line for a friend who was a few minutes behind me, and chatted with some of the runners as they came in. A few were wearing GPS watches, and most had measured the course around 8.6-8.7 miles (one was wearing a Garmin 310XT, another a Garmin 305). I know that GPS watches can be sketchy in the woods, particularly on courses with a lot of switchbacks and twisty turns (even with 1-second recording turned on, which is what my watch was set to do). People have been reporting accuracy issues with the Garmin 620 – mine has worked fine on the roads for the most part, but it seems that it didn’t do so well in this instance. I’m still not really sure how long the race actually was since my course track recording did not match the one on the race website (the field loop seemed to be a new addition, some of the trails differed – there had apparently been some course vandalism the night before, not sure if that played a role in the changes), but it seemed my watch was consistently about a half mile short of what others had measured. I don’t think I missed a turn or anything either since I was pretty consistently in sight of people ahead and behind me. This is definitely something I need to test before I write a review of the 620.

4. Focusing on local races has invigorated me. For the past several years I’ve focused on running marathons, usually not locally, and usually by myself. I’ve now run three local races in the span of four weeks, and I’ve been loving it. I get to see friends regularly, I get to test myself more frequently, and I’ve come to appreciate how tight-knit my local running community has become. I enjoy racing on roads and trails that I know well. I like being able to support local causes. Running has become incredibly fun again, and that makes me happy.

(If you liked this post, go read “6 Things I Learned From My Last Ultra-marathon” by Nick Jenkins. That post inspired this one.)