A Dog Running Milestone: Jack Breaks 20 Miles in a Week 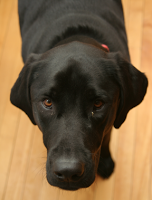 In an earlier dog running post, I talked about how my favorite running partner is a 2-year-old black lab named Jack. He’s an awesome pup (most of the time!), and an enthusiastic runner. Until this summer, Jack would accompany me on runs once or twice a week, and it was usually at times when I needed an excuse to take it easy (I try not to push him too hard). Though 5 miles is our standard distance, he’s handled runs up to about 7 miles without a problem, and in cool weather seems to have very good stamina.

The one problem I have in terms of running with Jack is that, like most dogs, he doesn’t tolerate heat very well (having a black coat in the sun doesn’t help). On hot, humid days, he prefers to park himself in a shady spot and sleep, so my expectation going into this summer was that I wouldn’t be running with him very much. However, the weather gods seem to have decided that summer is going to be skipped this year in NH, and the cool rainy weather has necessitated that Jack get his exercise in ways other than tearing up the soggy yard with his doggy buddies.

As a result of the dreariness, Jack has become a fixture on my daily runs. Unless I plan to do intervals or some other form of speedwork, I have generally taken him with me. He’s become a model running dog (unless he sees a squirrel, cat, turkey, or a pile of rotting food, in which case I risk losing an arm!), and generally stays by my side while on-leash. Most days, we head down to a trail by the Merrimack River where he can run free, and river swims help to keep him cool and allow him to get a nice mid-run drink. I now have a pretty good mental checklist of where streams are along the roadside so we can stop for a drink on our various routes if needed, and I try to shoot for 1 drink/swim for every three miles of dog running.

The big news for Jack as a running dog is that he just completed his first 20+ mile week! All told, Jack and I ran 23.21 miles together this week, and it’s getting to the point where I feel guilty not taking him with me on every run because he seems to love it so much. We’re still working on the whole pooping on the run thing (him, not me – see my previous Jack post), but I don’t know if there is any real solution to this problem other than to grin and bear it. My next goal is to find a race where we can run together – this would be a load of fun, and a great way for me to further bond with my best running bud!