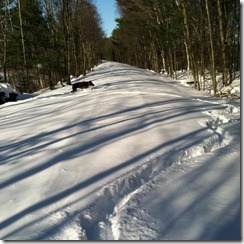 I now remember why Spring marathons have always been my nemesis. Back in early January I was full of motivation – the winter had gotten off to a relatively tame start (continuing a 2-year pattern that I expected would hold), and I was coming off of a great summer training cycle plus a Fall in which I had set a new PR in the Half Marathon. I let my training slide a bit after that race, but I was doing enough to maintain my fitness. After a 2 year hiatus, I was ready to tackle 26.2 once again.

My target race this Spring is the Vermont City Marathon in late May. It’s a race that I’ve run twice before, and on both occasions I crashed and burned around mile 16. I’m signed up, the hotel room is reserved, and I will be on the starting line. What happens beyond that is very much up in the air at this point.

My initial goal was to run a solid race, and maybe shoot for a PR if training went well. Well, life and winter have caused me to re-evaluate my plans. I started this marathon training cycle by asking my coach (Caleb Masland) to start feeding me weekly plans again. We had paused formal coaching after the Smuttynose Half Marathon last October since I knew I would be heading into a relative rest period through the holidays. The plans started arriving every Sunday, and though I can hit the workouts when I get to them, getting the workouts in has been a challenge. Particularly the long runs.

I could blame this entirely on the weather. The reality is that the past several weekends have seen some truly awful weather here in NH. First we had the storm of the century, which dropped over two feet of snow in a weekend in my town. I got in a long snowshoe workout, but an outdoor long run was impossible. Then we had a weekend of 20 degree temps with 40mph wind gusts. Caleb, to his credit, ran 25 miles in that. I, on the other hand, wussed out. This past weekend we got hit with another foot of snow. Such is life in northern New England. You either suck it up, or sit on the couch. Lately, I’ve been succumbing too often to the latter.

The obvious solution here would be to move my long runs to another day, but fitting them into my schedule during the week has been tough. It just hasn’t been happening. Hitting the treadmill is another option, but my basement ‘mill isn’t functioning properly right now (I think it’s a sign given how much I hate that thing with a burning passion).

So yes, I’m whining. And no, I don’t want sympathy. What I want is to publicly state the excuses that I keep making to myself in the hope that it will prevent me from continuing to make them in the coming weeks. I have 26.2 miles to run in May, and I will complete that race. My goal of a PR may not be realistic, so I’ll settle for finishing it without hitting the wall, regardless of time. If nothing else I will have a solid base heading into the Summer and Fall racing seasons.

I’m heading to Disney World on Thursday for a bit over a week, so weather will not be an obstacle, but I may need to get up early to run so as not to disrupt family plans. I just wish I was a morning person (yes, another excuse!). My hope is that when I return hints of Spring will have arrived in NH, and runs will come easy.

You just finished reading A Post In Which I Air My Excuses for Not Running Enough this Winter! Consider leaving a comment!