Home / Blog Posts / Acclimation to Running in Minimalist or Barefoot-Style Shoes: Is Form

Acclimation to Running in Minimalist or Barefoot-Style Shoes: Is Form Change Instantaneous, or Does it Adapt Over Time? 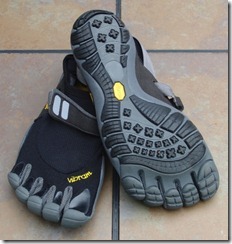 One of my biggest complaints about many of the scientific studies of barefoot and/or minimalist running is that they far too often fail to account for the possibility that form change is a prolonged process. They might take a habitually shod runner, ask them to remove their shoes, and have them run without any prolonged acclimation period to the new condition. My take is that it is highly unlikely that you will get a fluid representation of running form in the new condition if adaptation time is not allowed. This is particularly problematic in studies of running economy, as I would fully expect that individuals will be less economical if asked to perform a novel movement patter on the spot.

Applying this to the situation of a traditionally shod runner looking to work on their running form, putting on a pair of Vibram Fivefingers or similar barefoot-style shoe may not result in an instantaneous change. I’ve seen more than a few people in the race videos I have recorded who are heel striking in their Vibrams (e.g., see video below). This suggests to me that there is a learning component involved, and argues further that such a transition should be made both carefully and gradually.

An alternative hypothesis to that presented above is that heel striking is normal for some runners, and that they will do so no matter what they put on their feet. Indeed, in his well known study of barefoot vs. shod running, Daniel Lieberman of Harvard did observe some heel strikes among the habitually unshod Kenyans that he filmed (on a dirt road). Regardless, it is highly unlikely that any individual will overstride while barefoot and land on the heel with a highly dorsiflexed foot on a hard surface like a road (as is so often seen in runners wearing heavily cushioned shoes) – to do so would likely be a quick path to a calcaneal fracture.

One of the often overlooked aspects of Lieberman’s publication in Nature was the supplementary data that was included with it. Within this addendum was a section about a study he conducted looking specifically at the question of “if and/or how habitually shod RFS runners change their strike when they
transition from wearing running shoes to minimal footwear.”

Lieberman and his colleagues recruited 14 runners (avg. >20 km run/week) and provided each of them with a pair of Vibram Fivefingers Sprint shoes (the study was partially funded by Vibram). The subjects were provided instruction to increase mileage in the shoes very gradually over the course of six weeks, to a maximum of 16-20 km per week. They were provided no instruction on how to run in the Vibrams, so any change that occurred was due to experience running in the shoes (i.e., acclimation or learning). Subjects were each filmed prior to the six week trial period, and then again after the six weeks were over.

Lieberman et al. found that “over the course of the 6 week training period the plantar angle of the foot at strike transitioned to being 7.2° ± 3.2 s.d. more plantarflexed (p<0.05), and average ankle angle at impact became more plantarflexed by 5.6° ± 3.6 s.d. (p<0.05).” Furthermore, foot strike patterns changed as follows:

These results show that on average form changed significantly over the course of the six weeks of running in the Vibram Sprints. If we assume that the two forefoot strikers at the outset remained forefoot strikers after six weeks, then 7 of the 14 individuals changed their footstrike from either rearfoot or midfoot to forefoot/toe after acclimating to the shoes. Five individuals remained heel strikers. It’s worth noting that heel striking is more a spectrum than a category (e.g., variation occurs in joint angles, foot dorsiflexion), but from the data provided it is impossible to tell if the nature of the heel strike in these individuals changed. However, the fact that plantar angle of the foot relative to the ground was significantly flatter on average after the trial suggests that change in extent of heel strike may have occurred in these individuals as well (increased plantarflexion is commonly observed when shod runners are asked to run barefoot, even if they still heel strike – see De Wit et al., 2000 for one example). My own observations would also support this possibility – runners like the one in the video above who heel strike in Vibrams tend not to be highly dorsiflexed at the ankle upon ground contact (certainly not the 45 degree angle between the sole of the shoe and the ground I see in some people).

Before anyone screams that the study was funded by Vibram, thus the results are suspect, let’s take a look at another study (Squadrone and Gallozzi, 2009)that compared experienced barefoot runners while running barefoot, in Vibrams, and in traditional cushioned shoes. They found that when running in Vibram Fivefingers, the runners had a significantly more plantarflexed foot at ground contact when compared to running in standard cushioned shoes. Thus, the adaptations observed by Lieberman et al. are perfectly in line with what experienced barefoot/minimalist runners do.

What all of this suggests to me is that there is an adaptive response to running in an ultraminimal shoe like the Vibram Fivefingers, and that this response may take time to manifest itself. The fact that two people landed on their forefoot at the outset suggests that adaptation was immediate in these individuals (don’t know their pattern in cushioned shoes). Furthermore, the fact that some people altered foot strike after six weeks in Vibrams whereas others did not could reflect the fact that some individuals will heel strike no matter what (as a few habitually barefoot Kenyans observed by Lieberman did), or that adaptation occurs at different rates in different people (as I always like to emphasize, when it comes to biology, variation is the norm).  It would be interesting to do the same study over a longer period of time, and also a parallel where some people were instructed on typical barefoot-style running form. This could help to further answer some of these questions.

Perhaps most importantly, these results, although published only as supplementary data and not as an actual journal article, make me suspect of any study that compares form in individuals based upon an “on the spot” change in footwear condition. Ingrained movement patterns can be difficult to change (ever try to write with your non-dominant hand? – really tough, but apparently it can be learned with time), and the ease with which form change might occur is probably highly variable from person to person. So, if you have the goal of modifying your running form by running barefoot or in ultraminimal shoes, be aware that though some changes may occur instantly, progressive change may continue to occur over a long period of time. Just how long it might take can be difficult to predict, and patience is therefore critical. Pushing too hard for a rapid change might just land you in a doctor’s office!

You just finished reading Acclimation to Running in Minimalist or Barefoot-Style Shoes: Is Form Change Instantaneous, or Does it Adapt Over Time?! Consider leaving a comment!