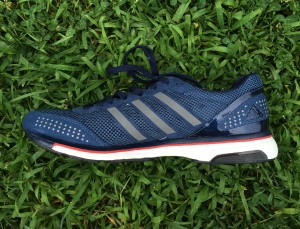 The Adios is adidas’ distance racing flat. It’s a shoe that can be found on the feet of many of the top elite adidas sponsored marathoners, and last year they released a version with a midsole composed of their recently introduced Boost material. I’d heard a lot of positive praise for the shoe from friends, and despite the fact that it had a higher drop than I typically prefer in a speed shoe (10mm), I wound up loving the ride. In fact, along with the New Balance 1400v2 and Newton Energy, the Adios Boost was one of my top 3 road shoes from 2013.

The Adios Boost had a perfect combo of a soft heel and a firm, responsive forefoot. It ran incredibly smooth, and the fit was dialed in on my feet. Pretty much a perfect shoe for my taste, and the 10mm drop did not bother me at all (probably due to the soft heel and the fact that the relatively thin forefoot provides good ground feel; or maybe just that since dialing in my form by going more minimal I now feel I can run in just about anything). 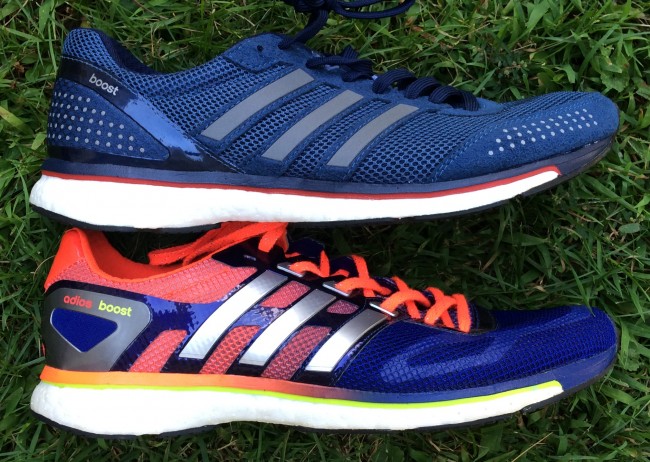 adidas released version 2 of the Adios Boost earlier this year, and I again heard positive responses from other runners. In particular I heard praise for the new upper, which was supposedly a bit softer than the somewhat stiff, scratchy upper on version 1. I bought a pair to give them a try, and have now put about 40-50 or so miles on them, including a long run of 15+ miles and some speedwork on the track. Mainly what I’m going to do for the rest of this review is compare version 2 to version 1, and highlight major differences (there are only a few, one of which is important). 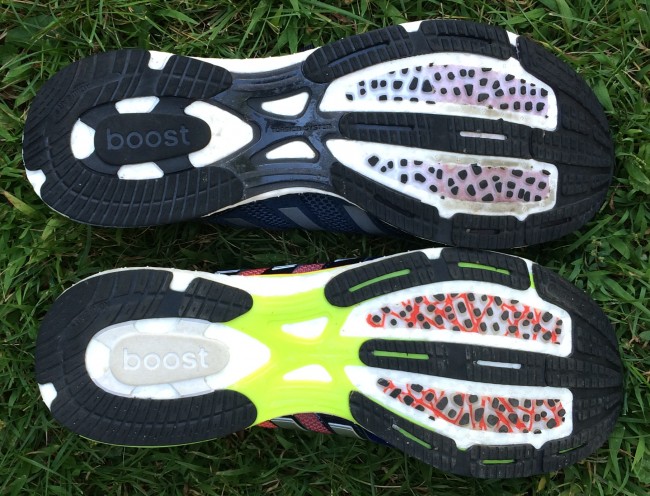 The biggest positive about the Adios Boost 2 is that adidas did not mess with the ride. As far as I can tell, the sole appears to be identical, and stack heights are the same (23mm heel, 13mm forefoot). As with version 1, weight is right around 8oz in version 2. Like it’s predecessor, the heel is soft, the forefoot is firm, and I’d describe the ride as responsive when you pick up the pace (they actually feel really good on the track). If you’ve never tried a Boost shoe before, it has a bouncy feel to it, and it retains that feel in the cold, which is a big plus for the material. The bounciness is not noticeable in the forefoot since it’s pretty thin. 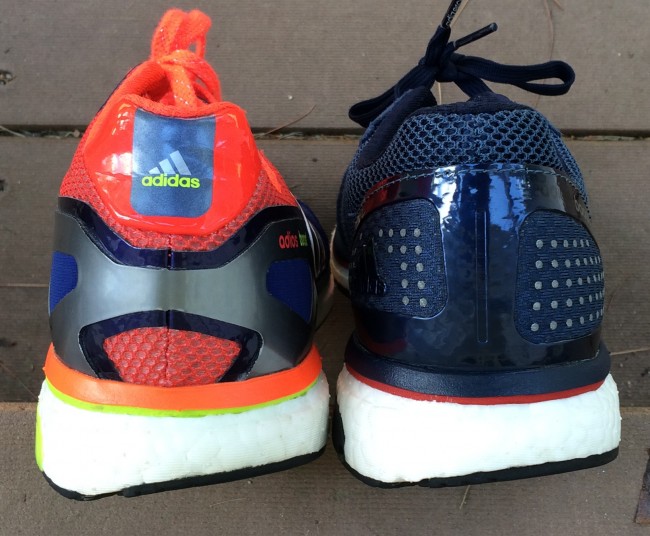 The upper and fit are where the adios Boost 2 departs from the original. The upper has been completely redone, and externally the material does feel a bit softer. However, it is still somewhat scratchy internally and I would not personally attempt running sockless in this shoe. And whereas v1 relied more on welded overlays (including some of the adidas logo stripes), v2 has a more traditional stitched set of overlays. In v2 there is also a prominent faux-suede toe cap, and more traditional style lace rows made of the same faux-suede material. The shoe almost has kind of a throwback/vintage feel toe it – it looks great in a very understated way.

A couple of other upper differences worth mentioning. First, it’s hard to say for sure, but it feels like the heel counter in v2 may be a bit stiffer and rise a bit higher than that in v1. Also, the tab behind the Achilles tendon does not extend up as high in v2 (see photo above).

Probably the biggest change from v1 to v2 for me is fit. I initially bough v2 in the same size as I had in v1 thinking that it would be similar. Upon initially trying the shoes on I could tell that v2 was a bit tighter up front, but length did not seem to be an issue. I think the toebox is a bit more tapered, leading to a bit more toe squeeze (this is similar to how I felt about the non-Boost Adios 2 fit). After several runs, including a long run that led to some toenail bruising, I was ready to give up on the shoes. Somewhat fortuitously, adidas sent out a pair in size 10.5 for me to try (Disclosure: they were free media samples; I thought they were sending me Energy Boost 2), and after several runs in them I can confirm that fit is much better. So, if you were a fan of v1, I would definitely recommend going a half size up in v2 to accommodate the shape of the toebox. 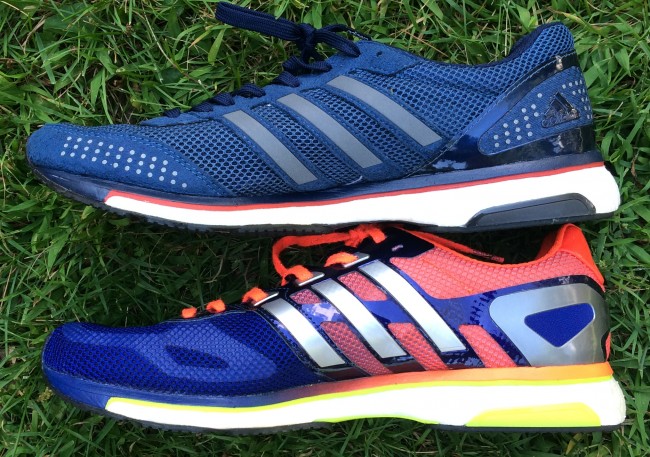 With the fit dialed in (half size larger), the adidas Adios Boost 2 provides the same great ride as v1. This is a shoe I could use for speed or distance racing, and I love the cushioned yet responsive feel of the sole. For some this might be a 5K racer, for others it might be a marathon racer depending on how much shoe you are used to. Aside from the tricky fit, my only major issue with the Adios Boost is price – at $140 it’s an expensive shoe for a racer. Adidas might counter that durability of the Boost material justifies the price, but that’s a call you will have to make if you want to try them.

The adidas Adios Boost 2 is available are at Running Warehouse and adidas.com. Outside the US it can be purchased from Wiggle. Purchases made via these links provide a small commission to Runblogger and help to support the production of reviews like this one – thanks!