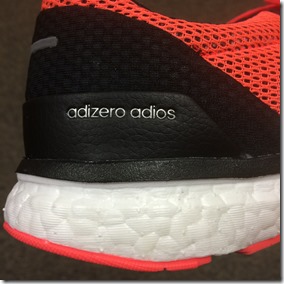 There are very few shoes in the $120+ range that I think are worth the money. The Nike Free Flyknit 4.0 is one, and the other that jumps immediately to mind is the adidas Adios Boost. The first two iterations of the adios Boost were personal favorites (see my reviews of v1 and v2) – they were do-everything shoes that excelled from speedwork on the track, to long runs on the roads. That’s probably to be expected for a shoe that graces the feet of many of the top elite marathoners in the world, but it’s a shoe that works just as well over a variety of conditions for a far-from-elite runner like me.

adidas was kind enough to send me a pair of the adios Boost 3 for review purposes, and I’ve been running in them regularly for the past few months. Like its predecessors, v3 is 10mm drop (23mm heel, 13mm forefoot), and it weighs in right around 8oz in men’s size 9 (per Running Warehouse). Similarities with v2 don’t end there, however. Although adidas made some minor updates to the upper and sole in v3, the changes are very minor, and the shoe essentially feels exactly the same to me. As such, I’m going to keep this review relatively short.

The thing I love most about the adios Boost is the sole. The heel is softish and cushy, but as the Boost midsole thins out under the forefoot to only 13mm, the feel is distinctly firmer and more responsive. Longitudinal stiffness from the midfoot forward is increased by the plastic Torsion System, and this helps give the adios Boost a snappy ride at faster speeds. 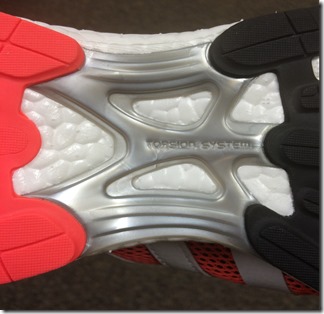 Torsion system extends from the midfoot to a bit under the forefoot.

Much like the New Balance 1400 and Asics Hyperspeed, I could use the adios Boost for races spanning distances from 5k to the marathon. It’s a very versatile shoe, and that’s one of the reasons I would justify spending $140 on it (that and the fact that the Boost midsole and Continental rubber outsole are quite durable – I think I could get more miles out of the adios Boost than the NB 1400 or Hyperspeed).

The upper of v3, though different, is very similar to that of v2. It has a throwback look that I really like, with a classic mesh and suede overlays. Like v2, the interior of the upper is pretty scratchy and not one that I would risk using without socks – this is one thing I’d like to see changed in a future iteration (NB fixed a similar problem in v3 of the 1400). The fit is not wide, but not so narrow as to be uncomfortable – going up a half size makes for a bit more room (I recommend sizing up in v3 as I did in v2).

Perhaps the biggest change in v3 is the outsole, though from a function standpoint I can’t really feel any difference. The durable Continental rubber compound is still in use in v3, though adidas added a bit more rubber under the forefoot, and got rid of the two strips of rubber nubs that extended from the midfoot forward in previous versions (see comparison photos below).

If you’re a fan of the adios Boost and liked v2, then you’ll most certainly like v3. Changes are minimal – in my opinion this remains one of the best all-around shoes on the market.  If you haven’t tried the adios Boost and are in a mood to spend a bit of cash, it’s definitely worth a look, and the combo of versatility and durability justifies the price (though I’d still like to see it drop about $20-$30 before I can rec it over shoes like the NB 1400 or Asics Hyperspeed). Kudos to adidas for not messing too much with a great shoe!

The adidas Adios Boost 3 is available for purchase at Running Warehouse. You can also customize a pair of adios Boost 3 at adidas.com (resisting the urge!!!).