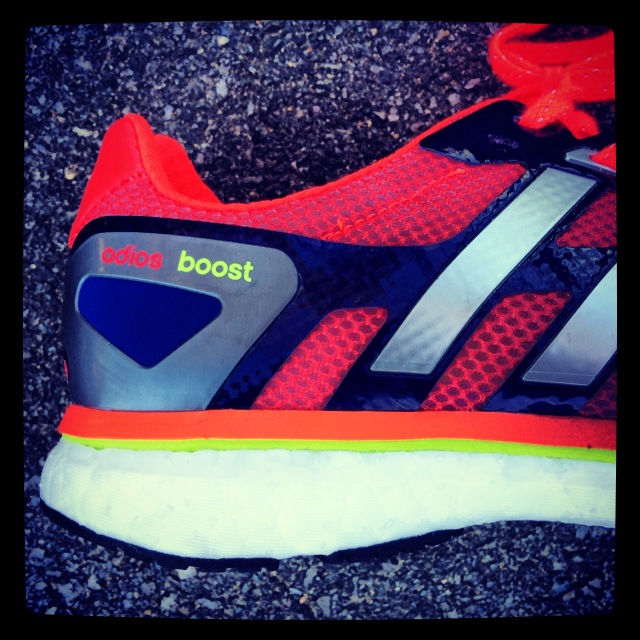 For quite a long time I’ve avoided most any shoe over 8mm drop from heel to forefoot. However, a few months ago I bought a pair of New Balance 1400v2’s after hearing positive things about them from friends (damn you John Schrup!). I never tried the 1400v1 because the drop was above my preferred range (I’m a bit of a dropist), but I wound up loving the v2. I’d go so far as to say that it’s one of my favorite shoes of the year. I still have issues with other high drop shoes, and have come to realize that I can tolerate a higher drop if a shoe is not overly stiff and the heel has some give.

What I love about the 1400v2 is that it has a soft heel and a firm forefoot, it’s lightweight, and the fit is just right for a performance shoe. The 9mm drop didn’t bother me much at all. Given this experience, I was intrigued by the adidas Adios Boost, which has a 10mm drop and looked similar in its construction (the fact that it was the shoe on Geoffrey Mutai’s feet when he won the NYC Marathon didn’t hurt…). I reviewed the adidas Adios 2 last year and was surprised by how much I liked it, though the fit was tight up front and the heel was a bit firm. I contacted adidas to see if I could get ahold of a review sample of the Adios Boost, and they agreed to send a pair out (Disclosure: these were media samples provided free of charge by adidas. Read more about my approach to writing honest reviews here.).

I was pretty hard on adidas when they first started marketing their Boost midsole material, and I still stand by what I wrote. Boost is different than typical EVA midsole foam in that it is composed of thermoplastic beads that are fused together. adidas claimed that the Boost midsoles would last longer, would not be as temperature sensitive, and would provide greater energy return than EVA. I didn’t have a problem with these claims as they can be validated by mechanical testing data. My issue was the implication that improved energy return from Boost would increase running economy and thus performance (they did not have data to link the mechanical testing data to actual physiological performance). There is still no published data that I am aware of supporting the ability of Boost to improve performance, though an abstract with scant details from a scientific meeting suggested a 1% improvement in economy in Boost shoes.

Anyway, I’m still a sucker for new shoe technology, and I was first sent a pair of the Energy Boost shoes by adidas. They didn’t work out for me at all. The midfoot was very tight, and there was way too much sole flare around the heel. The shoe got in the way of my stride big-time, and I only took them on a few runs. That being said, the Boost material did indeed feel different, particularly if I forced a pronounced heel strike. Very bouncy.

As a racing shoe, the adios Boost seemed like a better match for me, and it turns out that I was correct. I’d rank the adios Boost right up with the NB 1400v2, Newton Energy, and Saucony Virrata as one of my top shoes of 2013 (still deciding on #5!).

To be honest, the adios Boost is really quite similar to the New Balance 1400v2. They feel very similar on the run, drop is almost identical, and fit is similar as well. The big differences are that the adios Boost is about 1.5 ounces heavier (7.8 oz in men’s size 9 for the Adios vs. 6.4 oz for the 1400v2), maybe a bit stiffer/more responsive, and $60 more expensive (that to me may be the deciding factor here…).

So what do I like about the adios Boost? Mainly that it runs really smooth and disappears on my feet. The heel is very soft, and the forefoot is firm, and this is a combo that I like in a lot of shoes (already mentioned the 1400, but also the Newton Energy). I tend to land on the midfoot or very lightly on my heel and a soft heel makes for a very smooth transition for my stride (whereas a firm, inflexible heel like in the Mizuno Sayonara just doesn’t work with my stride). The firm forefoot feels great when picking up the pace. I much prefer the Adios Boost sole as compared to the overall firmer sole of the Adios 2.

I’d describe the fit of the Adios Boost as just right. The forefoot width is not too tight, not too wide (if you have wide feet they probably will not work for you), and I didn’t have any issues with toe squeezing.

I was a bit concerned when I first put these shoes on that the midfoot would be too tight. adidas shoes sometimes cause me trouble when the adidas stripes are sewn onto the upper, and I felt a bit of digging in the arch at first (this made the adidas Gazelle 2 a no-go for running for me). After wearing them around a bit the upper broke in/stretched and the sensation went away. I’ve had no blistering or abrasion in them on runs, so all seems to be ok. However, like the NB 1400v2 the interior of the upper is a bit scratchy and I wouldn’t advise running sockless in them.

One more thing about the upper – the adios Boost does have a hard heel counter, whereas the 1400v2 does not, so that’s something to consider if deciding between the two and you have a preference one way or the other. (I might add that the upper looks awesome, my wife even gave it a thumbs up which is rare among shoes I run in).

The sole of the adios Boost is really the selling point for this shoe, so I’ll address a few things about the Boost midsole.

I haven’t put enough miles on these to address durability claims, but I can speak to the temperature effect. I live in New Hampshire, and this time of year it’s pretty darned cold. Below freezing most days, and the low is projected to be right around O degrees Fahrenheit tomorrow night. Cold. A lot of shoes with EVA soles start feeling like bricks when you run in cold weather like this. They lose their cush. I can attest that the Boost remains bouncy when running in cold temps, but again you’ll only really notice it in the heel. To me, this might be the most revolutionary attribute of the Boost compound.

The outsole of the adios Boost has plenty of rubber, so I suspect durability of the sole to be very good overall. As mentioned, the sole has good stiffness and is responsive – I could see using it for races from the 5k to the marathon with no problem. There is a “torsion system” which consists of a plastic web under the midfoot with three prongs extending forward under the forefoot – these are likely responsible for the longitudinal stiffness you feel in this shoe.

I really, really like this shoe. A lot. My biggest concern is the price – at $140 MSRP are they worth spending $60 more than a pair of New Balance 1400v2 or maybe Saucony Grid Type A5’s? Not sure I’d go so far as to say that. They will garner some sales due to the heavy marketing of the Boost midsole, but prices are going to need to come down for me to recommend these highly over competitors. That being said, the adios Boost would definitely be a contender for me as a marathon shoe – it’s among the best I’ve run in this year.

Where To Buy (affiliates)