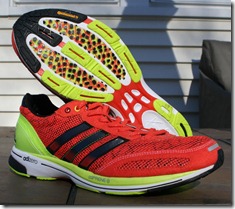 “Kenyan runners race in low-support shoes, but they mostly train in big, chunky, cushioned sneakers, just like your average, plodding Western jogger. Oddly, though, and contrary to Lee’s (Saxby) theories, these big shoes don’t force the Kenyans to run heel first. They virtually all run in a lovely, smooth forefoot-first style – what Lee would term “barefoot style.” The shoes, it seems, make no difference.

–Adharanand Finn, Running With the Kenyans

Several months ago I was contacted by a rep from Adidas inquiring if I’d be interested in reviewing a few pairs of shoes from their Adizero line. At the time, I suggested that the adidas Hagio seemed to be my kind of shoe (and it has turned out to be just that – see adidas Hagio review here), but they offered to send along a pair of the Adios 2 as well (disclosure: this shoe was a review sample provided free of charge by the manufacturer). I was really hesitant to agree to trying the Adios as it has a higher heel-forefoot differential than I typically run in (9mm drop – 24mm heel, 15mm forefoot according to Running Warehouse), but I was persuaded by the folks at adidas to give it a go. After all, it is the racing shoe worn by many of the elite African marathoners, so it couldn’t hurt to at least try the shoe worn by major marathon winners and World Record setters.

I really didn’t anticipate putting a lot of miles on the Adios. I suspected I’d wear it a few times, decide that I didn’t like it, and write a review saying as much. However, I’ve wound up running in the shoe quite a bit more than I expected(probably around 50 miles now), and am rather surprised by how it has performed.

I opened this review with a quote from the soon-to-be-released book Running With the Kenyans by Anharanand Finn. I’m only about 100 pages into the book (it’s fantastic so far – you can pre-order it from Amazon if you are interested), and he writes a bit about running form and footwear (Finn made a transition to barefoot-style form just prior to moving to Iten, Kenya for six months with his family). One of the things that surprised him is that despite stories of Kenyans running barefoot, most of the high level adult runners train in big, cushy footwear. Yet, he observes, they retain barefoot-style form (presumably learned through significant barefoot running in childhood).

How the heck does this anecdote about Kenyan runners and their shoes relate to a review of the adidas Adios? Well, I’m now about 1.5 years into my own transition to barefoot-style running form, and at this point I’ve come to find that I can run in just about anything and retain this style. I may heel strike a bit from time to time, more-so with some shoes than others, but my cadence stays high and I don’t tend to overstride regardless of the shoes on my feet. I can’t even force myself to do the heel mashing, 45 degree angle between the sole and ground that is so common in recreational runners wearing big shoes. Running in zero drop shoes now rarely causes me calf soreness. My new form seems to be ingrained, and it now just feels normal. The wear pattern on the Adios seems to support this – there is zero wear on the most posterolateral heel (see photo below), and the wear along the lateral edge extends from the anterior heel to the posterior forefoot. This suggests to me a midfoot strike to a mild heel strike in the Adios. Nothing like the days when I was running in heavy stability shoes with a 12mm lift – I used to trash the heels of shoes like that.

My runs in the Adios have for the most part been quite enjoyable. The shoe is fairly lightweight (just over 8oz in size 10), extremely firm, and it feels very responsive. It’s also a rather stiff shoe, more suited to racing than use as an everyday training shoe, but I can understand why this is a racing shoe of choice for many elite marathoners. It’s a shoe made for fast running. I can even see the 9mm heel differential as being useful for offloading the calf muscles a bit in a long race, particularly for those not used to running in flatter shoes. That being said, given a choice I would personally opt for less heel than what the Adios offers, particularly for training and any race shorter than a marathon (I used the Adidas Hagio for a 5K a few weeks ago and it worked out great – the Hagio is currently my favorite racing flat).

The Adios is not without its downsides however. The interior is scratchy and not suitable for sockless running, which is not a deal breaker, but given some of the great uppers out there nowadays I find it surprising when a shoe pays seemingly little attention to interior feel. My bigger issue with the Adios is that the toebox is too tapered at the front. The width is fine at the ball of my forefoot, but from that point forward the shoe tapers to a very distinct point, which causes considerable toe scrunching, particularly the little toe. Going up a half size might help with this, but I much prefer the forefoot shape of the Hagio to that of the Adios (I do feel like the Adios runs about a half size smaller than the Hagio, which might be part of the problem). If there is one single factor that would keep the Adios out of my regular rotation, the tapered toebox would be it (a bit surprising to me as I thought the heel would be the problem). 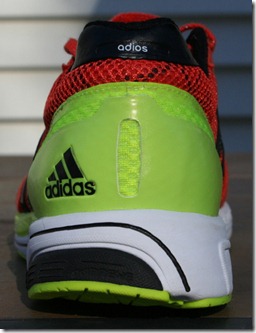 Perhaps what I have enjoyed most about the Adios is simply that, as discussed above, it has helped me to confirm that my running form has indeed changed. The fact that I can run in a shoe like this one and not tear apart the heel like I used to is somewhat gratifying.

The adidas Adios is not a shoe that I would recommend to someone looking for good ground feel, and it’s not a shoe that will do much to promote form change in those who are looking for some help from a more minimal pair of shoes. That being said, it might be a good first step for someone looking to transition slowly downward if they can handle the tapered toebox. It’s also a decent choice as a racing shoe for people who do all of their miles in more traditional 12mm drop shoes – it’s not as big a deviation from what they are used to as a flat with a lower differential. For minimalists, there’s not a lot in this shoe that will appeal, but that’s not really the target audience for a shoe like this. For me, the adidas Hagio meets my needs and fits me better than the Adios, so this is probably not a shoe that will see a lot of action on my feet going forward. That being said, I’m glad that I accepted the offer to try this one out.

For an alternative take on this shoe, check out the adidas Adios 2 review by Brian Martin at Running Technique Tips.

The adidas Adizero Adios 2 is available for purchase at Running Warehouse.