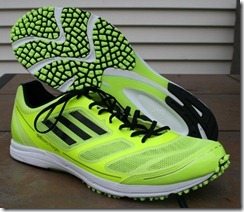 Over the past 2+ years I’ve probably run in 50 or more different shoes, but until recently none of them were made by Adidas. I was recently asked if there was a particular reason why I was avoiding the brand, and the honest answer was that there was no reason, I’d just never had the opportunity to try them. I don’t know if it’s that Adidas running shoes seem to be more popular overseas than they are here in the US, but Adidas has never been a brand that I tend to think of when it comes to running shoes.

A few months ago I was independently contacted by two different representatives from Adidas, one a shoe designer and the other a category manager. They offered to ship me out several pairs of shoes, the first of which I’m reviewing here in this post (the others were the Adidas Adios 2 and the ultraminimal Adipure Adapt – disclosure: all three shoes were media samples provided free of charge for review purposes).

I first read about the Adidas Hagio on the Running Warehouse blog several months ago, and my first thought after connecting with the folks at the company was that this shoe would be the one most likely to suit my running style. I was right – this is one impressive shoe. Let’s jump right into the review…

First off, if you are familiar with my taste in shoes, you’ll immediately know that this one is right up my alley. It’s a great looking shoe, and quite possibly the brightest shoe in my collection. This is one shoe that will stick out in any crowd – it makes the bright yellow coloring of the Newton Distance Racer or  Skechers Go Run look almost drab in comparison. The upper detailing is very nice, and the overlays are a shiny synthetic material that makes them really stand out from the surrounding mesh. As for the mesh, there is plenty of it, and the shoe is extremely well ventilated, particularly around the toebox.

Internally, fit and feel are excellent, though my one attempt at running sockless in them ended with several bleeding raw spots on my feet. Strangely, they didn’t seem to develop while I was running, but rather while I was walking home with my kids at the end of my run. The issues are the margins between the mesh and the cloth underlays inside the shoe (the edges of the light yellow strips visible on the toebox in the photo below) – they rubbed the tops of my big and little toes and the inside of the front of my arches the point of breaking the skin. Thankfully, wearing thin socks has alleviated this problem completely. The insole is thin, flat, and removable, so you could easily take it out if you wanted a little bit more interior volume.

One of my biggest concerns with traditional road flats is that they tend to be rather narrow. I’ve never had much luck with Nike flats, and though the Saucony Grid Type A4 had potential the fit was off for me, and it has caused me foot and ankle trouble on a few occasions. The one exception has been the Mizuno Universe, which in my opinion is one of the nicest shoes on the market (I now have the MWU4 and will be reviewing it soon). The Mizuno Universe is super light and has a generously roomy toebox for a road flat. I think I’m prepared to say that Mizuno now has a solid competitor in the roomy road flat category – the Hagio has more than enough room in the toebox for my feet. It feels roomier than the Saucony Kinvara to me, and is quite comparable to the Mizuno Universe in fit.

As for the sole, the Hagio midsole is very firm and fairly stiff. Usually that’s a combination that turns me off, but for some reason in this shoe the combination just seems to work perfectly. The manufacturer specs for stack heights are 23mm heel, 17mm forefoot (midsole only = 16mm heel, 9mm forefoot), but the shoe honestly feels flatter than that to me, and the shoe never seems to get in the way on the run. Because of the firmness of the sole, ground feel is quite good, and the grippy outsole pattern under the forefoot works great out on the roads.

In terms of weight, the Hagio comes in at just over 6oz, so definitely in the lightweight category, though not quite as feather-like as the sub-4oz Mizuno Universe. This is definitely a shoe built for running fast, but my early experience with them leads me to believe that they might hold up for longer distance races as well. My longest run in them so far is 8.5 miles, and I felt no unusual fatigue or soreness. I could easily see running a half marathon in these shoes, and might even consider a marathon with a proper amount of acclimation. 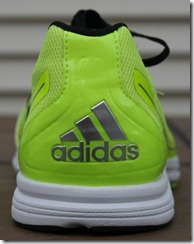 I must admit to being a bit smitten with the adidas Hagio. It’s lightweight, brightly colored, and plenty roomy for a road racing flat. I’ve found myself choosing to lace it up frequently on my recent runs, and it has more than earned a spot in my regular rotation. I don’t intend to banish it from my closet door shoe rack anytime soon (that’s the limbo where my old shoes that I’m not prepared to give away get put to rest…).

As I’ve mentioned a few times, the most comparable shoe on the market to the Hagio is the Mizuno Universe. The latter is lighter, slightly more flexible, and rides a bit closer to the ground. However, the Universe is priced $30 higher than the Hagio (MSRP = $90 for the Hagio), and the Hagio has a bit more outsole so durability might be a tad better. Both are excellent shoes, so a decision between them comes down mainly to personal preference. In any event, my first experience with an adidas shoe was overwhelmingly positive, and I can give the Hagio a big stamp of approval.

The adidas Hagio is available for purchase at Running Warehouse.