adidas adizero XT 5 Review: An adios Designed for the Trail 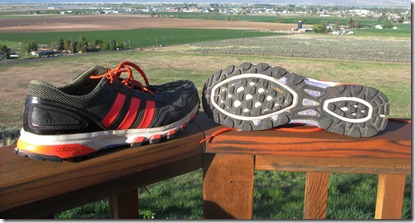 The adidas adizero XT 5 was a pleasant surprise for me.  I’d not seen much info about it until it just recently popped up on adidas’ website, and after looking it over I decided it was worth a try.

I had some previous experience with the adidas XT 3 and 4, but both of those shoes were much more substantial with deep lugged outsoles. They were also quite heavy (10+ oz.). With the XT 5, adidas stripped the shoe back (315 g in my size 13 which is usually around 8.5-9 oz in a size 9) and created a shoe that is essentially a trail version of the old pre-Boost adios 2 with a few key differences.  Read on to find out if this is a good thing (hint: yep it is!). 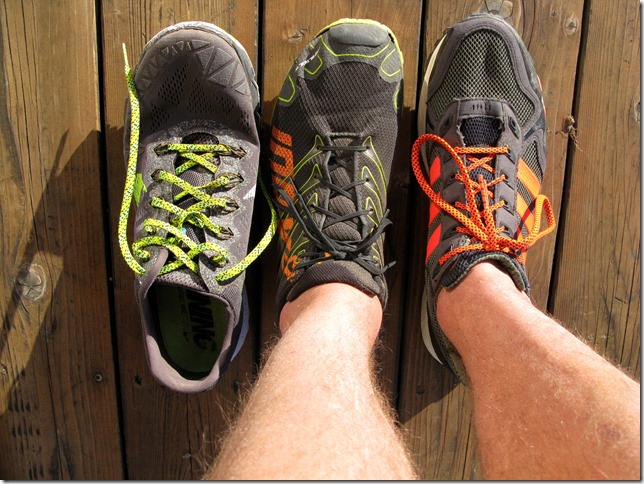 Fit looking down (XT 5 on right). Notice that I moved the entire lacing up one lace hole.  It felt a bit snug at the ball of the foot, and when I compared it to some of my other shoes that fit comfortably I noticed that the lacing on nearly all of my adidas went down towards the toes an extra lace hole; moved the laces up and fit is much better with no loss in security.  I do this to nearly all of my adidas shoes now.

If you’ve run in any shoes in the adidas adizero line you probably have a good idea of how the XT 5 fits.  It has a single layer mesh upper with the three stripes logo doubling as midfoot overlays. Of note as well is that the XT 5 is on the same last as the adios road racing shoe and fits quite similar, although I would say just a hair narrower throughout the shoe.  I think the biggest reason for this is that it has an extended toe bumper that doubles as a rand (a good idea for a trail shoe and it sharpens the edging when side-hilling). It is very much a racing shoe fit and if you haven’t had good luck with an adios, Boston, Hagio or Takumi Sen then you probably won’t like the fit of the XT 5.

I will say that the upper construction could use some work (which I feel is somewhat true for many of adidas’ shoes); mainly in the area of decreasing stitching and using a slightly “softer” feeling mesh. That being said, the upside of their upper construction is that it is simple, breathable and likely keeps the cost down ($100 retail for this shoe which is great). 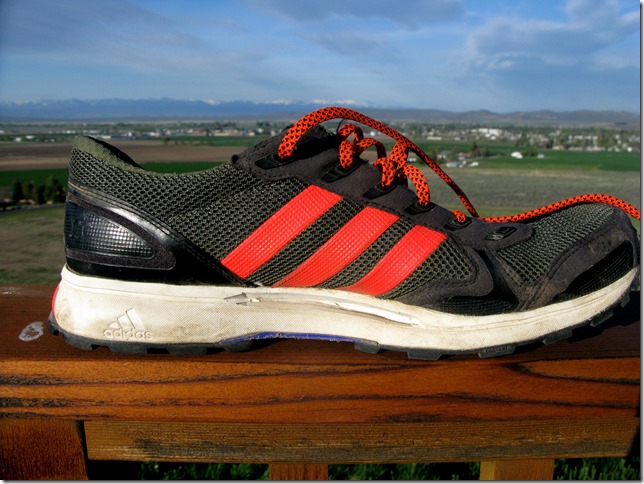 Modification to medial midfoot to reduce the midsole pushing into my arch.  Probably could do it cleaner next time.

I did have one small issue with the fit that dealt with the midsole on the arch area coming up too high and poking into my arch. This was especially noticeable while side-hilling and it caused some abrasion on my arch on a couple of runs.  I was able to pretty easily eliminate that with a razor blade by cutting away a bit of the midsole below the arch (see picture above).  I have a somewhat low arch so those with higher arches may not have any issues. 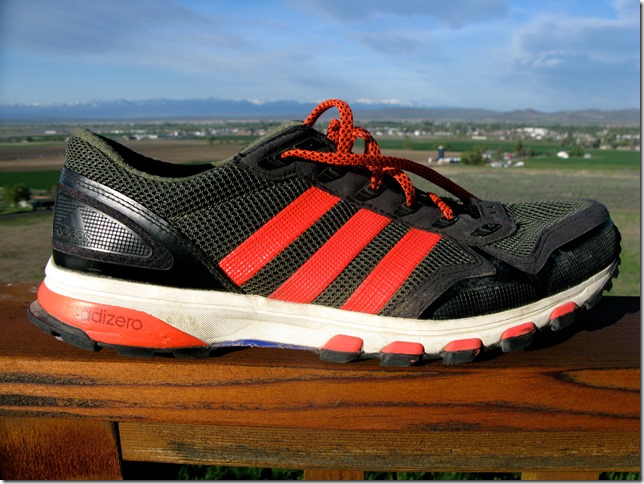 Great ride on this shoe with a very similar geometry to the adios.  Notice also the extended toe bumper that acts as a small rand all the way to the 3 stripes overlays…good design and really all the extra modification needed to a racing shoe upper to make it trail worthy.

This is where the adizero XT 5 shines, especially in the trail shoe category.  It takes a marathon racing shoe geometry (adios) and uses that as the blueprint for the midsole design.  It is, as far as I can tell, full length adiprene+ which is one of the most responsive midsole compounds I’ve come across. As a bonus, it’s protective from rocks as well (something Boost isn’t as good at).

The only change from the adios ride that is made on the XT 5 is that it is a little lower stack height and more flexible in the forefoot since the torsion system in the XT 5 doesn’t extend as far forward as the adios. The torsion system it is still there though, which is great for providing some structure to the shoe, protecting the midfoot from rocks, and preventing foot fatigue on longer runs.

All of this translates to a shoe that handles the more technical demands of trail and even mountain running because it is more flexible and deals with uneven terrain better than the adios 2 (which I also use on trails, both Boost and adiprene versions), but also runs like a road shoe when the trail smooths out. Not a lot of trail shoes can strike this balance very well! The ride is, by far, the biggest selling point of the shoe and is what sets it apart from many other lightweight trail shoes on the market. 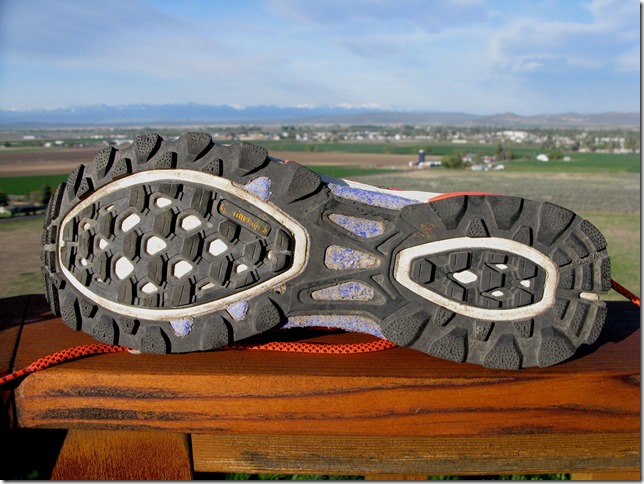 Besides being a fan of adidas’ midsole compounds, I also generally like their outsole designs and compounds. The XT 5 has three different compounds with their proprietary Traxion on the lateral and medial forefoot (outer forefoot “ring”), adiwear on the heel (heel “ring”), and Continental rubber (which is fantastic) on the ball and middle of heel. The latter is great for traction on rocks, even when wet.

The biggest change adidas made to the XT 5 outsole from v4 was that they significantly reduced the lug depth for v5. I think this was a good call as it makes the shoe run much closer to its road counterparts than the older XT models.  It has sufficient traction for technical terrain, but it handles hardpack great and even runs ok on the road.

Aside from a little refinement in the upper design and the midsole arch, the adizero XT 5 is really the type of trail shoe I’m looking for, would love to see more of, and I don’t understand why more companies don’t put out shoes like it. Take a marathon racing shoe geometry, add a very small amount of increased upper security (very small…too many overbuilt uppers), especially on the lateral forefoot, and put a full coverage, but low profile black rubber outsole on it.  For 80% of my trail running this is the type of shoe I want and suggest to most of the brands and shoe designers I’ve talked with.

I’d recommend the XT 5 to anyone looking for a performance trail running shoe, and especially to those trail runners that have run in shoes like the NB MT101/110 (the XT 5 is essentially the type of shoe I wish NB made with the 100 series) or Nike Kiger. Additionally, if you run in adidas shoes on the road, you’ll feel right at home with the XT 5 on the trail. The only thing I don’t understand is why adidas doesn’t take this approach with their other trail shoes (which are usually pretty chunky and more like hiking shoes, like the new Terrex Boost for example). If the XT 5 = adios trail, I’d love to see a Takumi/RC Trail (lower drop/lighter profile trail shoe for shorter races similar to the old adizero Rocket with just a slightly more trail specific outsole) and Boston Trail (a little more relaxed upper with a just a hair more cushion than XT 5).  A guy can dream right :)?  That said, adidas is making a push to put out some new trail shoes this summer, some of which made my preview post: Trail Running Shoes To Keep An Eye On in 2015.

When I personally bought the XT 5 it was only available on adidas.com.  It has since also become available on Zappos and Amazon as well as REI.com. It still is interesting to note that the distribution seems to be limited and it is carried under adidas’ outdoor line rather than their running line. I think this is a shame since it is a fantastic running shoe and should be marketed as such.  Trail running and “outdoor” are not synonymous