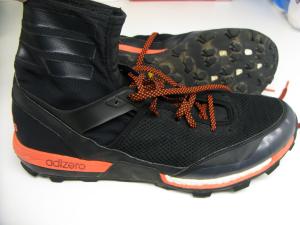 I’ve had a pretty long history with the adidas adizero XT line, having run in all of the XT models except for the first one (still keeping my eye on eBay for a pair). The shoes have evolved somewhat from the XT 2 and 3, which had a very versatile, all-mountain outsole that still runs super smooth on trails. XT 4 was more of a fell/mountain shoe with a fair bit of structure to it, and the XT 5 (review here) ran more like a marathon racing shoe with a few trail specific additions.  The XT Boost sets out in uncharted territory with a completely unique upper design, and the addition of Boost for the first time in the XT line.  Read on to see how it turned out. Discolsure: The shoes were provided free-of-charge for review by adidas. 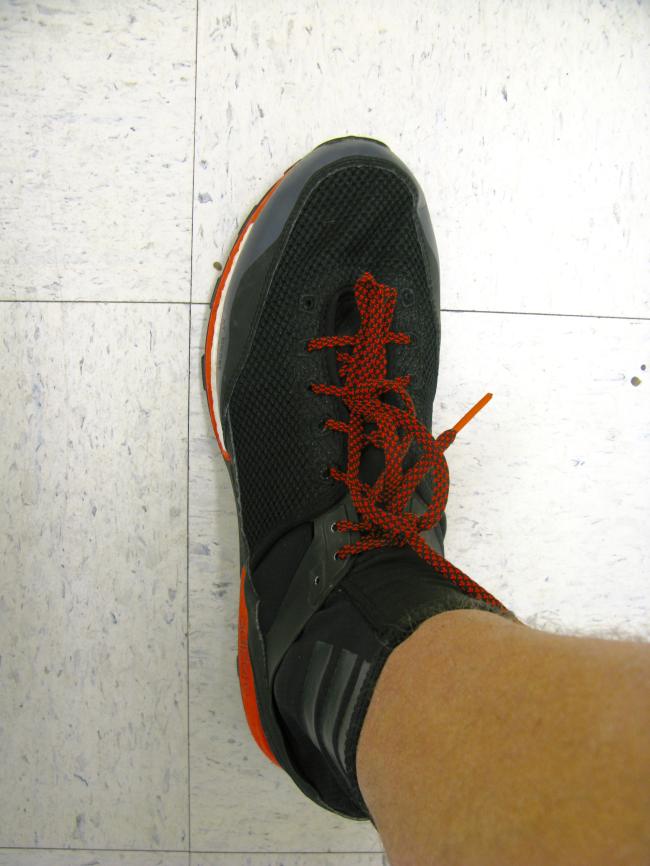 Fit is pretty typical of adizero lineup and just how I like it. Snug heel and midfoot with a medium toebox. 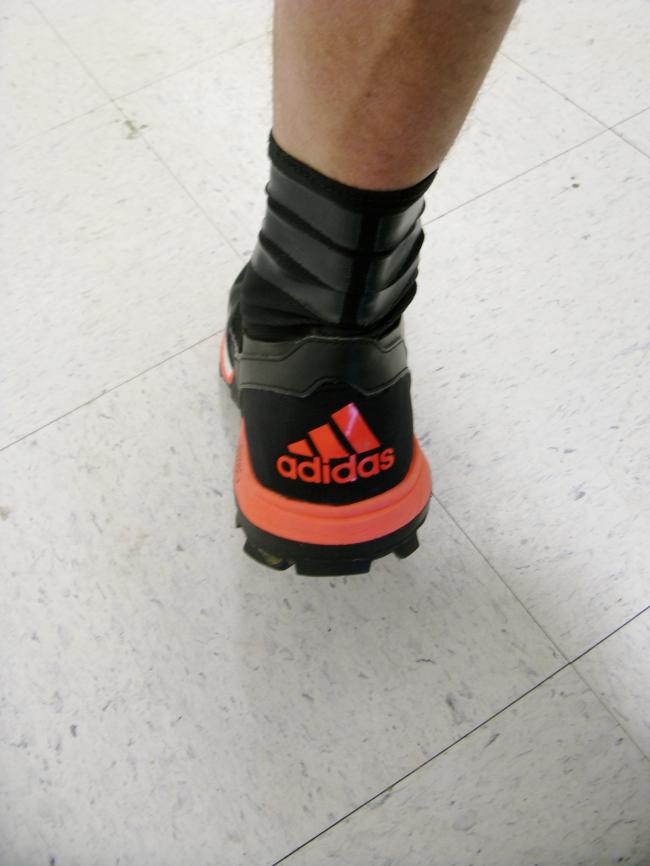 Gaiter is neither too tight nor loose, and is effective at keeping stuff out.

The XT Boost sports one of the most unique uppers on the market today.  When I first saw the shoe, I was a little leery of the upper and figured it would either work really well, or completely ruin the shoe.  After putting some miles on them I can say that I really appreciate the upper, and feel it is a real asset for the shoe. For example, sometimes I’ve reached for the XT Boost when heading out on a run simply for the extra coverage the built-in scree gaiter provides.  It keeps all debris out in the mountains in the summer and fall, and even did a pretty good job with a recent run in 3 inches of fresh snow (although the rest of the shoe is not intended for winter and is pretty breathable).

Aside from the gaiter, which is great, the rest of the upper checks most of the boxes for me and fits like most adidas in the adizero line (i.e. pretty close to the adios in fit – same last I believe).  The shoe is randed from the forefoot through the midfoot, holds the foot pretty well, and is sufficiently breathable.  It is not as seam-free as I’d like, but I still haven’t had any issues running in them up to 2.5 hrs without socks.

As an aside, adidas was planning on releasing a Primeknit version of the XT Boost with a full knitted upper – I was drooling over it, but unfortunately it was canceled before release.  Such a shame and I sure hope they reconsider releasing that shoe at some point!  Overall though, the upper on the XT Boost is a great example of a company trying something new, in a thoughtful way, and I think it pays off with a very unique and effective end result. 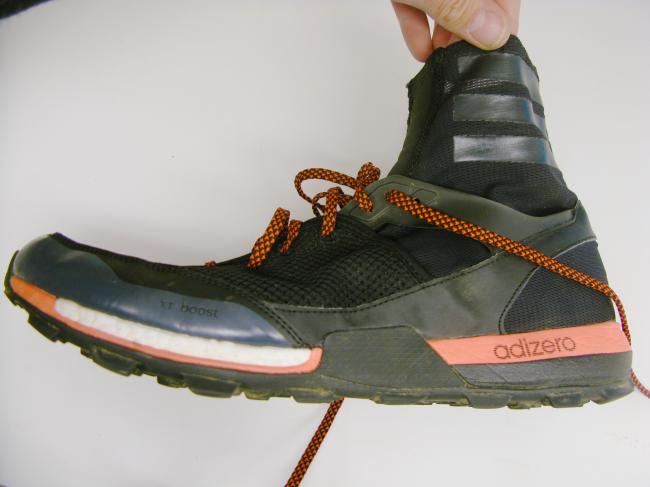 Great midsole with adios style geometry, Boost in forefoot and a unique randed, yet simple upper.

adidas usually excels in this area for me, and the XT Boost is no exception.  The XT Boost keeps a more marathon shoe midsole geometry like the XT 5, with a 10.5 mm drop (really 6mm would be ideal, but not a huge problem) and a pretty low forefoot stack height (similar to the adios).  The ride is quite different from the XT 5 though, and even from the adios Boost for that matter.  While still racy and fairly precise, the XT Boost is softer, less structured and more flexible than either of those shoes. It’s still protective enough for 50k, and maybe even up to 50 miles if one is used to lighter footwear.

With Boost just in the forefoot, it creates a more specific feel to the shoe with a firmer rear half and a responsive but more forgiving forefoot.  I usually like the opposite (firmer forefoot/softer heel), but I think in this case it works pretty well since Boost is still responsive, but gives the forefoot a good deal of flexibility which helps when climbing and on technical terrain.  The heel shape is probably the only area I’d tweak on the midsole.  I simply think it is too wide and bulging.  They could keep a narrower heel design and not lose any stability or ride quality. Other than that, even though I never had protection issues, I’d like to see a thin rock plate/torsion shank (like in the Terrex Boost, but quite a bit thinner) in the XT Boost. I think the extra protection and structure provided by a rock plate for long runs is worth the weight tradeoff.  If the shoe was sub 8 oz., I might reconsider (although I like rock plates a lot :)). 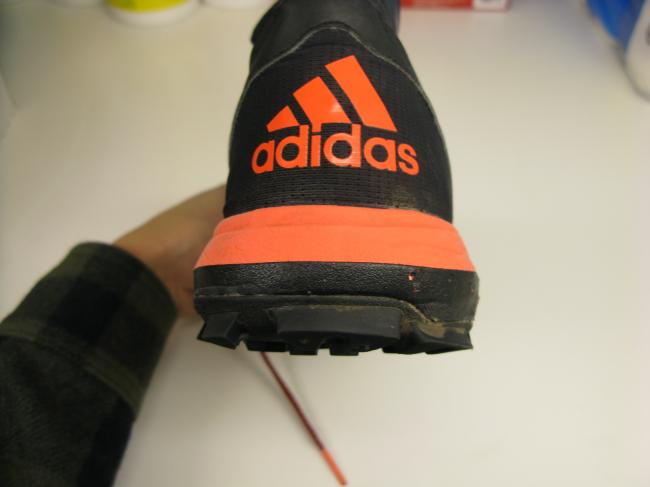 You can see the bulge of the heel design. One of the few things I don’t like about the shoe as I think it should cut pretty straight down following the line of the heel counter rather than flare out, especially in a shoe this light and nimble; it only gets in the way when side-hilling and on the downhill. Doesn’t ruin the ride, but could improve it if altered.

adidas’ partnership with Continental has been around for awhile, but I feel the new round of trail offerings for both 2015 and the forthcoming 2016 lineup are the best yet.  They are simple in design, full coverage, black rubber, with repeating lug patterns that run well while providing market leading grip.  The XT’s outsole is the most low profile of all the adidas trail offerings, yet is still pretty aggressive overall, and I would consider it to be an all-mountain type outsole.  It has the ability to run well on both trail and in the mountains/off trail while not firmly in the Trail or Mountain category.  These types of outsole setups are particularly great for routes that have you starting low on smoother trails and finishing on a peak or with off trail sections up high.  This outsole would be perfect for a race like the Rut 50k that I did last year where there is an equal mix of smooth single track and rugged off trail since it would not be unpleasant on either.  If you are looking for outsoles that provide great traction on a variety of surfaces, but don’t get in the way on smooth trail, the XT Boost, Terrex Boost and Response Boost have some of the best out there. 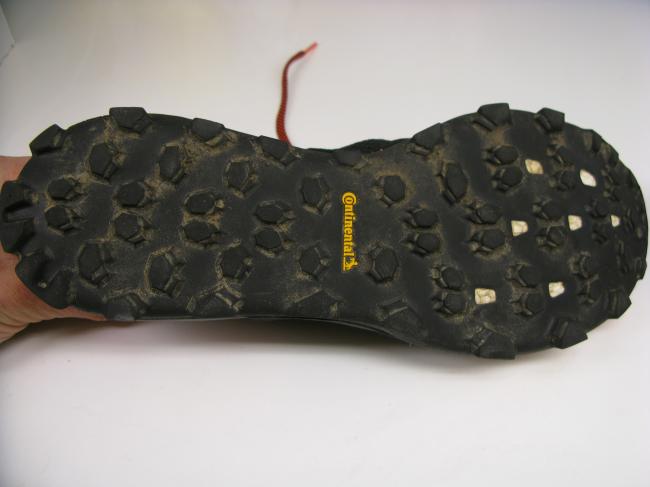 Great outsole design as with the rest of the recent adidas trail lineup. Don’t think they need to expose the Boost in the forefoot, but doesn’t hurt it a ton. Lug depth might be a tad much for this shoe, but adds to the versatility, especially with the gaiter on the upper.

Not much else to say.  I really like the shoe and it ranks as one of the best I’ve tried all year.  I’ve been wanting trail shoes with marathon shoe geometries for quite some time and the XT Boost is one of the few shoes that provide that in the current market.  The fact that they do it in a shoe with such a unique and effective upper even further sets it apart.  It rides like a mix of the adios Boost and to some degree the Takumi Ren 3 (which also only has boost in the forefoot), and has great traction for a wide range of conditions. It also runs decently even on the few road sections I’ve been on with it.  If you’re looking at a trail shoe on the lighter/faster end of the spectrum, this is the first shoe I’d recommend.

The adidas adizero XT Boost is available for purchase at Zappos in the US and Wiggle in the UK.