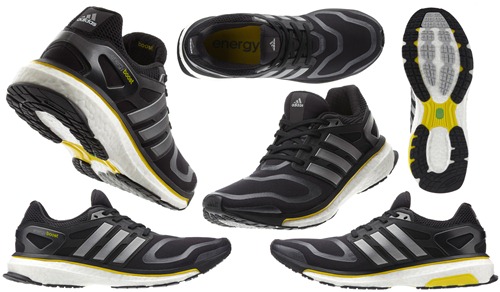 A few weeks ago I wrote a post about adidas’ new midsole technology that is being referred to as Boost. They formally introduced the Boost sole material in NYC today, and video of the event was streamed live. I just finished watching the video and a few things struck me.

1. adidas is not quite as polished as Apple when it comes to PR events like this.

2. A lot of claims are made about the energy return provided by Boost, but very little information has been provided to back it up. It’s one thing to claim that mechanical testing shows that Boost provides more energy return than EVA, it’s another thing to demonstrate that the midsole material actually provides a performance benefit when worn by a human runner. The latter would require physiological testing of running economy in runners wearing Boost shoes vs. similar shoes with an EVA midsole. Behavior of cushioning materials in mechanical tests does not always translate to how they perform on a human – as a simple example, humans can run on surfaces that vary widely in firmness and produce the same amount of impact. Why? Because we adjust things like the stiffness of our legs, muscle activation, etc. If Boost truly does provide a performance advantage, it shouldn’t be terribly hard to demonstrate with some simple experiments.

3. Following on the previous point, Haile Gebreselassie spoke at the event and jokingly commented that the IAAF is going to be asking adidas what’s going on with this shoe (i.e., an investigation of Boost’s performance enhancing properties – probably not what adidas wanted, or maybe it was?). This presents an interesting dilemma – if you’re adidas do you stick to marketing the energy return benefits of Boost based on mechanical testing only, or do you take the next logical step and show actual performance enhancing benefits in human runners. And, if you demonstrate the latter, might that lead to shoes using Boost being banned from elite competition? If the shoe truly is revolutionary (and it may very well be), what happens if someone runs a sub-2:00 marathon in it this year or next?

All of these questions are interesting to ponder, and will undoubtedly keep this shoes in the limelight as we head to the official release of the shoes later this month.

If you’d like to watch the Boost PR event, you can view the video below: