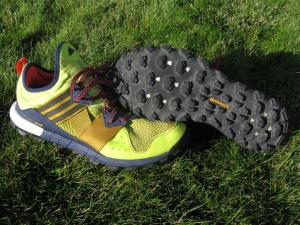 When I first saw the new Boost trail shoes that were set to release this summer, I automatically assumed the XT Boost would be my favorite and the Raven Boost would be an interesting option for longer outings.  I really thought the Response Trail Boost would not run well and wasn’t that interested other than out of curiosity and that I liked the look of the outsole.  After receiving all three for review and starting to get miles in them I came away with a much different take.  I came away surprisingly liking the Response Trail Boost much more than I expected to.   Read on to find out why.

Disclaimer:  The adidas Response Trail Boost was provided free of charge for review purposes by the manufacture.  All opinions about the shoe are my own. 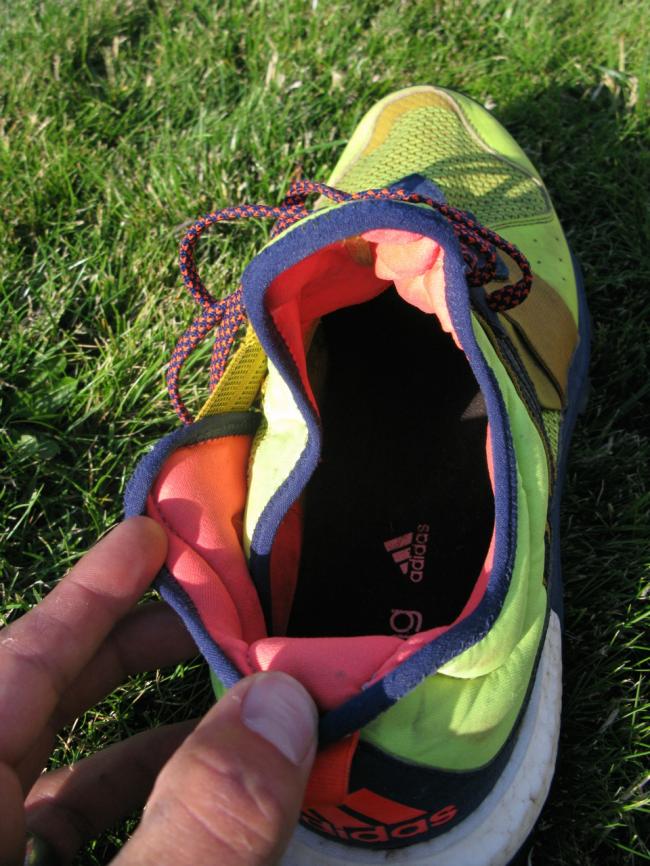 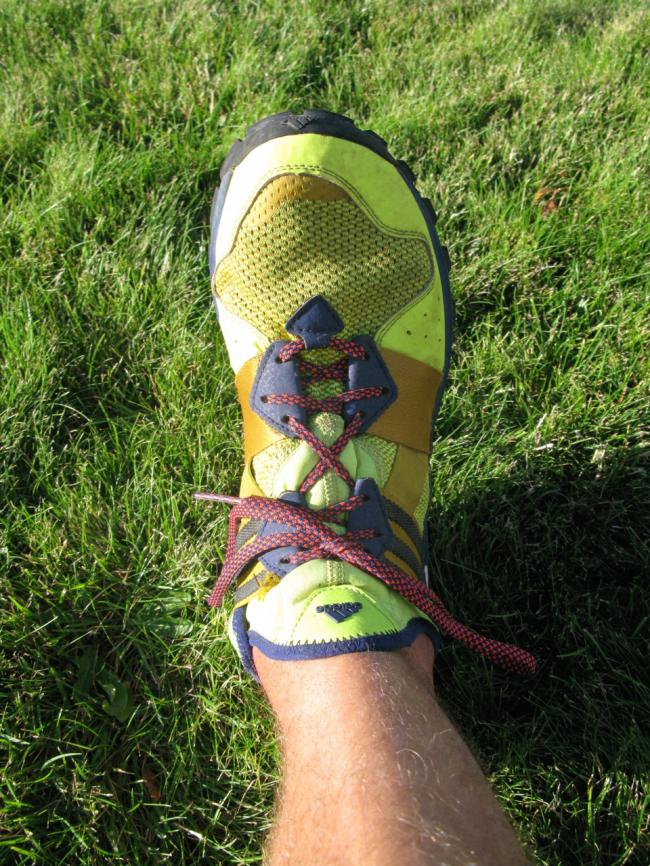 Good fit for me overall with a medium-roomy fit throughout. Could be a little lower volume in the midfoot and lighter, more functional overlays, but still works pretty well.

The upper on the Response Boost is an interesting one.  It definitely is an eye catcher and after first seeing the pictures of it I jokingly referred to it as using a mix of waterski boot design and seatbelt technology.  I’m happy to report it functions and looks much better in person!  It uses a soft padded material in heel and tongue and then employs a much more breathable mesh in the midfoot and toebox.  The upper is entirely randed (overlay material where the upper meets the midsole) which adds security and durability.  Additionally, the heel counter is very low as is the heel collar which, while still secure enough is very comfortable.  I used the shoe sock less (like I do for nearly all my runs) on a 4+ hr mountain outing summiting Chief Joseph mountain in the Wallowa mountains of eastern Oregon which featured 5,500 ft gain in 4 miles (translation=steep).  In addition this the Chief Joseph outing I also ran a 5 hr, 27 mile run the next week on flatter terrain and the Response Boost was equally comfortable on the relatively flatter, yet rocky, terrain.  While the fit is not quite as precise as I’d ideally like, it is one of the more comfortable shoes I’ve run in and does not feel sloppy.  It is noticeably wider than most other adidas shoes used and fits on the wider end of the medium fit spectrum of all shoes in the market.  I think the biggest improvement I could recommend for the upper is in the overlays.  While they provide a unique look, I think they are just plain overbuilt and the middle overlay that connects the other two, pretty much is useless in my opinion.  In addition, I think the lace eyelets need to be attached differently/more securely.  That said, it is still a really comfortable upper that doesn’t detract much from the rest of the shoe. 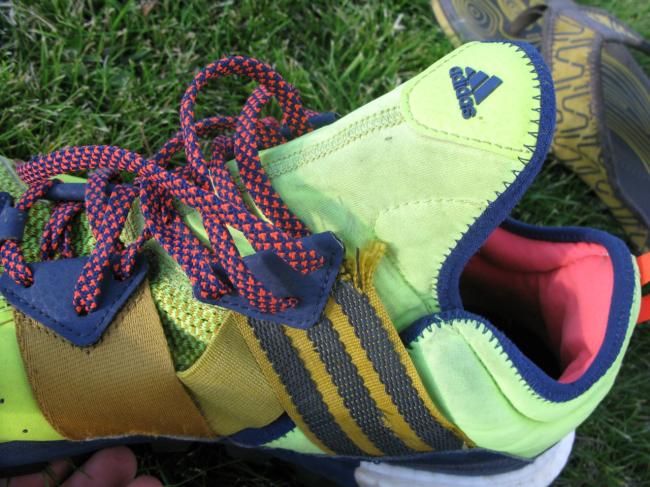 This frayed overlay was the only casualty on the upper, which could have been mostly the fault of my rugged route choice, but I feel also a result of the overlay design.

When I first received the shoes, I was worried that the ride would not be that great.  Instead of using Boost full length like most of adidas’ road models, the Response Trail only has it in the heel and in a rectangular patch at the ball of the foot.  In addition, the relatively higher weight heavily lugged led me to think the shoe would likely run heavy and unresponsive.  I’m happy to report that it possesses neither of those two qualities and instead is forgiving generally, yet still responsive at higher speeds (especially nice on downhills) and as not tippy nor  as clunky on more technical trail as it looks like it would be.  I was quite surprised that the patches of Boost actually work better than the full length boost found in the Raven Boost.  I think this confirms what many others have noted and I’ve found out myself:  Boost is a fantastic material, but without thoughtful and supportive design elements it doesn’t create magic just by itself.  For me the Ultra Boost road shoe and to a lesser extent the Raven Boost show that using more Boost is not necessarily better. 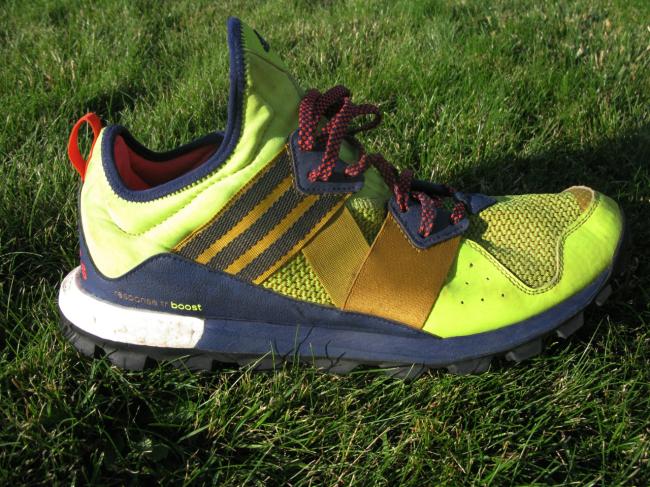 Boost in the heel which you can see. Boost in the forefoot that you can’t other than cutouts on outsole and if you lift the footbed up.

The outsole on the Response Trail Boost is one of the best all purpose, yet heavily lugged outsoles I’ve used.  I provides great traction on loose and rocky terrain, but still manages to run smoothly with plenty of float on dry and hard downhills.  I didn’t expect this on a shoe with this much lug and trying to figure out how they pulled it off (my guess has to do with the lugs on the perimeter being rotated lengthwise rather than sideways like the middle lugs). It has nearly every characteristic I look for in an outsole: evenly spaced repeating lug pattern, full-length coverage, and quality black rubber.  If there is any gripe, and this is minor, is the compound may be a tad soft for the type of shoe the Response is (heavier/training oriented).  That said, the softness contributes to better grip on rocks and additionally, the wear I’ve seen may be more an indication of the terrain I covered, which was very rough/technical, than the outsole itself. I’ve literally ripped lugs completely off of other shoes in similar terrain.  In short another hit from adidas on the outsole and this is true nearly across the board on the new Boost trail models. 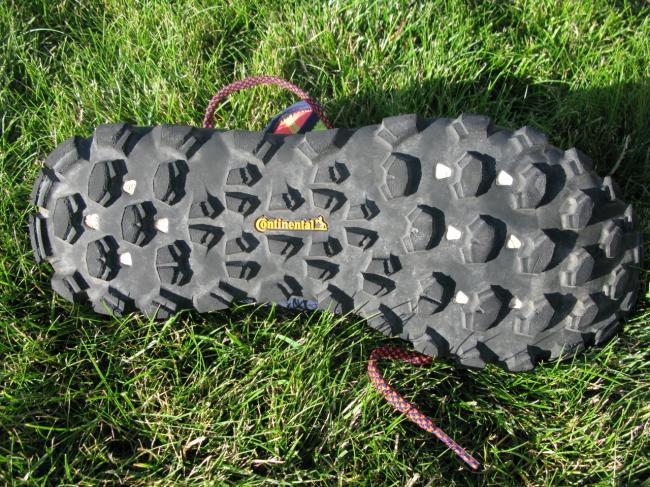 Great overall design. You can see Boost location at the cutouts in the outsole.

The adidas Response Trail Boost really surprised me.  It’s a shoe that gets the job done and has a unique look to go with it.  I think there needs to be some refinement in the upper overlays while trying to retain the comfortable qualities of the upper, but the ride and outsole are really quite good and don’t need any tweaking for what this shoe is designed for.  I thought that the Response might be the “budget” Boost trail model, but it turns out the lower price tag is no reason to not consider the Response Trail Boost and in the end is a big plus.  I highly recommend the shoe for its versatility on the trails and comfortable fit.  It is by far one of my favorites of the many shoes I’ve tried this summer.

Be sure to keep tuned to the blog for the reviews of the rest of the Boost Trail lineup (adizero XT Boost and Raven Boost) which should be up soon!

Any questions or comment about adidas trail models or the response in particular?  Let me know below!