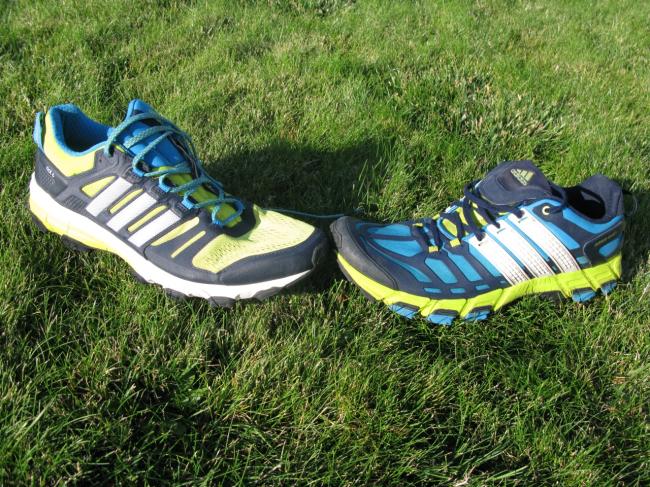 I’ve run in a lot of good shoes lately, and have many more that I’m testing for review later this summer/fall. In light of all of the reviews coming down the pipe, I thought it might be best do a double review of the adidas Supernova Riot 6 and the adidas Adistar Raven 3.  They are both models that I was unaware existed until recently. However, after seeing some of the models that are coming out this summer from adidas (Raven Boost, XT Boost, Response TR Boost; each will have a review forthcoming), I did some research into what adidas currently offered in their trail department – adidas trail running shoes tend to be relatively unknown in the US (at least they were to me), and I came away surprised. I wish I had heard about adidas’ trail lineup sooner!  On to the shoes… 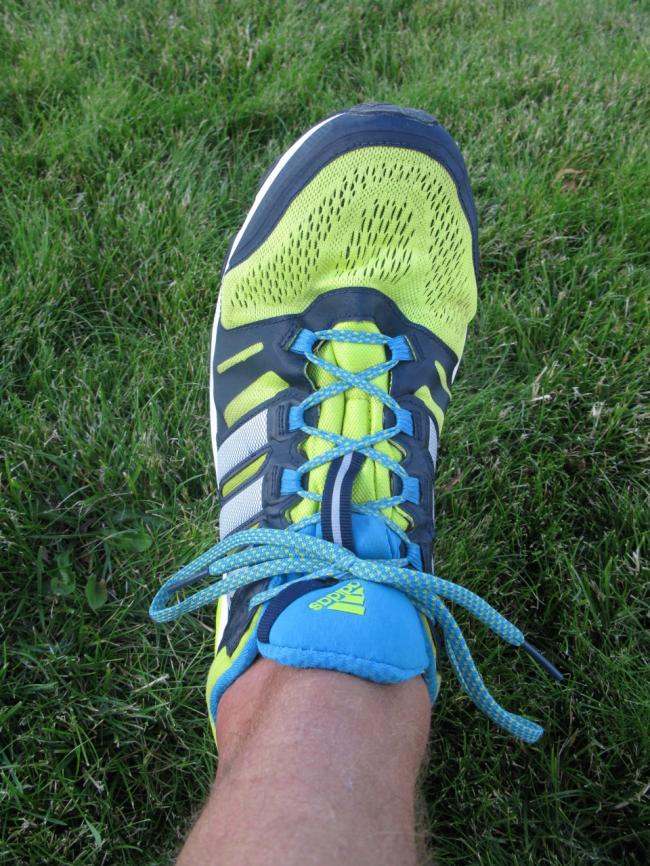 Riot 6 on foot. Felt similar to adidas Glide 7 fit and design (although Glides are more seamless), but some added trail features 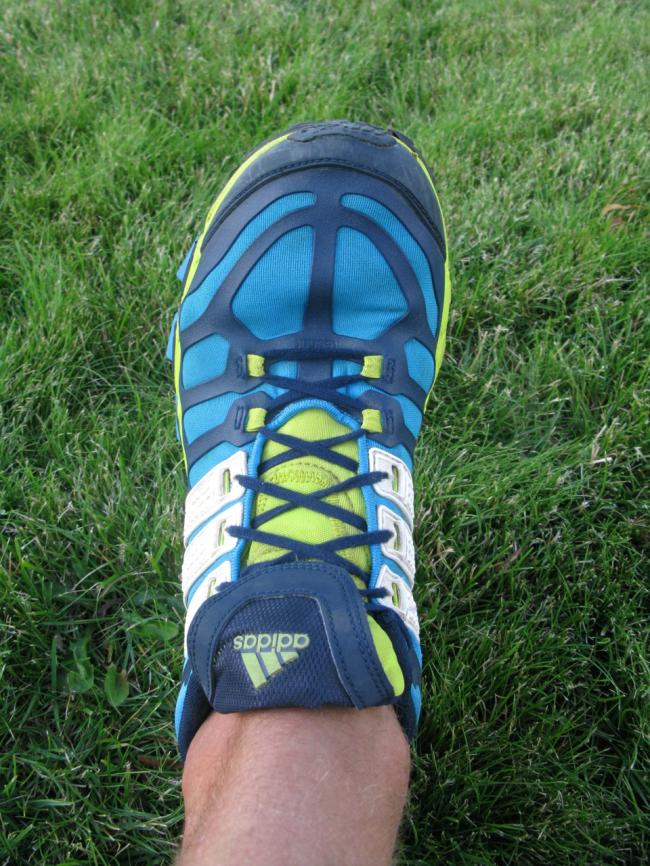 Raven 3 on foot. Fit is much lower volume and I did remove the speed laces after they performed poorly at holding my foot in place on steep downhills. Fit is similar to Nike Kiger 2 in many ways, with lower volume toebox and fit, but comfortable overall and slightly wider than Riot 6 to me.

Both shoes are, as far as I know, designed on the same last that is used in adidas’ Supernova Glide and Sequence road shoes. The fit is medium in the heel, fairly snug in the midfoot, and while medium width in forefoot compared to most shoes on the market, they are wider than adidas’ adizero road lineup that more runners are familiar with (think adios boost).

For me, the winner for fit between the two is hands-down the Raven 3. This is not to say that the Riot 6 fits terribly, but there are a few things I didn’t like.  Namely, the tongue bunches a fair bit (see pic above), and there is too much padding/quilting in general in the upper. The latter feels good at first, but it gets hot and also takes on lots of water when wet.  Additionally, there is quite a bit more stitching on the Riot, and although I’ve gotten away with a 2 hour run in them without socks, I’m not sure I’d feel comfortable going sockless for much longer than that. I like the randing and engineered mesh on the forefoot of the Riot 6, but sadly that is about it on the upper.

The Raven 3, on the other hand, is quite nice, with a soft, seamless, thin neoprene-like material that, while somewhat hotter than open mesh, still stays relatively comfortable. I ran the first 30 miles of Western States in these and didn’t have any major problems.  If I was to pick out anything, it would be that the 3 white stripes are a bit thick/stiff and could be thinner and more comfortable, but they hold the foot well. 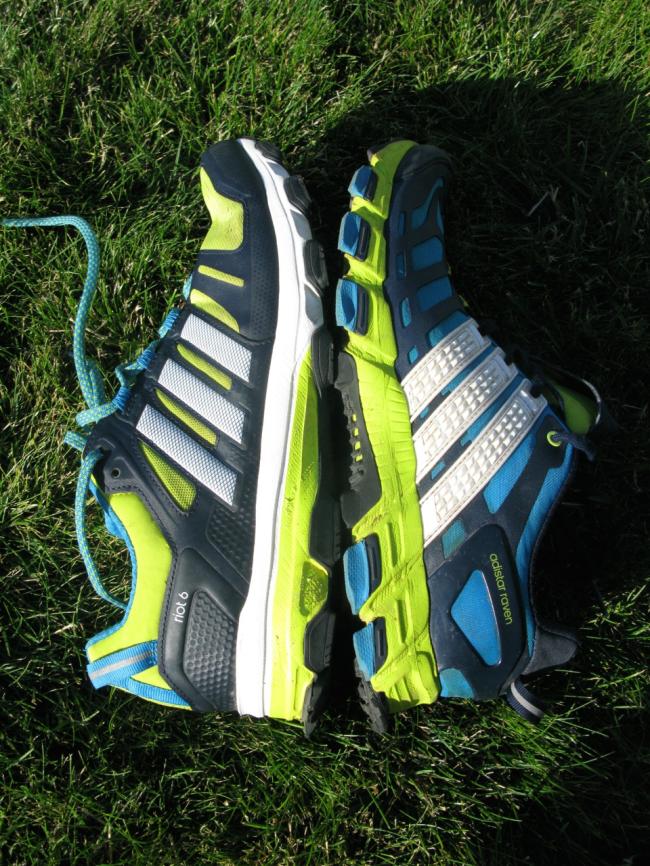 Midsole heights seem to be identical, but rides are very different.

The two shoes feel quite different on the run, despite what appear and feel like identical stack height soles. The Riot 6 is quite soft and airy feeling underfoot, which is probably the biggest reason why the weight is kept relatively low for a fairly substantial-looking shoe (i.e., it’s not a very dense midsole). It’s definitely not the signature firmer/responsive adidas ride that I was used to with their road line. I didn’t necessarily dislike the ride, but I’m not sure if it is most conducive to the type of terrain I would normally choose to use the shoe on based upon the structure of the outsole and thickness of the midsole.  That said, it performed quite well on some steep terrain, including off trail travel through a boulder field, so it wasn’t a deal breaker by any means.

The Raven 3, with a denser adiprene+ midsole, is firmer and more responsive. This denser midsole foam also provides more protection under the forefoot. The Raven 3 felt super smooth, efficient, and low for a heavier shoe, yet it’s very forgiving as well. This is the main reason I chose to wear them for the high country at Western States, and they delivered great protection without feeling like I was wearing a clunky shoe.  The Raven 3 is the winner again for me when it comes to the ride. 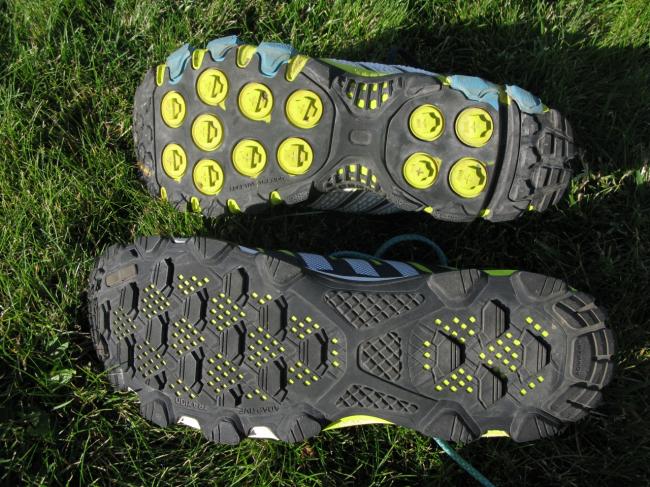 Raven 3 on top – notice round yellow lugs; these depress under pretty low pressure and are a part of adidas’ “adaptive traxion” system; more on that below. Riot 6 on bottom with a lightweight (due to the cutouts), but very sticky, all-purpose outsole; a high point of the Riot for me.

For me, the outsoles are where adidas typically shines in terms of trail shoe construction.  Their use of Continental rubber, their own Traxion, and adiwear produces outsole compounds that work really well in many conditions.  One other attribute of note concerning adidas’ outsoles is the amount of float, or sliding, that they allow dry trails while still being quite lugged.  Many lugged trail shoes don’t produce this effect and instead have a much more “sticky” feeling that really takes a lot of energy out of the legs on long, hardpack downhills.  Both the Riot 6 and Raven 3 outsoles are examples of these good qualities that are usually present in adidas’ trail outsoles (including the forthcoming Boost models).

Both models are very effective on a variety of terrains and conditions.  The main differences are that the Riot 6 has a softer rubber that is much sticker on rocks, and is actually one of the stickiest outsoles I’ve ever used, even when compared to shoes like the La Sportiva X-Country and Mutant which use approach (rock climbing) shoe rubber.  The Raven 3 outsole is not as sticky, but plenty adequate for almost any trail condition.  Its best feature is the “adaptive traxion” component, which includes the yellow circular lugs that are designed in such a way as to depress at a much lower pressure than a traditional lug.  The result is that the shoe runs really well on hard and smooth surfaces, and yet is still effective on loose terrain and off-trail. It feels stable at all times. Hard to pick a winner in this category as they are both very good outsoles with very different characteristics, but I might give a slight edge to the Riot 6 due to how fantastically sticky the rubber is while still allowing float on hardpack.

Given that the Raven 3 is being replaced by the Raven Boost (which was just released), and the Riot 6 will likely be updated in the spring, this review may come a bit late.  However, I’ve enjoyed the Raven 3 so much that I really wanted to give a nod to what I think is a really great protective, smooth riding, yet responsive shoe that is probably one of the most well-rounded trail shoes I’ve run in.

The Riot 6 has some drawbacks for me, particularly the softer/airy ride, and an upper that doesn’t fit quite right.  With regard to the Riot 6, which is available on Zappos and discounted at Leftlane Sports, I’d suggest waiting for the Boost trail models to hit the market (particularly the Response TR, which handles everything the Riot does with a more comfortable upper, deeper lugs and more responsive midsole; review coming very soon).

If the Raven 3, however, sounds like a shoe you would like, I’d suggest grabbing a pair, especially since the forthcoming Raven Boost offers a much different ride (very soft and cushioned Boost feeling, similar to the Ultra Boost; review also coming). While a good shoe in certain ways, the Boost model isn’t really a direct successor to the Raven 3; the latter handles technical/mountain terrain much better than its Boost replacement. The Raven 3 can be found still at 6pm and Nordstrom’s of all places (also available at discount in the UK at Start Fitness). Unfortunately, adidas’ distribution for its trail models through their outdoor rather than running channel is a big hurdle to actual runners getting their hands on these.  Still scratching my head on this and hope to have some more info on adidas outdoor distribution by the time I review the Boost models.

Disclaimer: The adidas Supernova Riot 6 was made available free of charge by the manufacturer, while the adidas Adistar Raven 3 was purchased personally by the author.  All opinions, as always, are of the author.