Altra The One2 (Squared) Review: A Complete Redesign 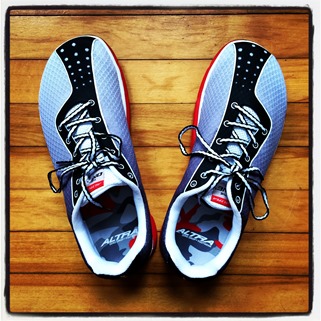 It’s been quite a while since I’ve run in an Altra shoe. I like the brand, I’ve been in touch with the founders since before they made their first shoe, and I love the fact that they produce shoes that are shaped like a human foot. However, I’ve never really connected with an Altra shoe to the point where it’s the one I want to pull out when I go for a run.

My problem with Altra in the past is that most of the shoes I’ve tried were too firm and too stiff. The original Instinct and it’s sequel (Instinct 1.5) were good examples – I enjoyed both shoes for casual wear, but the full coverage rubber outsole, firm midsole, and lack of flex grooves made the sole feel like a slab under my foot. I felt similarly about the Torin even though it was softer, and never ran much in it. Of all of the Altra shoes I’ve tried, I got along best with the Superior, mainly because it flexed better than most of the others.

Altra has stirred up a bit of controversy in recent months with a move toward more cushioning in their footwear. They beefed up and softened the Instinct in version 2.0 (have not run in them, but saw a pair last week and they are very soft), they introduced the maximally cushioned Altra Olympus trail shoe, and are soon to release the maximal Altra Paradigm road shoe. Shoes like the ultraminimal Samson and Adam are no longer in production. In perhaps the biggest change, the Altra The One has been totally redesigned from a low-profile, racing flat-style shoe to a Saucony Virrata/Kinvara-style lightweight trainer.

I’ve seen a lot of commentary from Altra fans complaining about the move to greater cushioning. I’ve seen others excited about the change. Personally, I’d like to see both ends of the spectrum stay in play, but I also understand that the economics of the footwear business mean that tough decisions have to be made. Shoes that aren’t selling either need to be dropped or redesigned, and this is particularly true for a small company like Altra. The founders of Altra believe in minimal footwear (though they are quick to say they are not a minimal company, and I agree), and if a market exists for such shoes they will be players (I’ve even heard they may have a new minimal shoe in the works). Altra’s philosophy is that if people want cushioned shoes, let’s at least give them the option of zero drop and a wide toebox – these are the features that Altra has stayed true to from the very beginning.

I purchased a pair of the original Altra The One a few months ago (they were on sale at Amazon), but never wound up running in them. The fit was a bit off, and I’d heard reports about them turning people’s socks and feet green. I wound up selling them on Ebay since I’d heard rumors they were going to be replaced and putting time into a review thus made little sense. 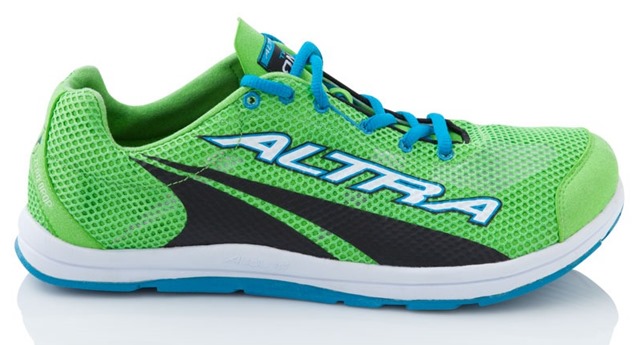 The original Altra The One

Two weeks ago I got an email from Golden Harper, one of the founders of Altra, asking if I had any interest in trying out a near-production sample of the Altra The One2 (the shoe comes out in May). I’d seen images of the shoe, and it was clear that it was going to be very different from the original. I agreed, and he sent me a pair – they arrived at my doorstep last week. My understanding is that the pair I have is not a production pair – some modifications will be made to the upper, which I’ll try to explain below.

My first impression of the shoe upon taking them out of the box was very positive. Altra has come a long way in terms of aesthetics, though based on photos I’ve posted on Instagram and Facebook the response to the One2 seems to be either A) beautiful! or B) they look like bowling shoes. I fall on the side of thinking that they look great. 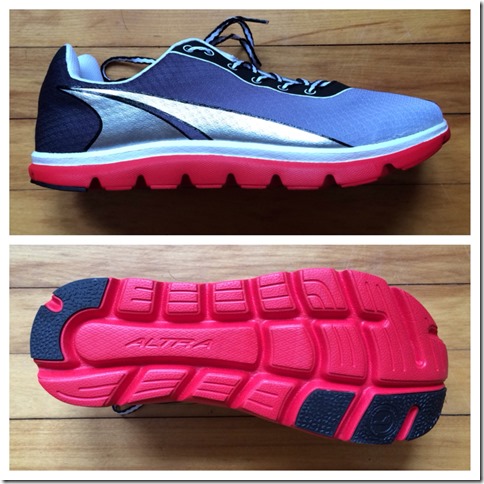 As mentioned, the pair sent to me is slightly different than the production pair. Running Warehouse recently published a blog post about the One2, and in it they have photos of what I assume will be the shoe with the production upper: 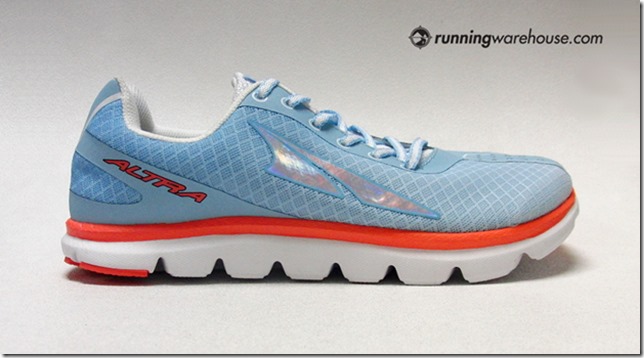 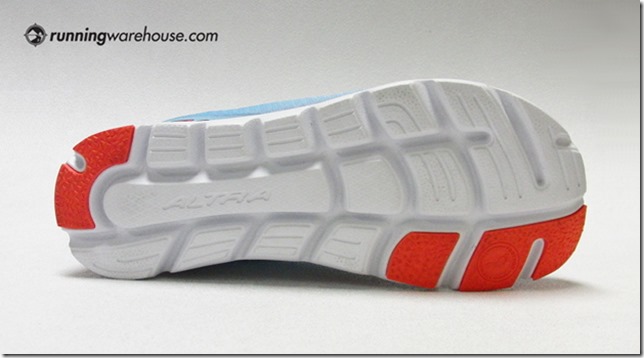 The main differences from my pair seem to be the smaller Altra logo, and the addition of an overlay around the back of the heel. The sole appears to be identical to the shoe I have, so the difference is apparently mostly cosmetic.

I’ve now run in the One2 three times for a total of 21 miles – a 5 miler, a 6 miler and a 10 miler, all on asphalt. The 10 mile run was my longest since last summer, so a good test for me. Based on these runs, I’d say this is probably the first Altra shoe I’ve worn that I’d be comfortable wearing for a marathon. Very impressed.

Let’s dig into the details.

I’m going to assume based on what Golden told me that the upper will be structurally similar in the production model (seems to be the case based on the above images). It’s a minimal upper, very few overlays, and relatively thin in construction. The material is very soft and pliable, not that plasticy material that a lot of brands are using these days (and that seems to often tear at flex points near the forefoot).

The One2 has a very thin heel counter – it’s not hard plastic, but there’s just enough there to give the back of the shoe some structure. This is definitely one that I’ll be adding to my list of shoes to recommend to people with pump-bumps (Haglund’s deformity).

The internal lining of the upper is very soft, almost sock-like. There is a thin insole with just the slightest hint of arch support. The upper overall is extremely comfortable.

When I first put the One2’s on my feet my reaction was “Wow, this is an Altra???” They felt downright cushy compared to other Altras I’ve tried, and for me this is a good thing. The feel underfoot is very comparable to the Saucony Virrata, maybe even the original Saucony Kinvara. And the reason why this is good for me is because those two shoes have been on my feet in my last three marathons (not at the same time!). The One2 is like a Virrata with a super wide toebox and a less structured upper, and less of a lug-like feeling under the forefoot.

I was a bit worried at first that the One2 would feel mushy on the run. They don’t, they actually feel pleasantly springy, but not in a racing-flat kind of way. More like adidas Boost, Skechers Resalyte (midsole material for the GoRun), or maybe a Brooks DNA-BioMogo blend midsole. They feel softer when walking than when running. The midsole is composed of a blend of EVA and Altra A-Bound (latter is the stuff from the sole of the Altra Instinct), and I’m wondering if this combo is what gives the shoe it’s cushy yet somewhat springy feel. 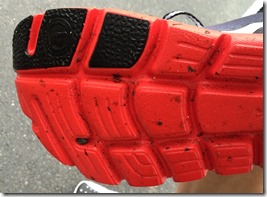 The deep flex grooves in the sole of the One2 make for an enjoyable ride for me. The shoe is both longitudinally and torsionally flexible, and gone is the slab-like feel of many of the other Altra shoes I have tried. One drawback of the flex grooves is that they will trap rocks – I’ve pulled several out of my pair, but do not notice them while running.

With the change in sole comes a change in purpose for this shoe. The original Altra The One was more a firm racing flat, whereas the One2 is more of a lightweight trainer/distance racer. This isn’t a shoe I’d choose for my next 5K, but it’s a shoe I’d definitely consider for a marathon. I did do a few sprints in them at the end of one of my runs, and they were fine, but top speed is not what this shoe is built for.

One attribute of the outsole that might concern some is the lack of rubber under the lateral forefoot. There are patches at the back of the heel and under the big toe, but forefoot strikers may wind up eating the exposed EVA up along the lateral forefoot. There’s a balance between feel and durability though, and I tend to really like running in shoes with lots of exposed midsole(e.g., Skechers). That might be why the sole of the original Kinvara was one of my all-time favorites, and Saucony told me that they were hesitant to add rubber to that area for fear of altering the ride. I’m a mild heel striker most of the time, so I can’t comment on forefoot durability, though I’m sure Thomas over at Believe in The Run will touch on this if/when he reviews this shoe (he destroyed the original Kinvara in this area).

One point of concern about the sole – I noticed this morning that the white paint along the upper portion of the sole was flaking off. Purely cosmetic, and hopefully Altra can get this under control in production: 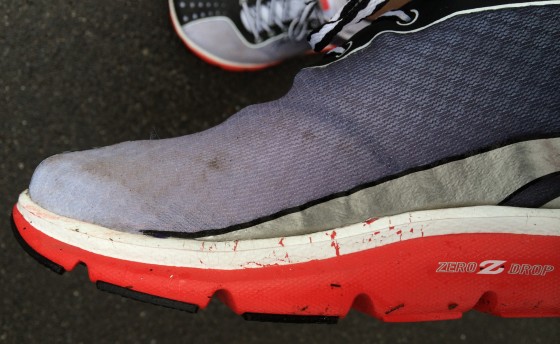 Some are going to hate what Altra has done to The One, but I for one really like the One2. It’s the first Altra shoe that I’d truly consider for a marathon distance race, and it combines softness and flexibility in a way that I have yet to see in any other Altra (I haven’t yet tried the Instinct 2.0).

I personally think Altra would have been wiser to release this shoe as a new model and retain The One as a speed shoe/racing flat – I’m not sure of the reason behind their thinking with going the update route instead (Update: just got an email from Golden Harper about this, I think the idea is that the 3-Sum will continue to be the racing flat and will become less a Tri-specific shoe; it is on the same sole as the original The One). It’s surely a shoe that will appeal to a broader audience than the original The One, and I think the hope is that if it and the other new shoes/updates in the Altra lineup sell well, they can start adding back in more niche shoes at the more minimal end.

I’d recommend the One2 to anyone looking for a zero drop, cushy shoe for long miles. And if you tried the Saucony Virrata and found it too narrow, the One2 with its Altra foot-shaped last might be worth a shot.

Side note – if you’re a huge fan of the older Altra shoes, lots of them are available on clearance for $50-$60 at The Clymb.

I’m curious – are you excited or upset by the direction Altra is taking with this shoe (or with the direction the brand has gone as a whole)?

You just finished reading Altra The One2 (Squared) Review: A Complete Redesign! Consider leaving a comment!