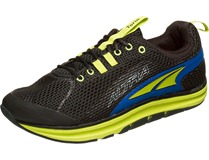 John Shepard (@runsheprun on Twitter) and I are kindred spirits in a way. We both are fathers of three kids (he writes about his on the Suburban Father Alliance blog), we both fell in love with running and footwear, and shoes have become a second career of sorts for both of us. For me it was starting this blog and writing about running shoes, for John it was selling them out of his house and car (very much like the early pioneers of Nike!).

Here’s how John describes his business, which is called Take it on the Run:

“Take it on the Run started with a love of running and an annoyance of not being able to find great shoes in my home town. Sure I could go to the local stores, get any major running brand I wanted, have someone fit me improperly, and leave with lighter pockets. But I didn’t want that. I wanted to try different brands that weren’t so readily available in my area.

So if you have come here looking for the latest and greatest from the big running giants, sorry. I can’t help you. If you did come here because you believe in the brands I sell, lets make a deal…”

John is a big fan of the startup shoe company Altra, and as a vendor he gets advance pairs to try out prior to deciding on whether to sell the shoes. He indicated to me in December that he had a pair of the new Altra Torins, and I asked if he’d be willing to write a review for me. That review follows:

As a disclaimer for this review, I own a running “store” that sells Altras. However, I will not let that skew my review of the Torin. I run primarily in the Altra Instinct 1.5s & Altra Superiors.

In the last year and a half, I had the good fortune to run in just about every type of Altra shoe that they made. Altra came on the scene almost 2 years ago with the simple Instinct and have built a pretty significant following in that short period of time. They have since released about 6 other models, with a couple more coming out in the Spring of 2013. Exciting stuff!

The Altra Torin is a newly released model that is described as follows in the Altra Catalog:

“Now, you never have to give up cushion for good form. Altra Footwear added more cushioning to the Zero Drop™, foot-shaped shoe. With a 15 mm, 2-layer A-Bound™ midsole, The Torin™ shoe provides maximum foot relaxation, stabilization and power. Run in it, work out in it – you’ll feel the difference.”

Below is the catalog page for the Torin: 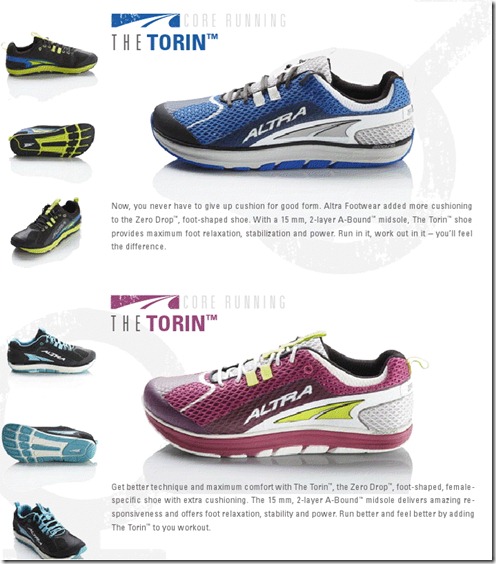 When they arrived in the mail I was pretty impressed with the construction of the shoe. I was glad to see that the upper was NOT of the same style as that on the Instinct 1.5’s – it was just 1 layer of mesh like previous Altra models (a few customers and myself have experienced ripping of the upper in the 1.5’s). However, what sets these shoes apart from all previous models is the sole. It measures at 28mm (total stack height) and the midsole is made from their A-Bound™ EVA material. It’s thick when compared with their other models (Instinct = 22mm stack, Sampson/Adam = 10mm stack). I could not find the specs on the outsole – it seems to be a bit thicker than the Instinct 1.5 outsole, but is made of the same blown rubber compound. Although the overall thickness of the sole is a major departure from other models, Altra did a really good job maintaining a foot shaped design with the characteristic enormous Altra toe-box that everyone loves.

Now that I’ve obliged with the technical specs, I’ll get into the feel of the shoe and how it performed. As mentioned above, the toe-box is spacious and may even be just a smidge larger than that of the 1.5’s. The shoes are a bit stiff compared to other models. This is to be expected with the extra layers of cushion they’ve added. As such, they feel like more of a stability shoe, but with a wee bit of squish on the inside. Not enough to make them feel too soft, but enough to provide a substantial difference from other models. If you are a proponent of so called “ground feel,” the Torin probably isn’t the shoe for you. 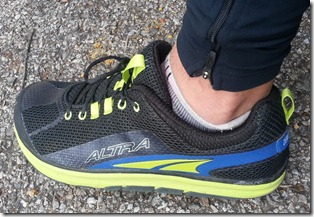 There was one issue that I noticed right off the bat with these shoes: the lacing.  I feel like an eyelet was missed towards the top of the shoe. One of Altra’s selling points for previous models was their “Heel Claw,” but that seems to have been omitted from these. As a result, during my first run in them with standard lacing techniques I experienced a lot of heel slippage. I have since re-laced the shoes to provide more grip up around the ankle, but as mentioned, I’d really like to see another eyelet up top to help with this. I feel with the way they are now, the knot goes across more of the top of my foot than I’d prefer.

My second run in the Torins was on a pretty technical trail on the outskirts of St. Louis. The trail hits just about every type of terrain that you can imagine (single track, soft river beds, through a field, and up some pretty crazy Billy Goat terrain). All in all about 7 miles. The shoes did well for most of the run, but I did have to stop and re-jigger the lacing 3 or 4 times (I can chalk that up to me trying out a new lacing pattern). Towards the end of the run, I did roll my ankle in the shoes twice. I think this could be equal parts user-error and shoe-error. I’m not used to being this high off the ground so it’s very easy to conclude that I just wasn’t used to the height. However I did notice that while Altra went up with the shoe, they didn’t go out at the bottom. I think a bit of a wider base may help to prevent this.

My final run (and this could have been a dumb mistake) was a 16 miler, mostly on pavement. This distance is farther than I have ever gone before. With my previous long runs I’ve noticed that foot fatigue has given me the most trouble, but I didn’t experience as much fatigue with these shoes. I had no hot spots, no weird rubbing, or blisters. They performed exceptionally on this run. 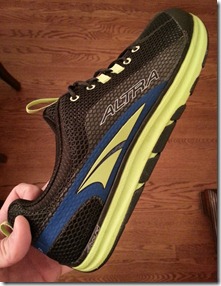 · Worked well on pavement both long and short

· Take it easy on technical trails

· Altra continues to do better with their design

· Lacing was an issue for me

· Would prefer a bit wider base

To learn more about John’s approach to selling shoes, or to buy a pair from him, visit Take it on the Run (disclosure: I do not have an affiliate relationship with John, just helping out a friend and fellow shoe junkie!).