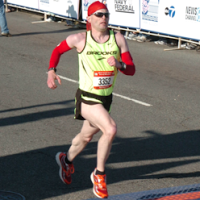 One of the great things about the sport of running is that I get to repeatedly witness good people accomplish truly amazing things. I’ve written a lot on this blog about the power of the internet to bring like-minded people together, and so it was last year that I met a guy named Andy O’Brien on the social training site dailymile. Andy O., along with a small group of other fellow runners (you all know who you are!), was an early adopter on dailymile, and we have since become members of the dailymile Team. Andy stands out due to his wry, self-deprecating sense of humor, his colorful clothes and trademark du-rag, and his love of good beer. It’s easy to tell that he has fun when he runs, and it rubs off on the rest of us. He’s also pretty handy with Photoshop, much to my frequent dismay.

Anyway, Andy decided earlier this year to train for and run the Burning River 100 Mile Ultramarathon in NE Ohio. His initial intention was to do a 50 miler, but unable to find one in the right place at the right time, he opted to make the big jump to the 100 (his previous long race was the 50K HAT run earlier this year). Andy managed to put in his miles early in the morning and late at night while juggling the demands of job and family, and yesterday he toed the starting line at the BR100. I woke up this morning to find a tweet from my buddy Steve Speirs saying that Andy had finished the BR100 in a time of 26:36:05. I am awed and inspired, and wanted to take a moment to congratulate Andy on this amazing accomplishment. Andy, you’ve most certainly earned a beer – enjoy it! 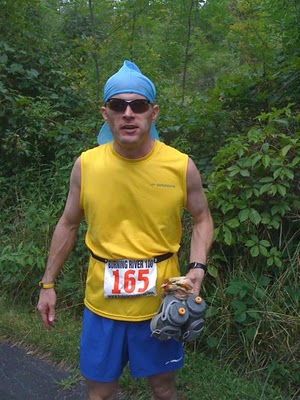 Andy at Mile 33 of the Burning River 100. Photo courtesy of Gordon H. (aka @disneyrunner). 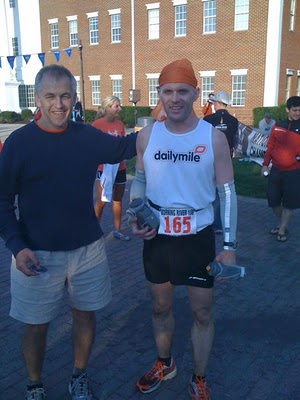 Andy at the Finish of the Burning River 100. Photo courtesy of Gordon H. (aka @disneyrunner). 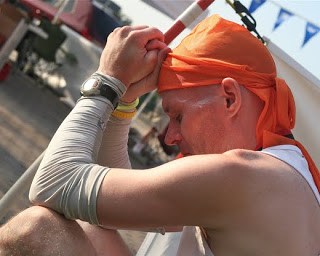 Pure emotion at the finish. Photo from Jenny J. on dailymile.

Keep an eye out on Andy’s dailymile feed for reports on his experience at the BR100: http://www.dailymile.com/people/everyruncounts

Look for a race report on Andy’s blog: http://blog.andyobrien.com/