An Update On My Wife and Her Hoka Bondi 2’s 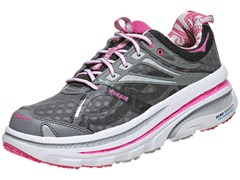 About two months ago I wrote a post about my wife Erin’s long term problems with foot and hip pain. She had gotten her hip pain under control through a post-run strengthening routine (lunges), but earlier this year she was diagnosed with a neuroma in her right foot, and was unable to run without pain in any of the shoes that she had at the time. She was ready to give up running altogether.

After describing her situation to him, my buddy Nate recommended that she try out a pair of Hokas – they helped him through a bout of plantar fasciitis last year and he’d heard of others who’d had success using them to battle foot pain. I hopped on-line and bought her a pair of Hoka Bondi 2 shoes. She wasn’t crazy about the platform-shoe appearance, but she was game to give them a try.

I’m happy to report that my wife has experienced zero foot pain since she started running in the Hokas. That’s almost two months of pain-free running, and this past week she managed three pain-free 4-mile runs for the first time in as long as I can remember!

A couple of days ago Erin proposed that we run the Four on the Forth race together in Bridgton, ME on July 4. The Four on the Fourth is the first race I ever ran back in 2007, and she had agreed to run it with me as a way to motivate me to start exercising again (I was pushing 190 pounds at the time, and was horribly out of shape). Erin does not like to race (at all!), so this proposal nearly knocked me off my feet.

To say that I’m happy about Erin’s progress would be an understatement – a simple change in shoes has given her back an incredibly important part of her life.

You just finished reading An Update On My Wife and Her Hoka Bondi 2’s! Consider leaving a comment!