Another Example of a Garmin Forerunner 620 Tracking Problem

Several months ago I wrote a post in which I discussed GPS accuracy issues I’ve experienced with my Garmin Forerunner 620. Though on the whole I like the watch, I still experience episodes where it seems to flip out and lose track of real-time pace and/or the correct track. This often manifests as the watch reporting a pace much slower than I actually am running for a period of time, after which it speeds up the pace to faster than I am running, seemingly in an effort to catch back up and even things out. I also still experience episodes where the watch records a track that would involve me running through backyards and houses.

Yesterday I was looking at the data from a five mile run I had done on Saturday, and I noticed something unusual in the pace track. About 3/4 of the way into the run the pace reported slowed to about 10:30 min/mile for a bit, then sped up after to a low 7:00 pace (you can see this in the image below via Garmin Connect). I wasn’t watching the Garmin at the time, but I know that I did not slow my pace down that much at any point in the run, so this seems to be one of those instances where the watch flipped out and tried to catch back up. 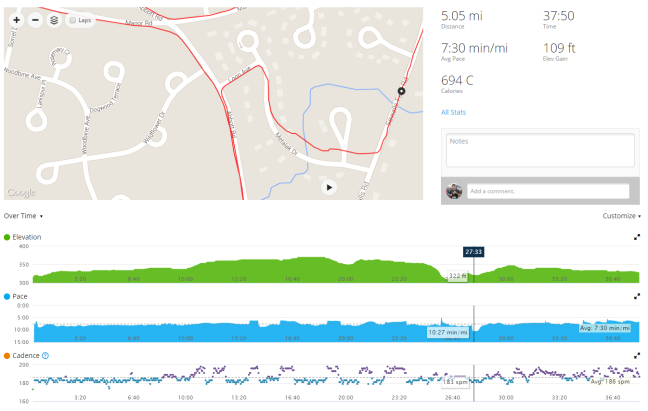 What’s interesting, and the reason why I’m writing this post, is that shortly after the pace anomaly the GPS track went off course. You can see this in the map above where the track does not follow Metalak Drive (you can see it pass right through a house!). It then regains the proper track on Loon Ave. The period of wayward tracking seems to correspond exactly to when the watch sped up the pace to compensate for the slow-down anomaly.

I’ve had a draft of a Garmin 620 review sitting in my queue for awhile, but have held off since I’ve wanted to see if maybe a firmware update would resolve these issues. Unfortunately, they still happen often enough that I worry about recommending the watch to others. Curious if anyone else has noticed the loss of tracking accuracy following a real-time pace flip out?

You just finished reading Another Example of a Garmin Forerunner 620 Tracking Problem! Consider leaving a comment!