Application of the “Wet Test” and Static Arch Height for Assigning Running Shoes: Nails in the Coffin

If you wear running shoes, it’s fairly likely that you are familiar with the so-called “wet-test.” The basic procedure is that if you wet the sole of your bare foot and stand on an absorbent surface like dry concrete or a paper bag, the imprint of your foot will reveal something about your arch height (my wet-test result from last summer is shown in the image to the left).

Typically, the results of the wet test are interpreted as follows. If no distinct arch is visible, you have flat feet, probably overpronate, and thus need motion control. If there is a distinct dry area under the inner side of the arch region of your foot with a complete wet band adjacent to it on the outer side, you have normal arches, normal pronation, and would do fine with a mild stability or perhaps a neutral shoe. If the outer wet band is separated in the middle by a dry area, or if the wet band is very narrow, you have high arches, underpronate, and need a neutral cushioned shoe. This 2004 article from Runner’s World website provides a typical example (with diagrams) of how to interpret your “wet test” results.

Unfortunately, there’s a big, big problem with the wet test, and it’s due to the fact that the test is done when you are standing still. This is what’s known as a static measure of arch height/deformation/collapse, meaning we take it while we are not moving. Though we all might feel like we are standing still sometimes when we run, I can assure you that running involves movement of your legs and feet, and we don’t need a scientific study to prove that! When we run, forces generated are very different than when standing still, and the arch of the foot behaves differently. Why? Because the arch is not simply a passive structure. There are muscles that help to support the arch, such as the tibialis posterior and the flexor hallucis brevis, and it’s quite likely that they are going to be more active when you are running than when you are standing still. 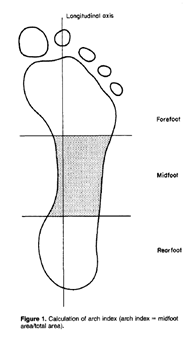 Several scientific studies have shown that static measures of arch height yield significantly different results than those measured while walking or running (dynamic activities). In a study published in Clinical Biomechanics in 1989, Dr. Joseph Hamill and colleagues from the University of Massachusetts compared static and dynamic (walking) footprints using a measure called arch index. To determine arch index, they applied ink to the feet of their subjects, had them walk over sheets of paper, and compared the size of the ink imprint in the region of the midfoot relative to the overall area of the foot imprint (excluding the toes – the shaded region in the picture at left shows the midfoot area compared by Hamill et al., 1989).

Hamill and colleagues found that arch index (size of the shaded area) increased in seven subjects, decreased in 15 subjects, and did not change in two when they compared the walking footprints to the standing footprints. Though static and dynamic measures were strongly correlated in this case, they were found to be significantly different, with the arch tending to be higher when walking than when standing. They suggest that differing orientations of the lower leg, increased weight bearing, or increased activity of foot musculature could explain the differences observed. They also found little correlation between observed arch index and other dynamic aspects of gait, writing that “the lack of significant findings between the dynamic aspects of gait and arch index may discount the use of this measure in functional lower extremity evaluation.” Furthermore, they write that “Although a large contact area may be present, very little force may be exerted over much of the contact area. A person who has a very large arch index may actually demonstrate a pressure distribution pattern more closely resembling a person with a very high arched foot (small arch index).” Finally, the authors do indicate that “first ray mobility was particularly effective in predicting dynamic function, supporting its continued use as a measurement in lower extremity evaluation.” So, the take home message seems to be that footprint type isn’t all that useful when it comes to predicting walking gait, but mobility of the first metatarsal and big toe are very important.

Jay Dicharry and colleagues from the University of Virginia published a paper in 2009 in the Journal of Orthopaedic and Sports Physical Therapy in which they did a bit more elaborate assessment of static arch deformation vs. dynamic  arch deformation during walking and running. They did this by comparing values obtained from a static functional navicular drop test (see image below for navicular location), a static subtalar navicular drop test, and measures obtained by 3-D video analysis of arch height during gait (using markers placed on the foot).

Results of Dicharry’s study (see below) showed that despite significant differences in arch collapse between the groups during static testing, arch collapse was identical in all three groups during walking, and the only difference observed during running was a small but significant difference between the hypermobile and hypomobile groups, neither of which were significantly different from people categorized as neutral (i.e., only the extremes were different, and the magnitude of the difference was far smaller than would be found using the static measures). Furthermore, despite increase in force magnitude during running, only the hypermobile group exhibited greater arch compression during running as compared to walking. They suggest that neuromuscular control during dynamic movement could explain these differences – basically, the brain activates appropriate musculature in the foot and legs to manage the forces and maintain the arch during walking and running, and this is not captured by measuring the arch when we stand still. The basic message is that even if you have flat feet and your arches collapse when you stand still, your arch may behave very much like the foot of a normal arched person when you are walking or running, likely due to muscular control.

This brings us to paper number three, which was just published on-line in Gait & Posture. The authors, led by Jesper Bencke from Copenhagen University Hospital in Denmark, compared measures of static navicular drop to both 2-D and 3-D measures of arch deformation during walking. They found only a moderate correlation between static measures of the arch and those obtained during walking (r2 = 0.31 for you stats oriented folks), and conclude the following:

“Assuming the foot as a two-segment structure in the sagittal plane with a hinge joint placed at the navicular bone between the forefoot and the hindfoot, the increased plantarflexor moment during push-off would correlate to an external moment attempting to dorsiflex the forefoot with respect to the hindfoot. The lack of good correlation between static and dynamic measures could thus be a result of this extra load being counteracted differently between participants. This would further imply that a static test measuring the ND (navicular drop) might only have limited validity as predictor of MLAD (medial longitudinal arch deformation) during gait.”

And these are not the only three papers that have shown this – if you’d like to read the full text of one you can take a look at Deng et al., 2010, who found no relationship between navicular drop measurements and arch deformation measured during walking.

So what does all of this mean? Basically, it tells us that what the arch looks like and how it deforms when we are standing or sitting probably doesn’t tell us much about what the arch does when we are actually moving. Thus, applying the “wet footprint” test as a basis for determining foot type, and thus as a basis for choosing a running shoe makes very little sense. If you are in a shoe store and they suggest that you try this test or if they take a look at your arch while you are stationary, be very wary of any advice that you get (this probably applies to those fancy foot scanning machines as well). As Dicharry showed, only the extreme floppy and rigid feet differed in degree of arch deformation during running, and the difference was very small and of unknown clinical significance (and neither differed from so-called “neutral” feet). What’s more, we have several studies showing that assigning shoes based upon arch height provides no benefit in terms of injury outcomes when compared to simply assigning everybody a stability shoe regardless of foot type (see here and here for examples).

All of this does not mean that some individuals with extremely rigid or mobile feet might not benefit from some tailored shoe advice, as studies do suggest that individuals with extremely flat or rigid arches do seem to suffer different types of injuries. However, it does suggest that the wet-footprint test as a general tool for assigning shoes should be put to rest. At the very least, methods that provide clinically relevant measures of arch deformation dynamically and simply and without a requirement for expensive gait analysis equipment that is rarely found in a shoe store should be investigated (e.g., the 2-D method described by Bencke et al.).

You just finished reading Application of the “Wet Test” and Static Arch Height for Assigning Running Shoes: Nails in the Coffin! Consider leaving a comment!