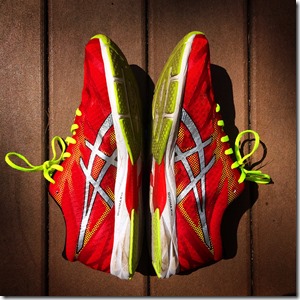 One of my favorite shoes last year was the Asics Hyper Speed 6. It was one of those shoes that matched my personal preferences almost perfectly: lightweight, softish heel, responsive forefoot, simple construction. Just a great, all-around shoe.

Based on my experience with the Hyper Speed, I decided to pick up a pair of the Asics DS Racer 10  – they were a bargain at Running Warehouse as a new color was coming out. The DS Racers sat in the box un-worn for several months, and I finally took them out back in early June (wish I’d done so sooner!). I’ve run most of my road miles since then in the Racers, and to be honest, I’m having a hard time wanting to run in anything else. Like the Hyper Speed, they feel like a shoe that was designed specifically for me.

The DS Racer weighs in at 6.3 oz in men’s size 9, so it’s a very light shoe – less than an ounce heavier than the Hyper Speed. It has stack heights of 23mm in the heel, and 15 mm in the forefoot, but it feels less than an 8mm drop shoe to me.

The upper of the DS Racer is pretty simple – a nice, breathable mesh supported by welded overlays. The mesh feels a bit less stretchy than that of the Hyperspeed, and the fit may be just a tad snugger around the foot. However, for a racing flat I find the fit of the DS Racer to be fairly accommodating and have not felt the need for extra space up in the forefoot for my toes (I have an average width foot). Fit around the midfoot and heel is nice and snug for a good lock-down.

Internally, the Racer has a weird, white fabric lining the arch area that looks like it was perforated multiple times with a hole puncher. It feels a little scratchy, and this would be one of my few complaints about the shoe – probably not the best choice for sockless running. 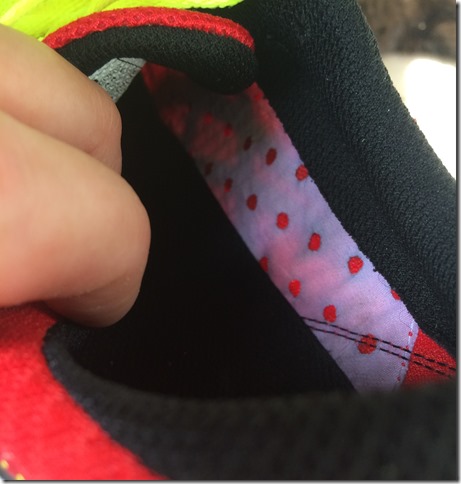 The heel region of the DS Racer is supported by a plastic heel counter, and the ankle collar is sufficiently padded to ensure a comfortable fit. No abrasion or hot spots from either.

The DS Racer is billed as a light stability shoe, having both a medial post and a plastic midfoot shank, but I can’t say that the shoe feels particularly controlling in any way (similar to how I feel about the New Balance 1500 and Saucony Fastwitch). To be honest, it runs a lot like the neutral Hyper Speed.

The feel underfoot is soft in the heel, firm in the forefoot, which is the magical combo for me – I’ve absolutely loved running in this shoe. I’d compare the ride of the DS Racer to that of the Hyper Speed, adidas Adios Boost, Saucony Kinvara, and New Balance 1400. If you know anything about my shoe preferences, that’s pretty impressive company. The thing I like about this group of shoes is that they are all very versatile – enough cushion for long miles, but lightweight and responsive under the forefoot enough for running fast. If I had to narrow down my shoe collection to just one shoe, I’d probably choose from among these (with the Skechers GoRun 4 and New Balance Zante being other contenders). 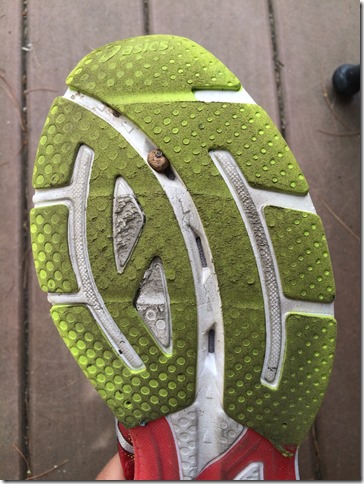 The outsole of the DS Racer is made up of heel components and forefoot components. The heel outsole is AHAR+ high-abrasion rubber and has been holding up well – no excessive wear apparent. The forefoot is composed of a softer rubber, and there is pretty significant wear present on the central forefoot after about 40 miles of running. I don’t think this will negatively impact the function of the shoe, but it would be interesting to see what they look like after a few hundred miles (can anyone comment?).

One other minor complaint is that the drain holes in the sole tend to pick up road debris – I’ve had to pluck out a few rocks mid-run, and you can see one of them plugged up in the photo above. I know some people fill holes like this with shoe goo, so I suppose that would be a simple fix. I have not run in wet conditions in these so can’t comment on water drainage/entry via the holes.

The Asics DS Racer 10 is easily among the top shoes I have run in so far this year. It’s not a newly released shoe, but it’s one that I wish I had tried sooner. If you’re looking for a lightweight racer that can also handle longer runs, it’s definitely worth a look. Great shoe!