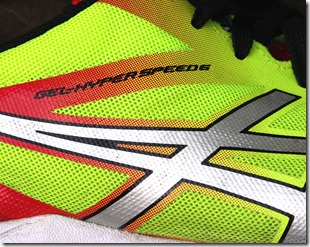 Two of my favorite shoes last year were the New Balance 1400v2 and the adidas Adios Boost. I would classify both of those shoes as distance racers – shoes that would be well suited for racing a half marathon, and maybe even a full marathon. They were a bit more cushioned than I typically like for a 5K, with both having a relatively soft heel and a firm, responsive forefoot. Both were right in my wheelhouse as far as my personal preferences go.

I have not run in very many Asics shoes in the past. I reviewed the Gel Lyte33v2 last year, and will have a review of the v3 up soon. But the one Asics shoe that I’ve long had my eye on is the Hyper Speed (Ryan Hall’s marathon racing shoe). I had thought that the Hyper Speed was going away after v5, but in talking with Asics found out that a v6 was indeed on the way. I bought a pair earlier this year (Disclosure: this was a personal purchase, not a media sample), and have now put about 50 miles on them. I’m rather impressed by the shoe, and would rank it right upper there with the NB 1400v2 and Adios Boost mentioned in the intro.

Readers of this blog will know that I’m a fan of simple shoes. I like a basic, minimally structured upper with a bit of give/stretch, and a simple sole without a lot of tech built in. The Asics Hyper Speed 6 fits this bill perfectly. Let’s start with the specs.

The upper of the Hyper Speed 6 is a double-layed mesh with welded overlays. Very simple, not a lot of extraneous material. The internal lining is soft and seamless through the midfoot region. There is some stitching on either side of the forefoot that can be felt internally, but I have not had any abrasion issues (have not tried running sockless in them yet, but don’t think it would be a problem). The upper has almost a baggy feel to it in the forefoot, which makes for a very roomy fit for a racing shoe. This fit is kind of reminiscent of the Saucony Grid Type A5, which is a very good thing for me!

The HyperSpeed 6 does have a bit of arch support, mostly due to the midsole curling up a bit under the arch, and a hard heel counter (the area colored red behind the heel is hard plastic internally).

The photo below gives a nice view of the upper mesh: 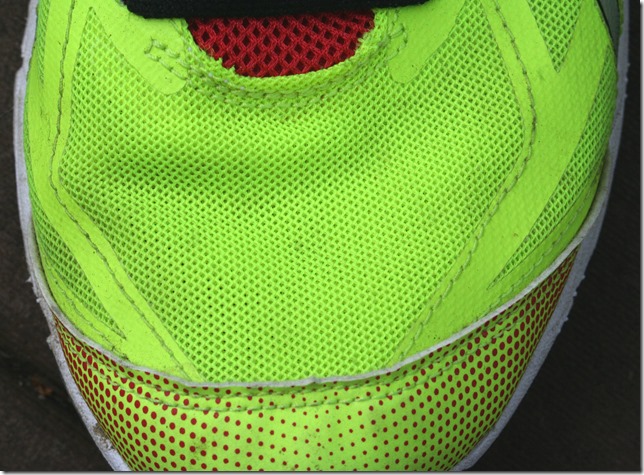 For a 5.6 oz shoe the Asics Hyper Speed 6 offers a surprising amount of cushion. The heel has a soft, springy feel to it (there is a Gel unit in the heel), very similar to the NB 1400v2 or the adidas Adios Boost. The forefoot is firm and responsive. This is my pretty much exactly what I want in a sole for my stride.

Unlike some racing flats, the Hyper Speed 6 is actually quite flexible, I don’t think there is a plate or shank of any type in the sole. This is one of the reasons why I’d not choose it as a 5K shoe – I like a shoe to be firmer and stiffer for running top speed in a short race. But for a half to full marathon it’s just about perfect. I’ve run up to 14 miles in them so far without any issue, though they do feel better at a slightly faster than easy pace. 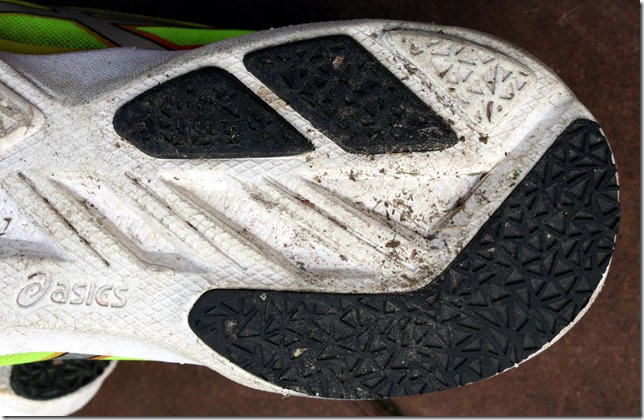 One of the things that has puzzled me about the Hyper Speed so far is that I’m seeing almost no heel wear at all (see photo above). I typically wear soles a bit in front of the back corner of the heel, and I see almost nothing there in this shoe. I am seeing a bit of wear on the triangular black outsole pod behind the forefoot on the right shoe, but that’s about it: 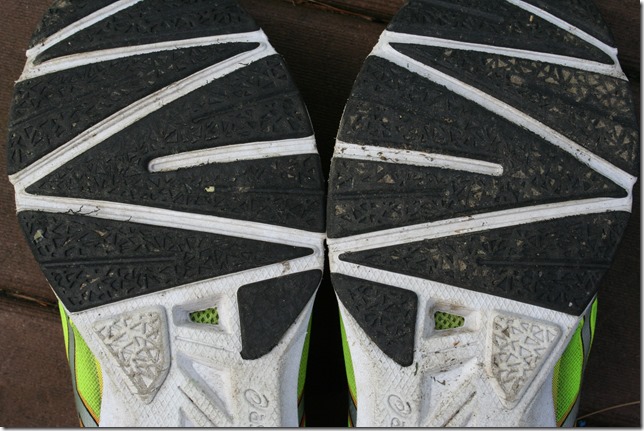 This wear pattern is unusual for me and I’ve only recently seen something similar in the Nike Free 4.0 Flyknit. I’m wondering if the flexible sole in both of these shoes is shifting my contact point forward a bit? Kind of a mystery. 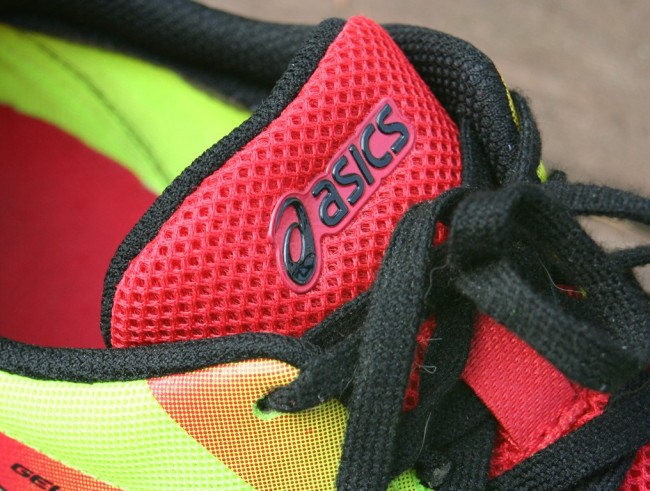 I’ve been really impressed by the Asics Hyper Speed 6 so far. It’s a sub 6oz shoe that retains ample cushion and does this in a flexible package with a roomy fit in the forefoot. Pretty much the exact combination of features I look for in a distance racer.

Here’s the best part – the Hyper Speed 6 is a bargain! It has an MSRP of $85, but can be purchased for less than that at various on-line outlets. You could likely buy two pairs of Hyper Speeds (and a couple pairs of socks) for the cost of one adidas Adios Boost. And given my observations on durability of the sole so far (50 miles on them) I’m not worried that they sacrificed quality at the lower cost.

I loved the adios Boost, but I’d find it very hard to recommend it at $140. Even the New Balance 1400v2 has an MSRP $15 higher than the Hyper Speed. If you liked either of those shoes, the Hyper Speed 6 is definitely worth a look. And if you’re looking for a first racing flat that won’t break the bank, this shoe is definitely one to consider.