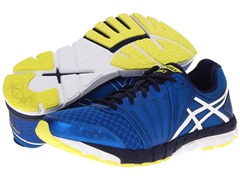 It’s been a long time since I’ve worn an Asics shoe. Back when I first started running I had a pair of the 2100 series that I liked, but since moving to more minimal footwear Asics has simply not had a lot to offer a runner with my preferences aside from a few racing flats (e.g., Hyperspeed, Piranha).

A bit over a year ago Asics introduced its “33” series, presumably to compete with the lightweight, stripped down offerings from competitors like Brooks (PureProject) and Saucony (Kinvara/Mirage/Cortana). Most of the shoes in the 33 series represented a fairly mild departure from more traditional running shoes, and only one caught my eye as something that might appeal to me as a minimally-oriented runner – the Gel Lyte 33.

Over the past year I’ve heard good things about the original Asics Gel Lyte33. In his 2012 Shoe Award post, John Schrup over at Rogue Rundown labeled it as the “Best Shoe That’s Aaaalllmost there…”, but he complained about the upper and narrow fit. I respect John’s opinion on shoes since we seem to have similar taste, so I took a pass on the original Lyte33. In his review of the original, John commented that the upper and fit were supposedly being addressed in version 2, so when I was offered the opportunity to test them out I agreed (Disclosure: the shoes reviewed here are media samples provided free-of-charge by the manufacturer). Turns out the new version is a complete makeover, and you can find a rundown on the updates from the folks at Rogue as well.

I’ve now put over 40 miles on the Gel Lyte 33 v2’s, including multiple double-digit long runs (max of 16 miles in one run), and I have to say that I really like the shoe.

Based on my preferences, I would classify the Lyte33 as an easy run/long distance shoe. It’s lightweight but not skimpy (mine weight 9 oz in a size 10.5), it’s well cushioned (Running Warehouse reports stack height at 24mm heel, 17mm forefoot), and it fits very comfortably on my feet. In fact, “comfortable” is probably the best single word I could use to describe the shoe – this is not a shoe that I think of as being “fast” or “responsive.” It’s not a shoe I would wear for my next 5k, or even in a half marathon. It’s a shoe for wearing when you want a soft, plush feeling underfoot.

The upper of the Lyte33 v2 is pretty substantial. It’s not really so much that it’s overstructured because it’s not, it just seems like they have used a lot of material to construct it. Asics could probably cut a bit of weight from the shoe by simplifying the upper a bit and removing some of the excess material. The interior feels very soft against a bare foot, and I haven’t had any hotspots or abrasion while running in them (this is pretty rare for me!). I also very much like the fact that there is no rigid heel counter, and the cushion around the ankle collar feels great. Arch support in the shoe is not extensive – it comes mostly from the contour of the sockliner, and when you take that out the arch actually feels pretty flat.

The sole of the Lyte33 is very well cushioned, and it has a softness reminiscent of the Brooks Launch, Saucony Virrata, or Skechers GoRun 2. This is not a firm shoe, and thus works very well for me for long distances (I like a soft shoe for easy runs and distance). Forefoot cushioning is excellent, which is also a plus. The outsole appears to be durable carbon rubber on the heel, and a softer rubber under the forefoot. This makes the sole slightly more noticeable underfoot at initial ground contact, especially when compared to a shoe that has a sole mostly composed of exposed EVA. The tradeoff is that I expect durability should be better in the Lyte33 compared to a shoe like the Saucony Virrata.

One of the technologies that Asics is promoting in some of their new shoes is called FluidAxis. It is intended to allow the sole to flex in the direction of sub-talar joint movement rather than simply longitudinally. You can see the flex grooves in the heel the cross diagonally over the sole – that’s the FluidAxis. The shoe does not flex particularly easily along these groves when manipulating it by hand – I don’t think they’re deep enough to be really effective. I also am not a great subject to test this aspect of the shoe since I’m not a hard heel striker. I tend to contact slightly to the heel side of midfoot, but having run on a force treadmill my pressure profile more closely matches that of a midfoot strike. As such, my stride wouldn’t make much use of the flex grooves back in the heel.

One final comment about fit – I had heard repeatedly that the original Gel Lyte33 was a pretty narrow shoe. I’m happy to report that the Lyte33 v2 is plenty roomy on my feet, I’d go so far as to call the forefoot spacious. I definitely feel like it has more room than the Saucony Kinvara or Virrata, though I would still opt for either of the latter for a marathon due to their lighter weight and the fact that I like the way a less prominent outsole works with my stride.

My personal feeling is that shoes like the Gel Lyte33 (along with the Brooks PureProject, Saucony Kivara/Mirage) should be the new center of the running shoe spectrum. It would be a great place to start as a runner since it would feel familiar and well-cushioned, but it’s a lot less shoe than more traditional models. It’s also a great choice for someone used to more traditional shoes who wants to try something less without making too big a jump to more minimal footwear. And at an MSRP of $90, it’s a reasonably price shoe on the current market.

For me, the Lyte33 works very well as an easy run/distance shoe, and for that reason it’ll likely retain a spot in my rotation.

The Asics Gel Lyte33 is available for purchase in selected colors at Running Warehouse. Outside of the US it is available at Sportsshoes.com.

It is available in a wider selection of colors at Zappos.