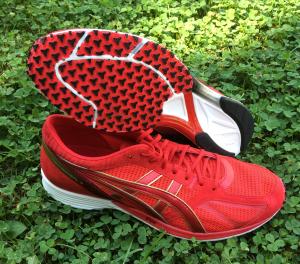 A few weeks ago I reviewed the Asics Gel Lyteracer RS 4. The Lyteracer is a Japanese racing flat that was brought to the US by Running Warehouse, and I was quite impressed by the shoe. It offered a forgiving heel, a no frills yet durable upper, and was light and responsive enough to use for racing. I’ve since used that shoe in a 10 mile race (my only race this Fall), and it did not disappoint. Great shoe all around!

In addition to the Lyteracer, Running Warehouse also sent me a pair of another Japanese racing flat: the Tartherzeal 3 (Disclosure: these were provided free of charge for review purposes). There are some similarities between the Lyteracer and Tartherzeal, but also some significant differences. I’ll dig into both in this review.

Per Running Warehouse, the Asics Tartherzeal 3 weighs in at 6.0oz in men’s size 9, and stack heights are 22mm heel, 15mm forefoot (7mm drop). As with other Japanese flats brought over by Running Warehouse, sizing is a bit odd for the Tartherzeal. There was no 10.5 avaialble, and max size is 11.5. I’ve been running in a size 11 and have found the fit to be good, if a tad on the long side (my normal size is 10, but I typically go up to 10.5 in flats).

The upper is where the Lyteracer and Tartherzeal share the most similarities. Both have a retro-looking upper composed of a traditional mesh with suede-like overlays. Both have a firm heel counter, and both have exposed stitching internally which likely precludes sockless wear (at least for me). Fit for both shoes is surprisingly roomy for a flat, though that may in part be due to the fact that I am wearing a half size bigger than my usual. The laces on the Tartherzeal are a bit thinner and flimsier, but this did not cause me any problems. If you like a simple upper, both of these shoes should appeal to you.

The sole is where the Lyteracer and Tartherzeal diverge. The Lyteracer sole is well cushioned, particularly under the heel, and it has worked well for me on runs up to 10 miles. I’d probably have no issues running a marathon in them. The Tartherzeal 3, on the other hand, has a stiff, firm sole built for speed. I’d describe it as a short-distance speed shoe – best suited for 5Ks and speed workouts, at least for me. It’s a shoe that feels great when you pick up the pace, but it’s not a forgiving shoe for long, slow distance. I’d compare it in this regard to shoes like the Adidas Takumi Sen, Mizuno Ekiden, Pearl Izumi N0, Saucony A6, and the old Adidas Hagio.

One of the most striking features of the Tartherzeal 3 is how grippy the outsole is. Unlike the almost full-coverage outsole under the forefoot of the Lyteracer, the Tartherzeal has little rubber nubs covering the forefoot. I’ve run in other shoes with this type of design, but none are quite as grippy as the Tartherzeal. You can feel how edgy the nubs are when you touch them, and they tend to catch on carpet if you walk around the house in the shoes. In his review of the shoe, Thomas Neuberger talks about how he walked over a yoga mat in the Tartherzeal and it ripped chunks out. I haven’t run on a rubberized track in these shoes, but I’d be interested to see how they feel on that surface – if you like a grippy racing shoe, this one is probably the grippiest out there.

The Asics Tartherzeal 3 isn’t the kind of shoe I’d use for all of my runs, but it’s a solid option for those days when you feel the need for speed. It has a firm, responsive sole, and a crazy grippy outsole that claws at the road. It’s also fairly roomy for a flat – fit is better on me than say the Saucony A6. I also like the retro-styling of the upper. The only real downside is the price – $125.95 is a bit on the high side for a flat.

The Asics Tartherzeal 3 is available for purchase at Running Warehouse.