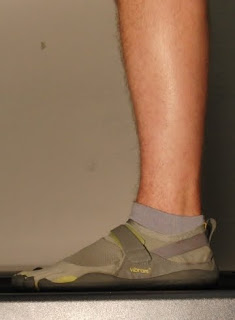 Today saw the publication of new scientific research looking at the biomechanics of running in a barefoot vs. shod condition. The article, titled “Foot strike patterns and collision forces in habitually barefoot versus shod runners,” was written by Dr. Daniel Lieberman from Harvard University and several colleagues at other institutions.  Here is the abstract of the paper published in Nature, one of the premier, peer-reviewed scientific journals in the world:

“Humans have engaged in endurance running for millions of years1, but the modern running shoe was not invented until the 1970s. For most of human evolutionary history, runners were either barefoot or wore minimal footwear such as sandals or moccasins with smaller heels and little cushioning relative to modern running shoes. We wondered how runners coped with the impact caused by the foot colliding with the ground before the invention of the modern shoe. Here we show that habitually barefoot endurance runners often land on the fore-foot (fore-foot strike) before bringing down the heel, but they sometimes land with a flat foot (mid-foot strike) or, less often, on the heel (rear-foot strike). In contrast, habitually shod runners mostly rear-foot strike, facilitated by the elevated and cushioned heel of the modern running shoe. Kinematic and kinetic analyses show that even on hard surfaces, barefoot runners who fore-foot strike generate smaller collision forces than shod rear-foot strikers. This difference results primarily from a more plantarflexed foot at landing and more ankle compliance during impact, decreasing the effective mass of the body that collides with the ground. Fore-foot- and mid-foot-strike gaits were probably more common when humans ran barefoot or in minimal shoes, and may protect the feet and lower limbs from some of the impact-related injuries now experienced by a high percentage of runners.”

And here’s a video relating to Lieberman’s research:

I’ll reserve passing any judgment on the research until I have a chance to read the actual paper and not just the abstract and associated popular media reports, but I’m excited to see high-level research like this starting to come out to support the experience of the many runners out there who have adopted a more minimalist style of running, as well as the anecdotal evidence that I have previously posted on this site regarding how footstrike changes when we run barefoot or in shoes that lack a large, cushioned heel.

If you’re interested in this Nature article, you can find it here: http://www.nature.com/nature/journal/v463/n7280/full/nature08723.html

Here is a nice write-up on the research from the Boston Globe: http://www.boston.com/news/health/blog/2010/01/oliver_ames_cro.html

And finally, here is a really nice companion site to the Nature article from Daniel Lieberman’s group at Harvard University: http://barefootrunning.fas.harvard.edu/index.html

The latter of the three links is definitely worth a thorough read – lots of good, accessible science and some very cool videos.

I’ll be sure to follow up with more thoughts when I get a chance to digest the article in its entirety.