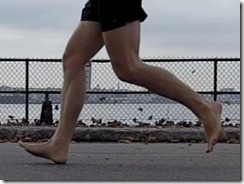 A new study on barefoot running Kenyans has made its rounds through the media over the past few weeks. I first read about it in an article on the Scientific American website. Amby Burfoot then wrote about it over on Runner’s World, and also interviewed the author of the study. Yesterday, Gretchen Reynolds of the New York Times posted an article about the study on the Well Blog. I’ve been thinking about the results of this study quite a bit, and given my interest in the subject, as well my own past research on foot strike, thought I’d post my own thoughts as well.

The article is authored by Kevin Hatala of George Washingotn University and colleagues and is titled “Variation in Foot Strike Patterns during Running among Habitually Barefoot Populations.” It was published in the on-line, open source journal PLOS One (you can read the full text here).

The Hatala study certainly is thought provoking, and it raises a number of interesting questions regarding the factors that determine how our foot strikes the ground when we run.

Let’s start by looking at what they did.

The group filmed 38 individuals (19 male, 19 female) from a habitually barefoot tribe in Kenya (the Daasanach) as they ran along a packed sand surface onto a pressure mat. In his interview with Amby Burfoot, Hatala describes the surface as “…a firm sand surface. It has a little give, but it’s not at all like a beach sand.” The running trackway was about 15m long. It is not clear to me if any warmup running was conducted. The runners each ran along the trackway 3 times at a self-selected endurance running pace, and 3 times at a sprinting pace.

The group defined foot strike based on the location of pressure recorded by the mat at initial contact:

“A RFS was identified as a trial in which the first data frame included pressure on the heel only. A FFS was identified as a trial in which plantar pressure was exerted only on the forefoot (metatarsal heads) at touchdown. The heel almost always contacted the ground in these cases, but not until later in the stance phase. A MFS was considered to include trials where initial contact occurred at the lateral midfoot (cuboid/base of the 5th metatarsal), and also those trials where initial contact included both the heel and forefoot.”

I would quibble a bit with their definition of a forefoot strike since contact way up by the metatarsal heads is pretty rare in the videos I have analyzed over the years – I tend to view a forefoot strike as one that involves initial contact anywhere from the base of the fifth metatarsal forward without concurrent heel contact. A midfoot strike would only include those landings with simultaneous heel and forefoot contact. As such, I’d be wary of interpreting too much from the rarity of “forefoot strikes” in their results.

At average endurance running pace (3.3 m/s, or a bit over an 8:00/mile pace, though the individual range was up to a 12:30 min/mile pace), 72 percent of the foot strikes observed were heel strikes, and 28 percent were midfoot/forefoot. They did not break this down by individual, so it’s hard to know if, say, the 28% who were midfoot/forefoot striking were doing so in all of their trials (this data would have been helpful). At the fastest sprint paces (6-7 m/s, or about 3:50-4:30 min/mile) they observed 40% heel strikes and 60% midfoot strikes (note that they observed no forefoot strikes at the fastest pace range, which I think has mainly to do with how they defined a forefoot strike as contact at the met heads). They found a significant speed effect – the subjects were more likely to switch to a midfoot/forefoot strike as speed increased.

Most of the discussion surrounding this paper has been regarding how the results contrast starkly with those reported by Harvard’s Daniel Lieberman in his now famous 2010 study of barefoot Kalenjin runners from Kenyan. In that study, among other things, Lieberman observed that those Kenyan adolescents who had never worn shoes landed on their midfoot or forefoot 88% of the time when running at a self-selected pace on a dirt road (contrary to what was written in the New York Times article, Lieberman’s Kenyan subjects were not running over a pressure mat). This is obviously quite a different result from that reported by Hatal et al.!

The results have been interpreted to suggest that maybe we humans did not evolve to run barefoot using one particular type of foot strike. The reality is that Lieberman’s own data had already indicated the same thing – although the percentage was far lower, a few of his fast running, habitually barefoot Kalenjin subjects did indeed land on their heels (their self-selected pace was about a 4:50 min/mile). I was fascinated by this particular finding, and asked Lieberman if we should all be using only one type of footstrike when I interviewed him for my book. Here is the passage from Tread Lightly where I quote his response:

“So is there even a “one-footstrike-fits-all” scenario? Daniel Lieberman says no, expressing skepticism that there exists one optimal type of foot strike that should be used under all conditions. “I think everybody does everything. This idea that you’re just a forefoot striker, or just a midfoot striker, or just a heel striker is bizarre. Variation is what biology is all about—everybody does everything! I think barefoot runners heel strike sometimes, of course they do. I don’t think they do it all the time. It’s speed dependent, terrain dependent, warm up dependent, etc.”

I think this quote really gets to the heart of the issue. The reality is that foot strike is likely influenced by a whole bunch of different factors, and to their credit the authors of the paper discuss many of these. It’s also very difficult to compare the results of the Hatala study with the results of Lieberman’s study because they don’t represent a very controlled comparison. Perhaps the most important difference is the fact the Daasanach studied by Hatala are not known to be habitual runners – regarding this, Hatala stated the following in his interview with Burfoot:

“…I would say that there is not a clear “running culture” such as that which the Kalenjin are known for. Children are always running as they spend a great deal of time playing outdoors, but it is not common to encounter someone running purely for exercise.”

In contrast, Lieberman’s habitually barefoot subjects averaged nearly 20 km of running per day. In other words, one sample practiced the movement pattern being studied an awful lot every single day, whereas there other sample did not. We are now learning the importance of neuromuscular control in determining running form, and it’s not so surprising to me that a population that doesn’t run much at all might adopt a foot strike that is a bit different than that of a high mileage sample. What was particularly striking (no pun intended!) to me here were the results observed during sprinting – it’s odd to see such a high percentage of heel strikes in a sprinting gait, and this makes me wonder if there is something unusual about the Daasanach sample.

Other factors might also come into play here as well. It’s really difficult to know for sure, but there may have been differences in surface hardness between the two studies (packed sand plus pressure mat on top vs. dirt road), and both are likely quite different than the asphalt that many of us run on day in and day out (data I have for barefoot runners on asphalt is much closer to what Lieberman observed). Surface properties are well known to influence things like limb stiffness, and this should be considered in any discussion of foot strike (and Hatala et al. do emphasize this).

Problems not much discussed with the Hatala protocol is that there does not appear to have been a warmup, the runway was only 15m, and the runners had to land on a pressure plate (leading to the possibility of mat targeting). These factors are frequently cited as problems by biomechanists I have spoken to who do lab-based research, and is why many prefer using a force treadmill even though it also might not perfectly simulate overground running – they feel that the drawbacks of using a treadmill for analysis are far fewer than those associated with having subjects run along a short trackway. In other words, you can get away with running on your heels for 15m, but try doing that continuously for several miles and you might see a different response.

The last point I’ll make here is one that have made repeatedly – all heel strikes are not created equal. There is enormous variation in the category we refer to as “heel strike,” and this includes variable ankle dorsiflexion, variable position of the contact point relative to the center of mass, variation in joint angles, and so forth. It’s quite possible that another aspect of gait is more critical to our ability to run barefoot than foot strike – for example, gait expert Jay Dicharry believes that stride length may in fact be much more important, and it is well known that running stride length tends to shorten when people take their shoes off. My guess is that it would be unlikely to find the Daasanach runners overstriding barefoot to the degree that many recreational runners do. It is worth noting that the foot in the photo of a heel strike accompanying the article (see below) is actually still quite a way from making contact with the pressure mat – a lot happens to foot position and lower limb orientation in the final milliseconds prior to contact.

In summary, I found the results of this paper to be very interesting, but I think they need to be interpreted in the context of the subject population (mostly non-runners) and the conditions under which they were obtained. The great value of this study to me is that it highlights the fact that we don’t know everything there is to know about what determines foot strike patterns, and it emphasizes that we can’t simply say that everyone who grows up barefoot will forefoot strike when they run barefoot. It’s just not that simple. The human body is incredibly adaptable to the conditions it finds itself in, and as Lieberman pointed out, we need to investigate in more depth how factors like speed, surface, warmup state, running history etc. affect foot strike and other aspects of running form.

Like any good piece of science, this one raises a lot of questions, and based on the author’s comments in his interview with Amby Burfoot, it sounds like they are teaming up with Lieberman to investigate the factors that distinguish the samples they studied. It will be interesting to watch for their results!