Barefoot Running Carries Risks and Rewards: Should You Stick to Shoes?

Ultramarathoner Gordy Manuel stands at the starting line of the Wounded Knee 100-Mile Trail Ultra. Above the ankles he looks like any of the others who are milling around, waiting for the race to start, but a look further down reveals a striking difference: Manuel is barefoot.

“I’ve run several hundred milers,” says Manuel, “but my times just don’t seem to be improving. My feet and legs start to ache around mile 50, my muscles just feel beat up. Something needed to change.”

Manuel became intrigued by the idea of running barefoot after reading about the growing scientific evidence that humans evolved to run barefoot. “Cavemen didn’t wear Nike’s,” reports Manuel. I asked Manuel how much experience he had running barefoot. “None,” he says with a grin. “Look, if my ancestors didn’t need shoes, then neither do I. Barefoot running is supposed to be more efficient, and it’s supposed to reduce the pounding on our feet and legs, so I figured ‘what the heck,’ I’ll give it a shot.”

Not everyone agrees with Manuel’s assessment of the benefits of barefoot running. Podiatrist Harry Tucker reports seeing an increased number of patients with barefoot-running related injuries in his clinic. “It’s really shocking – I never used to see any barefoot running related injuries, now I’m seeing maybe one or two per month,” reports Tucker. “This barefoot running phenomenon is the most dangerous thing I’ve seen in all of my years as a clinician. I walk outside after spending a day in the clinic, and there all of these people hobbling around barefoot, barely able to even keep up a slow jog. It doesn’t have to be this way.”

Tucker describes one particularly gruesome story of a patient, Matt Peters, who went barefoot cold turkey and refused to cut back his mileage. “He had literally eroded the plantar skin under his forefoot so much that he had exposed the bones. He was running directly on his metatarsal heads. He came in because of some pain associated with his injury, but he was adamant that he wasn’t going to stop running barefoot. I patched him up as best as I could, but I fear that he’ll be back before long.” 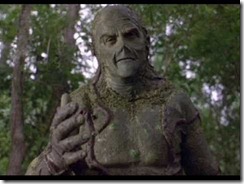 I caught up with Peters to check on how his recovery was going. “Yeah, it was a pretty bad injury, but there was no way I was going to go back to wearing shoes. The doc kept throwing fancy terms at me like “varus” and “equinus” and he told me I should be wearing orthotics – I don’t know what the heck he was talking about, does he think I’m a freaking horse? At least he bandaged my foot up pretty well, so I was able to keep running barefoot. And you know what? After about a month the skin had almost completely grown back. It was amazing! You ever seen that old movie Swamp Thing? You know that scene where his arm was cut off and he was locked up in the dark room and then a ray of sunlight happens to hit his arm and it started to sprout back? It was like that. Barefoot running helped my skin grow back, I’m sure of it. It’s those electrical fields you connect with when the skin contacts the Earth, they must stimulate cell division or something. My feet feel great now thanks to barefoot running. Yep, barefoot running…”

Gordy Manuel isn’t so sure about the benefits of barefoot. I’m waiting in the 10 mile aid station of the Wounded knee 100-Mile race as he arrives, hobbling and in obvious pain. “This barefoot thing may have been a mistake. I stepped on a thorn at mile 3 and it pierced straight through my toe. My feet hurt, my ankles hurt, and my calves are screaming,” he says in disgust. “But I’m going to keep pushing on, maybe I’ve just hit a rough patch.” Asked if he thinks the hundred miler is just too-much-too-soon for his tender, shoe adapted feet and legs, he replies “Nope, I’m a human, this is how I’m supposed to run. I’ll get to the end of this race if it kills me.”

Manuel dropped out of the race at mile 15, and has been diagnosed with a metatarsal stress fracture. He’s still adamant about being barefoot, though. “No way will I go back to shoes, but I think I should be a bit more careful. Should have just done a 50k instead of the 100,” he says reflectively, “I was dumb.”

Dumb indeed, and only time will tell how many others follow in his unshod footsteps.

The individuals mentioned in this story are fictitious and do not represent anyone real (well, maybe they do). Despite media articles depicting passionate feelings on either side of the barefoot running debate (much like the obviously fake examples here), barefoot running can be good for some people and bad for others. Any adaptation to a new style of running takes time and must be done carefully, and this applies even moreso to running completely unshod. We tend to hear mostly about the extreme cases, but barefoot running can be safe with a bit of caution and a slow buildup, and it can be harmful if you do too much too soon. Read my thoughts on the pros and cons of barefoot running here. You can also hear my thoughts on form and footwear in a lot more depth on this episode of Trail Runner Nation.

You just finished reading Barefoot Running Carries Risks and Rewards: Should You Stick to Shoes?! Consider leaving a comment!