I’ll start this post by saying that I’m a firm believer in the value and benefits, both mental and physical, of minimalist running.  I run mostly in lightweight trainers (<10oz, currently the Brooks Launch), racing flats (currently the Brooks Green Silence), and the Vibram Fivefingers. It’s been almost a year now since I’ve run regularly in any kind of stability shoe (which apparently is the type of shoe I’m supposed to be wearing – at least so said the person at the running store where I bought my first pair of real running shoes), and my general preference is for a shoe with as low a heel as possible. If you want to hear my full thoughts on minimalist running, you can check out my podcast on minimalist running here.

Now, although I consider myself to be a minimalist runner, what to now I have not been is a barefoot runner. Before tonight, the only truly barefoot running I had done were a few short burst on a treadmill during some filming sessions in my lab. However, for some reason I decided earlier today that I really wanted to give it a try, and that tonight would be the night. Never mind that it was in the high 30’s outside, or that it had been raining most of the day – no, when I get an idea in my head I tend to just go with it come hell or high water.
So, after getting the kids to bed, I straped on my Vibrams, popped on the headlamp, and headed out the door into what was a very foggy, almost to the point of being eerie, night.  The first four miles of the run were just a nice easy jaunt in the Vibrams, like so many that I have done at night of late. My Vibrams represent freedom to me, and my runs in them are among the most enjoyable that I do. Often, I find that if I’m lacking the motivation to run, I’ll just decide to make it a Vibram run and that’ll be enough to get me out the door. The run was fairly uneventful aside from the fog, a few snowflakes, and the puddles that were scattered about from the rain earlier in the day, and I went back and forth over those initial miles about how long I wanted to go fully barefoot at the end. I though maybe a mile, but when I got to my “mile-from-home” marker, there was an older gentleman out for a walk, and I wasn’t about to shed my shoes and take off barefoot in front of him – I may be a bit crazy, but at least I try to hide it well. In what turned out to be a wise decision, I opted to run another 1/2 mile in the Vibrams and shoot for just a half mile fully barefoot.

I reached the half-mile-from home mark, crouched behind a tree (it was quite comical, really!) and pulled off my shoes. I honestly felt like I was stripping naked in preparation to streak the whole way home – that’s how odd it felt to be running barefoot in the dark on a cold, wet night. I didn’t really know what to expect other than that others had told me that barefoot running is all about the nerve endings – supposedly you can feel/sense a much greater connection to the ground underfoot when running sans shoes. I took off down the sidewalk in all of my barefoot glory, and my immediate thoughts were the following:

“Wow, it’s freaking cold when you run barefoot when it’s 38 degrees outside.”

“Man, those little pebbles hurt like hell when you step on them.”

and “OK, I’m losing all sensation in my feet – perhaps frostbite is setting in.”

I wanted to love this experience, I really did. Unfortunately, and I hate to say this to any of you who are barefoot running proponents, I didn’t find the experience to be particularly enjoyable. When I could feel my feet, the increased sensation I felt was mostly the stinging pain of the pebbles digging into my tender foot-skin. As things progressed, all I could feel was the stinging pain of the cold slowly removing sensation from the soles of my feet. When I stopped after returing home, all I could feel was the stinging pain as my feet slowly thawed out. You might say that I was stupid to run barefoot in these cold conditions, and I would very much agree with you. You might say that it will be better if I try it when it’s warmer outside – maybe, but I suspect those pebbles will still hurt like hell. To be quite honest, what I learned tonight is why humans tend to like to wear shoes on their feet – they make walking and running a lot more comfortable. And I’m not arguing that you go out and buy a heavily cushioned running shoe – I’m perfectly content to run in my completely uncushioned Vibrams, and I honestly don’t see a lot of benefit to running barefoot over running in my KSO’s – biomechanically, I’d guess that it’s basically the same experience. 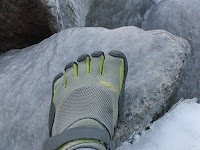 I never really had much intention of becoming a barefoot runner, but I’ve always believed firmly in trying things out before passing judgment. I can now say that I’ve tried barefoot running, and I realize this was just one short run under non-ideal conditions, but I’m having a hard time seeing any benefit to barefoot running that can’t be obtained by wearing Vibrams or something similar. And the benefit of Vibrams is that they allow you to run over those little pebbles without the stinging pain, and you can wear them when it’s cold out so that you don’t freeze your feet (I’ve worn mine in temperatures below 20 degrees Fahrenheit). I do strongly believe that humans evolved to run barefoot, but I also believe that there are situations where wearing shoes makes a lot of sense. As we as a species evolved, we invaded new habitats where the environmental conditions were vastly different from those where we originated. One of the adaptations that we possess as a species is the ability to use our intelligence and resourcefulness to invent devices that might help us to survive in those new habitats. When my ancestors arrived in Northern Europe, I’m quite confident that they were not running barefoot through the Swedish winter – it was a place where wearing something on the feet made good sense. Similarly, I think it’s great that people can run barefoot and love doing it, but I just don’t think that it’s for me. Will I give it another try? Perhaps when it’s a bit warmer, yes. But right now, I’m quite content to run with rubber under the soles of my feet.

Update 3/13/2010: Just added a podcast episode to go along with this blog post on barefoot running: https://runblogger.com/2010/03/barefoot-running-podcast-my-first.html.

Update 5/2/2010: I’ve now done a second, longer barefoot run in much better conditions – you can read about it here: https://runblogger.com/2010/04/barefoot-run-2-much-better-but-still.html.
cript”>