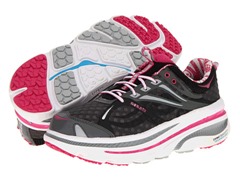 One of the big challenges I face in writing this blog is trying to remain objective given that I have personal biases stemming from my own experience. For example, I review, promote, and like running in more minimal shoes and don’t foresee myself ever going back to more traditional models. However, I try hard to resist the urge to convert this personal preference into a general recommendation for all runners. It’s challenging at times, and I sometimes I may project this preference more strongly than I should, but I recognize that other people have had positive experiences running in motion control, and others have had great success running barefoot. Different strokes for different folks, the important thing is finding what works for you.

There are lots of examples of where I see people making general claims relating to running that stem from their own experience, and it’s important to remember that your individual experience is related to the specific circumstances that you face. It may not be generalizable to all. I’ll give some examples.

In response to my post yesterday about the Army study showing no difference in injury rates between traditionally and minimally shod runners I got some comments along the lines of “Going minimal fixed my injuries, this research in bunk!” I have no doubt that many individuals have had great success going minimal and have used it as a tool to overcome long-term injury. That’s great! And these stories are important because they give us some insight into strategies that might work when a runner encounters a particular injury. But, I also know people who have gone minimal, broken their foot, and returned to more cushioned shoes (and yes, I understand that they may have transitioned to quickly, but they might also just be more susceptible to bone damage…). I also have friends who are much faster than me that have run in motion control shoes with success for much of their running career. The point is that, yes, your story is important, but it may not be reflective of the experience of other people out there. People are highly variable – we vary anatomically, physiologically, and our life experiences and circumstances differ. Why would we expect the same solution to work for every person?

Another example I see often comes from the clinical environment. Some clinicians have reported seeing a big uptick of injured minimalist runners showing up in their clinics and thus minimalist running is deemed dangerous. However, I’m sure they also see quite a few injured traditionally shod runners as well. Minimalist running is a relatively new phenomenon (and yes, I know someone will comment that traditionally shod running is what’s really new in the longer span of human history, but it’s the norm in the professional experience of most clinicians practicing right now…). Any time something new appears on the scene you are likely to see an uptick in injuries related to the practice. I’d wager that clinicians have seen an uptick in yoga or crossfit related injuries in recent years as well. Does that make those practices bad or dangerous? (I’m sure I may get some colorful responses to that question!)

The problem for clinicians is that they see people who are injured. If you’re not injured, you don’t go to the doctor or therapist. If you take up minimal running and your knee stops hurting, you no longer show up in the clinic. Docs deal with the bad cases. The importance of studies like the Army study (presuming it gets vetted through peer review and published) is that it suggests that when you look a broader sample of minimal shoe wearers, they tend to not get hurt any more or less than traditionally shod individuals. However, when they do get hurt it may be in new and different ways, which makes sense since tissues are stressed differently when you wear minimal shoes. The importance of clinical experience is that clinicians can give us a sense of which injuries are more common among this new population. They are on the front lines dealing with the wounded. For example, it seems that with minimal running we more frequently see things like metatarsal stress fractures, calcaneal fractures, plantar fascia tears, etc.  Clinicians help reveal these patterns, and can help develop strategies to minimize risk and effectively treat the problems when they arise.

I’ll add one more example that is a slight bit different. I was reading through a Facebook conversation the other day in which a comment was made along the lines of “the only way to get faster is to run more.” The implication seemed to be that shoes and form aren’t that big a deal. Someone else responded that this may be true, but that you can only run more if you can do so without getting injured. And, avoiding injury may have a lot to do with managing footwear, mechanics, etc. Even better, I had a guy on Twitter tell me the other night that I was a “hobby jogger minimalist pumper” and that to combat overstriding people need to stop “slow-twitching” themselves to death and start working more on top end speed. I can guess what might happen if I tried having my couch to 5k group running sprints instead of the slow buildup approach we are taking…

The problem here is that it can be hard for people who are in good physical condition and not susceptible to injury to recognize what a battle it is for some to simply be able to run more or run faster. I can use myself and my wife as an example. I’ve been lucky to have not suffered a serious injury in the 6 years that I’ve been a serious runner. I’ve had my share of aches and pains, but nothing that’s required more than just a few days of rest to resolve. I can generally increase my mileage and do speed-work without running into major trouble. And yes, increased mileage makes me capable of running faster races. I can also seemingly run in most any shoe, or even barefoot, without much trouble. I’m lucky like that.

My wife on the other hand has been more or less unable to run regularly for several years. Chronic hip pain and foot pain have been her nemeses (you can read more about her story here). Running more miles is not going to make her faster, it’s going to make her hurt. She’ll break, and won’t be able to run at all. We had to address the underlying mechanical problems, and yes, footwear, to get her right enough to even be able to run a few miles without pain. She’s now able to run 2-3 times per week, 3 miles at a time due to a combo of strengthening exercise prescribed by a doc and Hoka One One Bondi 2

shoes prescribed by my friend Nate. The Hokas are the only shoes we have tried that allow her to run without foot pain, and we have tried a lot. As a minimalist, it pained me to discover that an ultra-cushioned shoe was the answer, but having her be able to run is more important to me than validating my personal preferences in footwear.

My wife is now at a point where running more might be possible, and increased speed might result, but it took a heck of a long time to get here. Downplaying the role of biomechanics and footwear because your experience is that they don’t matter much makes little sense.

So, I’ll finish by saying that yes, your opinions and experiences are important, and you should share them. We all learn from hearing about works for others, and it lets us have productive debates. But, be careful in thinking that what you have observed or experienced is broadly generalizable. It may be, it may not be. Sometimes you may just have to swallow you pride and recognize that Hokas will let your wife run without pain. And that makes for a happy household

You just finished reading Be Careful About Converting Your Experience into a Prescription for All Runners! Consider leaving a comment!