Biggest Drawback of the Apple Sport Watch For Runners: No On-Board GPS 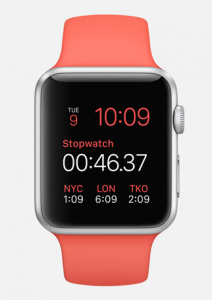 The big news yesterday was Apple’s announcement of two new iPhones as well as the Apple Watch. Like most people, I’ve been eagerly anticipating the announcement of the Watch since rumors have consistently hinted at a slew of fitness-related features. Done well, the watch had the potential to be a game changer in the fitness tracking market.

I’ve spent the morning reading through a lot of the press about the Watch release. In many ways Apple did not disappoint – the Watch in general has a ton of interesting features, and on the fitness front it has a built in optical heart rate monitor that allows you to ditch a chest strap (looks similar to that on the Mio Link which worked quite well for me), does fitness tracking, and can do run/workout tracking (see more on this below though). However, I don’t see these fitness features as being that unique compared to other fitness devices already on the market, and I’m left feeling a little underwhelmed.

The video below provides a nice overview of the features of the Sport Watch:

The one feature that is missing that concerns me the most as a runner is the lack of integrated GPS. This means that for the Apple Watch to function as a run tracker, you need to have your phone with you on the run – the GPS chip on the phone does the recording, and the watch pulls the data from the phone. There are other devices on the market that function in a similar manner, including the Magellan Echo, and they can work well, but carrying your phone with you on every run can be a bit of  pain 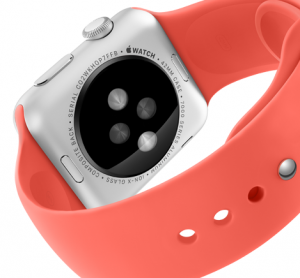 (particularly the larger iPhone 6’s that were announced!). I really like the Magellan Echo for example, but there are times when I really would rather leave my phone home and just head out with a wrist-based GPS device.

I’m not a tech expert so just speculating here, but I wonder if the absence of on-board GPS has to due with battery life issues. Apple has been quiet about expected battery life for the Watch, which could be another drawback for those who plan to use it as a fitness device. If I had to guess, we will at some point see an iteration of the Apple Watch that has built-in GPS, but without it my interest in this one is lessened significantly.

How about you, excited or underwhelmed by the Apple Watch as a fitness device?

You just finished reading Biggest Drawback of the Apple Sport Watch For Runners: No On-Board GPS! Consider leaving a comment!