I met Nate Sanel several years ago in a somewhat fitting setting – he was running across the state of New Hampshire with his friend Sherpa John Lacroix. At the time I’d never run with an ultrarunner before, and the concept of running longer than a marathon seemed a bit crazy to me.

John and Nate were planning to run over 100 miles in their quest to run across NH at its widest point from West to East. My friend Jim and I met them for about a ten mile section that ended up in my hometown, at which point Nate had to drop out of the run due to shin pain. 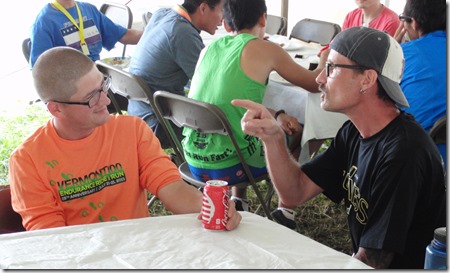 In the years since Nate and I have become good friends, and he’s now a frequent contributor to this blog. Last year I crewed for Nate at the Vermont 100 – it was a phenomenal experience, but sadly he had to drop at mile 70 with severe foot pain (he had been battling plantar fasciitis at the time, and he also had some nasty blisters). Nate was back at the starting line of the VT 100 again this year (I was there to pace another friend – I’ll write that story up soon), and he had put in some of his best months of training leading up to this race. He was ready to crush it, but doubts fueled by another DNF at Massanutten earlier this year lingered (he had pnuemonia and only made it 20 miles).

Here’s how Nate describes his feelings at the starting line of VT100 2013:

“…I find myself full of nervous anticipation.  I want to break 20 hours.  Badly.  But I don’t know if my head is strong enough.  Will I fail once again?  I tell myself to relax and trust my training.  I know that if things go terribly wrong my real goal is to just finish.  If things go right hopefully I can get that sub 20 hour finish that has eluded me at this race.”

So how did it go? Well, I’ll let Nate tell that story, but as you might suspect by the title of this post it went quite well. Head over to his blog to read his full VT100 race report! 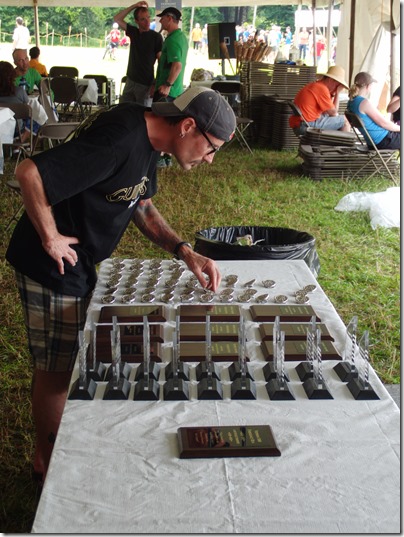 Nate examining what will soon be his hardware…