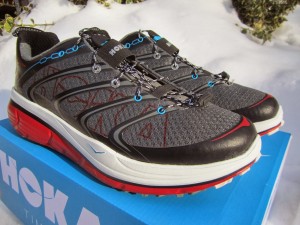 Nate Sanel just posted reviews of the Hoka Rapa Nui Tarmac 2 and Rapa Nui Trail 2 over on his blog. I hope to get a pair of these to try as my first Hoka (I have the Mafate but only ran in it once – not bad, but way too much shoe for me), and if I do I’ll definitely be writing about them. The Rapa Nuis  are currently the lightest shoes in the Hoka lineup pending arrival of the Hoka Huaka and Clifton later this year.

“I don’t know if I’ve ever anticipated getting a shoe longer than the Hoka Rapa Nui. I first saw them on Karl Meltzer’s feet, then saw a post about them on Ian Corless’ blog in August of 2012. I was extremely intrigued. I have had every single model that Hoka makes, eventually deciding that my favorite was the Bondi Speed. I have run thousands of miles in Hokas, even naming the Bondi Speed my top trail shoe of 2012. It was like a late Christmas present when I finally received a pair three weeks ago.”

To see Nate’s verdict on the Rapa Nuis, head on over to bikernate.com!