Book Review: Running With the Kenyans by Adharanand Finn 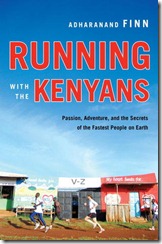 One of the best things about being done with my own book is that it has afforded me time to start reading books for pleasure once again (except for, ahem, my reading of the Hunger Games series last winter…). The first book that I picked up after submitting my final manuscript was Running With the Kenyans by Adharanand Finn (disclosure: this book was a media copy provided free of charge by Random House).

Running With the Kenyans is a book that I had been looking forward to reading for quite some time. I was familiar with Finn’s work through a series of articles he wrote for The Guardian on running in Kenya, some of which I excerpted in my own book. His description of kid’s racing barefoot in Kenya was of particular personal interest.

The book is essentially the story of how Finn, a guy about my own age, decides to move with his family to the town of Iten, Kenya for six months to train and live among the best distance runners in the world. His motivations are many: to experience an adventure with his family, to take another crack at improving his running performance by training with the best, and to see if he could uncover some of the “secrets” that make the Kenyan runners so darned good at what they do.

There’s a lot to like about this book. Being a fairly self-competitive runner and a father of young kids, I could identify with Finn on an individual level, and the personal story struck a chord with me. Part travelogue, part running book, Running with the Kenyans is well written and a fast read – it’s a book that I had a hard time putting down. One of the things I enjoyed most about the book is that it gives a glimpse into the lives and personalities of the athletes that win most of the major distance races around the world. Included among the cast of characters are several runners who will be competing in the London Olympics in just over a month – it’s hard to read this book and not want to take a trip to Kenya to see these amazing individuals run the Thursday fartlek in Iten!

What will make this book of particular interest to many runners is Finn’s dissection of the factors that make Kenyans such phenomenal runners. What you come away with after reading Running With the Kenyans is that there are a lot of things that contribute to Kenyan running prowess, and that it’s the mix of factors coming together in a single location that is more important than any individual factor on it’s own.

Among the factors that Finn thinks are critical are an active, physical upbringing (involving a lot of running to and from school), a drive and motivation to succeed because running is a way out of poverty and a life of farming, immersion in a culture where elite runners are worshipped and are figures of immense respect in communities, and many others which I won’t give away here.

I did want to share a brief excerpt that will be of interest to readers of this blog. At one point Finn asks Brother Colm, who coaches many of the young elites, including Olympian David Rudisha, about barefoot running and form – here’s is part of Colm’s response:

“In the West we put children in shoes before they can walk. What are we teaching them? We’re teaching them the ground is dangerous, that they need to be protected from it. But Kenyan children can feel the ground, so they have a better relationship with it. They learn to place their foot carefully when they run, so they don’t hurt themselves. They learn to land gently, lightly, gliding over the earth rather than pounding it.”

Colm goes on to describe how he works with the Kenyans on form, but I don’t want to give away all of the good stuff here, you’ll have to read the book. I will note, though, that Finn observed that all adult Kenyan runners wear shoes, it’s just the kids who tend to go barefoot.

One other excerpt that I found interesting is the following:

“It’s interesting to note that the runners here still get injured despite their barefoot upbringing, but the types of injuries they get are different. ‘I don’t see many impact injuries,’ the physiotherapist at Lornah’s camp tells me one day. These are common injuries in the West and are usually the most serious and debilitating; things like runner’s knee, shin splints, plantar fasciitis, and stress fractures. In my time in Kenya I haven’t met a single athlete suffering from any of these problems. If someone is injured, it is always something less serious, such as a tight hamstring or a pulled calf. Or a cut leg.”

Running With the Kenyan’s is full of interesting passages like this one, and if you find these topics interesting you will really enjoy this book. It’s near the top among running books that I have read, and I highly recommend that you pick up a copy.

Running With the Kenyans is available for sale at Amazon.com.