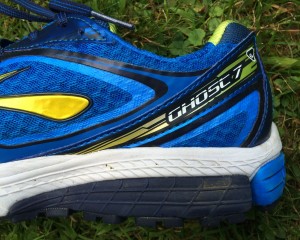 Lately I’ve been branching out a bit in my review shoe choices in order to get a better feel for the differences among the various types of shoes that exist in today’s footwear market. A few weeks ago I reviewed the Hoka Clifton (the Hoka Huaka worked out a bit better), a lightweight yet super-cushy shoe, and found that the ride didn’t quite work for my stride. It wasn’t so much the stack height as it was the overall softness of the midsole. And back in June I reviewed the Nike Pegasus 31, a fairly traditional neutral trainer, and actually liked them quite a bit. The stack heights are similar when comparing the Pegasus 31 (29mm heel, 19mm forefoot) to the Hoka Clifton (29mm heel, 23mm forefoot), but I preferred the less mushy ride of the Peg.

Given my positive experience with the Pegasus, I was interested in trying another traditional neutral shoe to see how it might compare. Brooks was kind enough the send a pair of the Brooks Ghost 7 (Disclosure: these were media samples provided free of charge by Brooks), and I’ve gotten enough miles on them now to share some thoughts.

Let’s start with the specs. The Ghost 7 weighs in at just over 10 ounces in men’s size 9, and stack heights are 28mm heel, 17mm forefoot (data via Running Warehouse). The latter are pretty much in line with the stacks reported above for the Nike Pegasus 31 and the Hoka Clifton. What’s interesting to me is that standing in the Ghost, it doesn’t feel like a 10+mm drop shoe. It may be that my heel sinks into the midsole a bit, or maybe my tolerance has just changed with time, but I don’t tend to be bothered by a higher drop shoe these days unless the heel is very firm.

The Ghost has a fairly substantial mesh upper with extensive welded overlays. Breathability is adequate, and I have not encountered any hot spots or points of abrasion.

The heel counter is fairly rigid, but the interior of the heel counter is well padded and covered by a soft material the feels quite comfortable against the foot. There’s more structure in the heel region than I’m typically used to as a more minimal-leaning runner, but I haven’t had any problems with it.

The tongue of the Ghost 7 is well padded and I have not felt any pressure from the laces as a result. There’s also a cool little loop near the top of the tongue that the lace on one side slides through – seems to do a good job holding the tongue in place and preventing slippage (you can see this loop in the image below – it has the alternating white/black band down the middle). 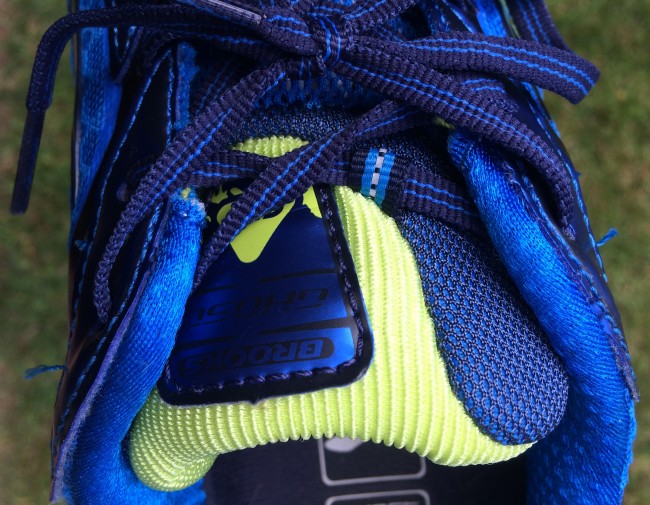 The fit of the Ghost is near perfect on me in my usual size 10. I have a full thumb’s width between my big toe and the tip of the shoe, so if anything they run a bit on the larger side. The forefoot is fairly wide and provides plenty of room for my toes to move around. It feels distinctly wider than the forefoot of the Nike Pegasus 31 (see image below – Peg on the left, Ghost on the right), though the latter has a stretchier upper. Fit through the heel and midfoot are comfortably snug, and the laces provide a good lockdown. 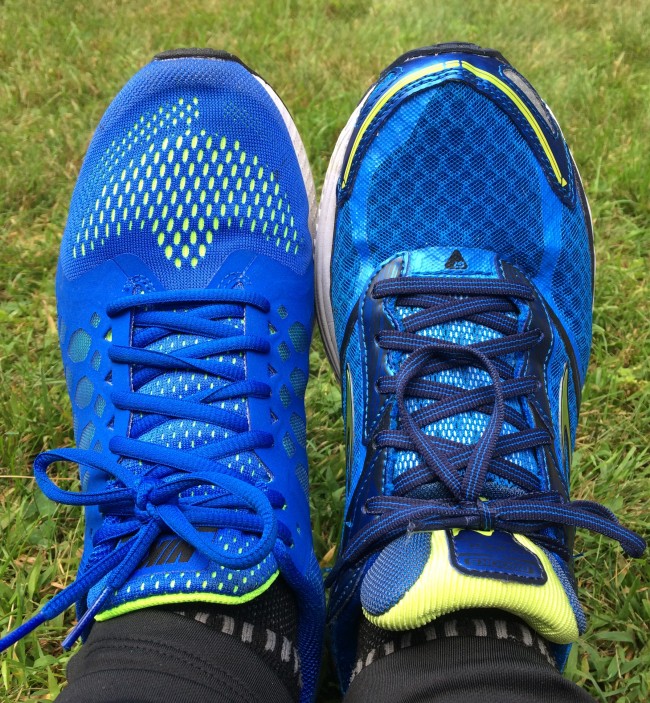 As with the Hoka Clifton and Nike Pegasus 31, the Brooks Ghost has more sole than I typically like in a running shoe (28mm heel, 17mm forefoot), but I don’t feel like it’s a mis-match for my stride like the Clifton was. I’ve actually enjoyed running in them, and I’d compare the Ghost quite closely to the ride of the Peg – the heel is fairly soft (though the heel of the Ghost feels springy compared to the slightly mushier heel of the Peg), and the forefoot is firm and responsive. I have not run in previous versions of the Ghost, but apparently one of the changes in v7 is removal of the Brooks DNA inserts – instead the sole is a springy feeling BioMoGo-DNA blend. Feels similar to some of the Brooks Pureproject shoes I’ve run in. I think the cutout area in the center of the heel also contributes to the springy feel, and perhaps to the sensation that the shoe is lower drop than 10mm – my suspicion is that this area compresses downward while you stand in the shoe. Flexibility is decent given the thickness of the sole, but this is no Nike Free.

I’ve run over a range of paces in the Ghost and though it doesn’t compare to a racing flat, it has a decent level of responsiveness for a traditional neutral training shoe. However, for most people the Ghost will be best suited as a daily trainer or marathon shoe. I haven’t run in many other shoes in this category so it’s hard for me to compare it to shoes like the Saucony Ride or Mizuno Wave Rider for example, but I’d not hesitate to recommend the Ghost if you’re looking for a traditional neutral shoe with plenty of cushioning.

One possible area of concern with the Ghost 7 is outsole durability. There’s quite a lot of rubber outsole on the bottom of this shoe, but the little square nubs along the outer margin seem to wear quickly if they experience a lot of abrasion. I recently met another runner who had sheared a bunch of them off under the outer forefoot without too many miles on the shoe, and I’m seeing some shearing on the nubs along the side of the heel. Anyone else have comments on outsole durability in the Ghost?

I’ve been enjoying experimenting with footwear a bit outside my normal range of preference as it allows me to get a sense of how shoes in various categories differ from one another. The Brooks Ghost 7 is a fairly typical neutral training shoe providing ample cushion, a roomy fit, and reasonable flex for a shoe with a fairly substantial sole. I like the springiness of the cushion under the heel, and the firmer, more responsive forefoot.

The closest comparison I can make among shoes I have tried recently is to the Nike Pegasus 31, with the Ghost providing a roomier fit up front and springier cushioning in the heel. The Hoka Clifton is similar in stack but lighter and lower drop, so not quite in the same category. It offers a much softer ride that doesn’t work as well with my stride. Though I personally prefer a bit less shoe, if you’re looking for a neutral shoe to eat up miles and possibly use for long races, the Brooks Ghost 7 is worth a look.

The Brooks Ghost 7 is available for purchase at Running Warehouse, Zappos, and Amazon.com (or your local running specialty store). Purchases made via these links provide a small commission to Runblogger and help to support the production of reviews like this one – thanks!