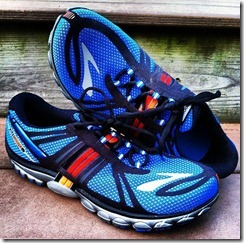 A few weeks ago I got a cryptic email from Brooks asking for my shoe size and mailing address. It’s been awhile since I’ve had contact with Brooks, but was hoping that maybe I’d be the recipient of a pre-release sample of the new Pure Drift zero drop shoe. I recently saw that Scott Jurek had a pair delivered to him in a giant chocolate egg, but alas I’m not Scott Jurek, and there was no chocolate egg or Pure Drift for me :). Rather, I received a package just prior to Thanksgiving that contained a pair of the forthcoming Brooks PureCadence 2 disclosure: these shoes were a media sample provided free of charge by Brooks).

I have to hand it to Brooks – if there is one thing they’re good at it’s marketing. The shoes arrived in one of the fanciest shoeboxes I’ve ever seen:

The shoes themselves were equally eye-catching – the Pure Cadence is a darned good looking shoe:

Whereas I have reviewed the original iterations of the Brooks Pure Flow and Brooks Pure Slip Grit (both of which I liked), I never did buy a pair of the original Cadence. Thus, I checked the Running Warehouse blog for info on the update. RW reports that “the PureCadence 2 carries over the midsole and outsole of the original PureCadence, with a new upper featuring a redesigned Nav Band for better fit through the midfoot.” Thus, it seems that the major update is to the upper, which in this iteration includes a burrito style tongue (similar to the Green Silence).

Here’s a video from RW and Brooks detailing the updates:

So what are my first impressions of the PureCadence?

This is one of those shoes that feels very different on the run as compared to walking or standing still. When I first put them on my reaction was that they felt really soft and unstable, which is strange considering that the Cadence 2 is the “stability” offering in the Pure Project lineup. I did my usual single leg balance test and felt like the shoe tended to cave a bit toward the medial side of the forefoot – again, not what you’d want in a stability shoe. It is a comfortable shoe for walking if you like soft cushioning, but I was a bit worried about how they’d feel on the run.

With regard to fit, my initial impression was that they were a pretty snug shoe – not a lot of room up front, and not much vertical volume to the upper from top to bottom. I definitely felt a bit of a squeeze. However, much like I found with the Pure Grit, the manufacturer provided insole in the Cadence 2 was both thick and quite soft (5.5mm forefoot and heel). Swapping it out for a 1.7mm Skechers GoBionic insole increased volume by almost 4mm, which proved to be enough to make the shoe go from snug to plenty roomy (Skechers really needs to sell those things independently of the shoes for a few bucks!). The PureCadence 2 still does not have a wide forefoot by any means, but it’s sufficiently spacious for my medium width feet.

The upper of the Pure Cadence 2 is pretty highly structured – there is a prominent, hard heel counter, numerous overlays, and the fabric upper feels thick and plenty durable. The ankle collar is plush and cushioned, and interior fit and finish is great. As mentioned above, the included sockliner is thick and cushy, and it has a prominent arch support (this is reduced significantly by swapping out the insole.

Since the sole is unchanged from the original PureCadence, the dimensions should be the same at 22mm heel, 17mm forefoot. My size 10’s weigh in at about 9.5oz on my scale, so comparable to something like the Brooks Launch. The outsole is extensive (see photo below), and I expect that durability will be good.

I took the shoe out today for an easy 10K on the roads around my house – this was my first run in the shoes, so keep in mind that this is merely my first reaction (though as I have said before my first impression typically holds on future runs now that I’ve run in so many shoes).

Whereas the shoe felt really soft for standing and walking, it felt considerably firmer on the run – this might simply be because I tend to be a midfoot striker and the heel feels softer than the rest of the sole to me. It could also be that it was pretty cold out today, and soles tend to feel firmer in cold temperatures. I didn’t feel as noticeable a springiness in the sole as compared to the Brooks PureFlow, but again that could be due to the temp. The midsole of the PureCadence is composed of a mixture of BioMogo foam and Brooks DNA compound – the latter is supposed to adapt to the amount of force applied, and that may explain why the shoe felt firmer while running than in lower impact activities.

Let’s address a few of the “technologies” present in the PureCadence 2. I like to be honest in my reviews and not pull any punches, so here goes. One of my issues with Brooks, as well as with several other shoe companies, is that they tend to overhype technology. The PureProject is Brooks’ “feel-more-with-less” line of running shoes, but they seem to have a need to market the heck out of the so-called technology in the PureProject shoes.

I’m not the only one that feels this way – here’s what John Schrup at Rogue Running had to say about the impending demise of the Brooks Launch (a shoe that holds a special spot in my own running history):

“When it was announced that the Launch was to be discontinued, well, I don’t want to call it chaos, but s*** was ****ed up.  Women in the streets rending their Lululemon.  I know!  Seriously!  Mass jaywalking…Texas became the first state to make veganism the official religion.  Like I just said, s*** was ****ed up!  The design of the Launch reminds us of days before people missed workouts because their Garmin wasn’t charged; before people took gels on a 5 mile run; before people gave a s*** about over-pronation.  At the same time, the Launch are what most minimalist… err biomechanically appropriate… shoes should be, albeit maybe with a higher offset.  But you know what we’re talking about.  They’re foam, with complete ground contact.  Brooks, the number one brand at running specialty now, are dropping the Launch from their lineup, because Brooks believe that you can’t make a good running shoe without actually ****ing it up first, er, I mean adding a bunch of technology to it.” 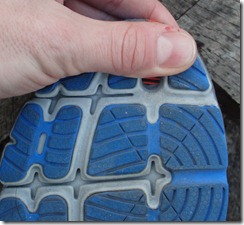 The Brooks Launch was a great shoe because it was simple. The Brooks Flow, Grit, and Cadence are great shoes that I suspect are selling like crazy, and it’s not because of the “Nav Band” or the split toe. Quite frankly, I’m not convinced that either of these “technologies” do anything. The split toe doesn’t extend far enough back to be functional – if you follow the thumb-width in front of your longest toe method of fitting shoes (which I do), then very little of the big toe actually extends beyond the beginning of the split (see photo at left). What’s more, the split isn’t all that flexible to begin with (check out Eric Orton’s B2R shoes for a better implementation of a Tabi-style shoe design).

As for the Nav Band (the orange and black band over the midfoot seen in the photos), it’s a prominent “feature” of the Pureproject shoes, but it seems pretty redundant since the shoes have another (fairly effective) foot holding technology known as “laces.” I have yet to feel like the Nav Band on any of the PureProject shoes accomplishes much of anything, though I suppose if my laces came undone and fell off the shoes mid-run, the Nav Band might come in handy. 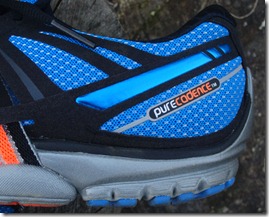 The one technology on the PureProject shoes that I do like a lot is the Ideal Heel, which Brooks refers to as an inverted heel, and others sometimes refer to as an undercut heel (see photo at right). The Ideal Heel removes the posterior flare found on the back of the sole of so many shoes, and moves the back edge of the heel to a level in front of the heel counter. I do feel like this will help shift the foot strike forward a bit for heel strikers, and it will reduce the lever arm that powers the foot-slap in a heel-striking runner (might help those prone to anterior shin splints). The inverted heel gives the shoes an almost Skechers GoRun like feel while standing – you tend to tip a bit backward if you shift weight posteriorly while standing in the shoes.

Despite my above complaints about the overhyped technology in these shoes, I finished my run today with a very positive opinion of the PureCadence 2. Because it’s heavily cushioned, it’s not a shoe for those wanting a barefoot-style feel. But, for those happy in the transitional zone, or looking to move down to less shoe from a traditional stability trainer, this would be a pretty mild step that accomplishes a lower drop and a nicely designed heel geometry. One note on the stability aspect of this shoe – I can’t honestly say that it feels any more stable than the Pure Flow, so I wouldn’t necessarily let that be a deciding factor in choosing between those two shoes.

I’m quite sure that the Pure Cadence 2 will sell very well for Brooks. It’s a great looking shoe, and has great step-in comfort for those wanting an ultra-cush feel underfoot. A further plus is that it actually sheds that somewhat excessive cushiness a bit on the run and provides a reasonably firm base of support. It’s a shoe that will work for any distance, and could easily handle a marathon if that’s your goal. It’s also a shoe that offers a fairly mild entry into the minimalist end of the running shoe spectrum – this is one you can move into without having to worry about shedding your cushioning too quickly. However, with the cushioning comes a lack of ground feel, so it’s far from a barefoot-style shoe.

In my opinion, shoes like the PureCadence 2 and Saucony Mirage are likely the future “center” of the running shoe spectrum. Lightweight, moderate drop, and plenty of cushion. It’s a pretty safe place for a beginner to start, and then add or subtract shoe as needed or desired. It’s definitely a shoe to consider in the transitional range.