Brooks Pure Connect: Too Narrow for My Feet

**Update: I have now posted a guest review of the new Brooks PureConnect 2. The upper of the update apparently allows a bit more give than the shoe described in this post.

After much fanfare and anticipation, Brooks finally released its Pure Project line of running shoes last month. Brooks has been careful to avoid calling them minimalist (Brooks CEO Jim Weber has openly mocked the minimalist movement), but I say let’s call a spade a spade and state clearly that this is Brooks’ answer to the minimalist running phenomenon. The Pure Project was released to compete with the Saucony Kinvara/Mirage/Cortana/Peregrine and New Balance Minimus shoes, and whether they’ll admit it openly or not, these shoes are their attempt to make a Brooks branded line of “natural running” shoes.

Despite my problems with the initial marketing approach that Brooks took with these shoes, I was quick to put in a pre-order for the Brooks Pure Connect because I knew that the line would be popular. I am a shoe reviewer after all and I knew I’d get a ton of questions about these shoes. What’s more, the shoes look really nice, and I’ve had good personal experiences with Brooks shoes in the past (e.g., the Launch was a favorite in a previous phase of my running life). The Connect was billed as the most “minimal” of the Pure Project shoes, so they seemed like the obvious choice for me. The Connects arrived in the mail a few weeks early, and I was excited to take them out for a spin – until I put them on my feet.

There are only a few deal breakers that would prompt me to return a pair of shoes that I’ve purchased without running in them. Number one among those is a toebox that is too narrow (excessive heel lift is another, but that is more easily screened before purchasing). I can only recall three pairs of shoes that I have returned due to narrowness, and they are the Nike Waffle Racer, Saucony Shay, and now the Brooks Pure Connect. I’m quite surprised by the latter since Brooks designed the Connect to be the “maximal feel” shoe of their Pure Project lineup, and thus the shoe most likely to appeal to minimalist aficionados. Well, the only feel I was able to get from the Connect was the feel of my metatarsals being squeezed together and the sides of my feet hanging over the sole of the shoe. Standing on a shoe where the sole is narrower than your foot leads to a strong feeling of medio-lateral instability, and I just couldn’t justify swallowing the money I shelled out for these shoes to go for a run in them. I knew immediately that these were a no-go, and I’m left befuddled by what Brooks was thinking. I don’t by any means have a wide foot – the Saucony Kinvara fits fine on me – but the Connects were as narrow as any racing flat or XC shoe that I have worn. 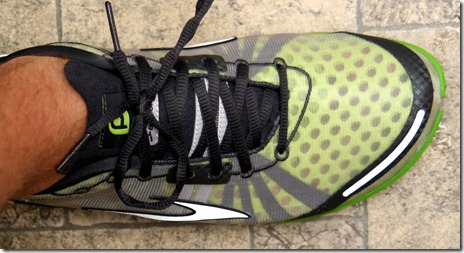 The Brooks Pure Connect – notice how you can only see the bright green sole up near the toes. These shoes are narrow, and my feet were bulging out on both sides!

The other strange feeling in the Connect is under the arch. Instead of gently sloping from heel down to forefoot, it feels like Brooks put all of the 4mm drop right under the midfoot, and the result is a feeling of “arch support” that is more pronounced than in almost any other shoe that I own. This would not be a deal breaker for me as it feels a bit like the raised midfoot of the Skechers Go Run (though more localized to the arch side), and I learned from that shoe that what feels weird while standing might feel fine out on the road (I should note that I don’t think running with the insole removed is an option due to the way the shoe is constructed – it’s hard to explain in words). Also like the Go Run, the heel of the Connect feels extremely soft, and I suspect the combination of midfoot contour and soft heel would make these shoes quite good at encouraging a mifoot strike. However, I think the Skechers shoe is the better of the two if for no other reason than it has a fairly roomy fit and less going on under the arch.

Insole of the Brooks Pure Connect – note the rather extreme contour in the midfoot region. 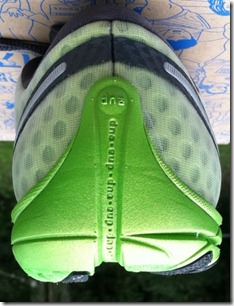 The sole of the Connect is unusual in that the lateral forefoot and medial heel extend down further than the medial forefoot and lateral heel. You can see what I’m talking about in the photo to the left – notice the difference between how far the sole extends downward on the two sides. Once again, this is not a deal breaker for me, and I would have liked to have seen how this feels out on the road.

A couple of final observations. Brooks advertised these shoes as having 4 special technologies. One of these was the split sole between the big toe and the rest of the foot (see sole photo below). My take is that this feature is gimmicky and non-functional. First and foremost, the sole above the split (the lighter green area in the photo below) is rigid and little to no flex would seem possible. Second, the split is connected by midsole material only a few centimeters from the front of the shoe. For a split toe to really work, it needs to create greater independence for the big toe like that in the Vivobarefoot Achilles or in a tabi-style shoe (or the Vibram Fivefingers) – the trade-off is then that the shoes start to look weird. It’s also worth mentioning that Brooks’ conception of a shoe that allows you to “feel” the road is very different from mine. When I think “feel” I think Merrell Barefoot or Vibram Fivefingers. The Connect is pretty cushy, though I suppose if you are coming down from a more traditionally cushioned shoe it might have more feel to it. I’ve also heard that it feels firm on the run than when standing in them, but I can’t comment on that.

I’ll end by saying that although I was disappointed by the Connect, it may be a fine shoe if you have a narrow foot (e.g., check out this review by my narrow-footed buddy Thomas over at Believe in the Run). After returning the shoe, I solicited some feedback from some on-line friends and from the Brooks rep on Twitter was told that the Flow had a wider toebox and might be more to my liking. I recently picked up a pair of those, and last weekend ran a solo half-marathon in them – a first-impressions review will becoming soon, and for now all that I’ll say is that I am rather impressed by the shoe. So, my advice to you is if you want to try out the Pure Project and have a medium to wide foot, skip the Connect and opt for the Flow – it’s a much better fit and will likely be a strong competitor to the Saucony Kinvara.

**Update: I have now posted a guest review of the new Brooks PureConnect 2. The upper of the update apparently allows a bit more give than the shoe described in this post.

You just finished reading Brooks Pure Connect: Too Narrow for My Feet! Consider leaving a comment!