When Brooks first announced its Pure Project line of more minimalist footwear, I was initially most curious about the Connect, which was supposedly the most stripped down of the models in the Pure Project lineup. Unfortunately, I found the Connect to be both too narrow, and the contour of the sole underfoot was just a bit too much for my taste. So, the Connects were sent back and I headed over to my local mall and picked up a pair of the Brooks Pure Flow instead. A number of folks on Twitter had indicated to me that the Flow had a wider fit, and thus it would more likely meet my needs.

I’ve now had the Flows for over a month, and have run a decent number of miles in them, including several 10+ mile runs. For me, a shoe like the Flow is a long run shoe in a similar category to the Saucony Kinvara, which is probably its most direct competitor. It’s a well cushioned shoe, and though lightweight compared to most traditional running shoes, it’s at the upper end of my tolerance at 9.4 oz in size 10 (measure on my postal scale). Thus, it’s a bit more shoe than the Kinvara, and thus the more appropriate comparison might be to the Saucony Mirage (the latter is classified as a mild stability shoe, but I hardly notice) – both the Mirage and the Flow have more substantial uppers in comparison to the Kinvara.

In terms of appearance, bright, almost neon green is an atypical color for a running shoe, but I like bright colors in general, so this shoe appeals to me. The silvery sole pairs well with the upper to make for an overall fine looking shoe.

My biggest concern about this shoe was whether the fit would be wide enough. Thankfully, the forefoot is indeed wider than that of the Connect, and by a considerable amount – my foot doesn’t hang off the sole of the Flow on the sides. That being said, this is by no means a wide shoe, but it fits comfortably on my foot, and I don’t feel any oppressive squeezing of my metatarsals and toes as I did in the Connects. I’d compare the fit to that of the Kinvara – if you have wide feet this is not the shoe for you, but an average width foot should do just fine.

The interior of the Flow is well-finished and comfortable. I particularly like the inner liner of the heel region – soft and non-abrasive. There is noticeable arch support, which will turn a lot of more minimalist folks off, and the feel under the forefoot is on the soft side. This is most definitely a transitional shoe and not a barefoot-style shoe.

The sole of the Flow is rather unique. On my first run in them I immediately noticed that it had a very springy feel to it. It’s not firm, and it’s not overly mushy – rather, it almost has a bouncy feel. Others have commented on this to me as well, but have indicated that the bounciness tends to subside with increased mileage on the shoe. The sole is composed o a mix of Brooks’ DNA and Biomogo compounds, and the combination seems to work very well – I do feel like this sole gives a bit of return with each step. The heel-forefoot offset in the Flow is 4mm, which is right in my sweet spot for a long run shoe. One area that the Flow does have an advantage over a shoe like the Kinvara is in expected durability – it has a much more prominent rubber outsole, and should not wear down as fast as the exposed EVA foam on the Kinvara. 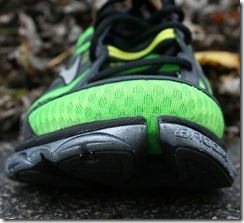 Brooks has incorporated 4 “technologies” into each of the shoes in the Pure Project lineup as part of their “do more with less” philosophy. My feeling is that most of these are gimmicky and basically non-functional. The nav-band that wraps over the midfoot seems redundant in a shoe with laces, and I can’t honestly say that I feel any benefit from it. My sense is that the split toe (see photo at left and above) is completely non-functional – the sole above it is rather rigid, and the split doe not extend nearly far enough back to allow any independence of the big toe (a more functional, though weird-looking, split toe can be found on the Vivobarefoot Achilles sandal). I can’t even independently flex the big toe piece with my hands, so not sure what the purpose is. The anatomical shape is not nearly as anatomical as shoes like the Altra, Merrell Barefoot, Vivobarefoot, or New Balance Minimus, but is wide enough for my feet. Finally, the one “technology” that I do like is the “ideal heel” (see rounded heel in photo below). I find that an undercut heel like that on the Brooks Flow, New Balance Minimus, and Skechers Go Run does allow for a more forward landing on the sole. So Brooks is batting only .250 on its so-called “technology” on my scorecard, but at least the one hit was a solid one. 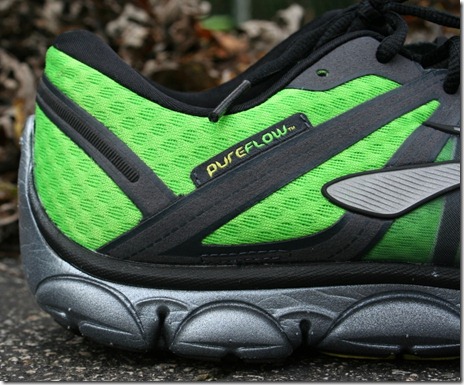 In terms of performance, the Brooks Flow has served me well out on the road so far. I ran a sub-1:35 half-marathon in them (it was a training run, not a race), and my feet and legs felt great afterward. The springiness of the sole is quite pleasant, and I have yet to develop any hot spots from running in the shoe. I suspect that they would work well as a sockless running shoe, but I have yet to attempt this myself.

In summary, whereas Brooks failed in my opinion with the Connect, they have created a solid shoe in the Flow. This shoe is an excellent alternative for those running in the Saucony Mirage or Kinvara, though it is a bit more shoe than the latter which would probably lead me to still choose the Kinvara for a marathon length race. For me, the Flows are a training shoe for mid-distance to long runs, and they fill that niche quite nicely.