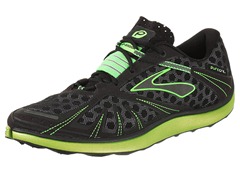 The lightweight trail running shoe category has been exploding with good options lately, and over the past month or so I’ve done a fair amount of my running in Brooks’ first contribution to this niche: the Brooks Pure Grit (8.9 oz in size 9). The Grit belongs to the Brooks Pure Project suite of shoes, which is Brooks’ line of transitional-minimalist running footwear. I’ve previously commented on the Pure Connect, which I had to send back since it was too narrow, and the Pure Flow, which is one of my top picks as a long-distance road shoe.

For awhile I’d been hearing from people that the Grit was a really nice lightweight trail shoe. My buddy Nate Sanel wrote a highly favorable review of the Grits, and he’s worn it for at least a portion of several 100 mile races. Here’s what Nate had to say:

“If I could only have one pair of shoes (God forbid) these would probably be the ones.  They have enough cushioning to run 40 miles of roads.  They have enough protection to run rocky trails.  They drain well enough to run in mud and muck all day and they allow for and encourage a midfoot stride.

I’d really like to see this shoe have less (or none) arch support and a more rounded toebox.  For now, those few flaws aren’t enough to keep my feet out of them.”

Nate and I have fairly similar taste in shoes, so I decided to give the Grit a shot myself (these shoes were a personal purchase, not media samples).

My first impression when putting on the Grits was that Nate was right – the fit was a tad tight and the arch support was very prominent. But, as I usually do with any new shoe, I pulled out and inspected the included footbed and found that it was fairly thick – 5.5mm to be exact! It also had a fairly prominent contour under the arch. As I so often do these days, I swapped in the insole from the Skechers Go Bionic (1.7 mm thick and completely flat) and the fit improved dramatically to the point where the forefoot felt more than spacious enough for my taste, and the arch contour was markedly reduced (Note: I’ve also used the Adidas Hagio insole in the Grits – it adds another millimeter of cushion over the Skechers insole and snugs the fit up just a bit. It also stays in place a bit better inside the shoe). With the insole taken care of, the Grits feel awesome on my feet – super comfortable and no squeezing at all.

The upper of the Grits is substantial, but it seems to breathe and drain pretty well. The ankle collar is well cushioned and very comfortable, and the interior lining has no issues with seam hot-spots or anything like that. There is a fairly rigid heel counter, but this typically does not bother me. One thing to note about the interior is that I do seem to get a hot spot along the margin of the ball behind my big toe on my right foot. This is a problem I have in shoes from time to time, and it’s usually on the right side only – my guess is that it’s a subtle form issue or something to do with the shape of my foot, so probably not something that is necessarily a problem with the shoe. Could also be due to the increased space created by swapping out the original footbed. Final note on the upper – the Nav-Band (bright green strap across the laces in the above photo) is loose and completely non-functional – I’m tempted to just cut it off. 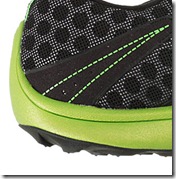 What I liked most about the Brooks Pure Flow, and what I like best about the Grit, is the BioMoGo/DNA foam midsole. Running Warehouse reports stack height of the sole of the Grit as 21mm heel, 16mm forefoot (feels less than 5mm drop to me though). The sole has a nice springy feel to it – not too soft and not too firm. It runs really well on both trails and roads.

One interesting thing about the sole of this shoe is that it feels slightly rockered – the heel is undercut and sculpted up (see photo above-left) making this a great shoe for midfoot-forefoot strikers. I’m a big fan of the heel geometry on the Pure Project shoes, and wish more shoes would adopt the undercut design. It’s worth noting that Brooks designed the sole with a split toe (see below) – this doesn’t feel particularly functional to me since the split doesn’t extend back far enough to allow much independent movement of the big toe.

The outsole of the Brooks Grit is full-length and substantial – rubber covers almost the entire bottom of the shoe, so durability can be expected to be good. The lugs are not terribly prominent, which makes this a nice hybrid shoe as you barely notice them when running on roads. My one and only major complaint about this shoe is that the outsole performs very poorly on wet, smooth surfaces. I wore the Grit on a 12 mile trail run with Nate, and he referred to them as the Brooks Pure Slip. I found this out the hard way on my first run in the shoes – I was crossing a stream and stepped on a wet rock. I immediately lost my footing and wedged my ankle between two rocks – suffered a gash to my ankle and tore the shoe upper in two spots. I’ve since realized that slipping is also a problem on wet wooden bridges – I was running along the Stowe (VT) BIke Path in the rain and every time I hit one of the footbridges it was like running onto a patch of ice. Traction does seem fine on dry surfaces though, and judging by the number of runners I saw wearing them at the Vermont 100 a few weeks back, those who put in a lot more trail miles than I seem to think they’re up to the task.

If I had to choose my top pick in the lightweight trail category right now, the Brooks Grit would definitely be a contender (along with the Merrell Mix Master 2). Competition in the category continues to heat up though, with shoes like the Saucony Kinvara TR and Inov-8 Trailroc 245 just hitting the market. But if you’re looking for a shoe that handles both trails and roads well, that has a responsive, springy sole, and that has a roomy fit (if you swap out the insole), the Brooks Pure Grit is a great choice.

The Brooks Pure Grit is available at Running Warehouse, Sun and Ski Sports, and in some additional vivid color schemes at Zappos.