Becki Pierotti is a competitive distance runner who currently runs for the National Running Center in Clarks Summit, PA. She has PR’s of 18:30 in the 5K, 1:25:07 in the half marathon, and 3:02:30 in the marathon – in other words, she’s crazy fast!

Becki is also currently a grad student at a chiropractic college. She has an interest in the causes and treatment of running injuries, and is a bit of a shoe geek. Much like me, she likes to write long, in-depth reviews of shoes on her blog The Middle Miles, and thus I thought she’d be a great fit for a guest review here on Runblogger. Given that the Brooks PureConnect was too narrow for me to wear comfortably, I asked her if she’d be willing to review it for me, and she happily obliged.

The PureConnect 2 is Brooks’ second most stripped-down shoe of its PureProject collection. It uses the same midsole and outsole as the original, so those of you who have worn the original PureConnect know exactly what to expect. The PureConnect 2 has a 4mm heel-toe differential and weighs in at 7.2oz for a men’s size 9 and 5.9oz for a women’s size 8.

The biggest change from the original PureConnect is the move to a burrito-style upper with asymmetrical lacing, reminiscent of the upper of the discontinued Green Silence. The new upper is made of a mesh material and has a bit more “give” than the original. It’s still built on the same curved and narrow last as the first PureConnect, but a little bit more give in the upper means that someone who found the first PureConnect just a touch too narrow may be able to stretch the upper of the 2. However, make no mistake, this is still a narrow shoe, particularly when compared to the other PureProject shoes. It also seems to breathe better than the original, and is comfortable with or without socks. Ultimately, I feel the new upper is definitely an improvement.

For those of you who haven’t worn the first PureConnect, the first thing you’ll likely notice upon putting on the PureConnect 2 are the “bubbles” on the sole. There’s a definite feeling of awkward instability when standing in these shoes (I described the original as what I’d expect Reebok toner shoes to feel like), but this feeling almost disappears when running. Just don’t look for ground-feel, because due to the construction of the bubble-like pods on the sole, there’s not much there.

For a 7oz shoe, the PureConnect 2 has quite a bit of cushioning. It’s a surprisingly soft and plush ride, moreso than any of Brooks’ racing flats (though obviously it’s firmer than say, the Launch or PureFlow). Since the entire midsole is a combination of Brooks’ BioMoGo (the normal midsole material in Brooks’ shoes) and DNA (Brooks’ proprietary extra cushioning element that’s usually embedded as a full-length pod or a separate heel and forefoot pocket in their midsole), there’s no weird “pockets” that you sometimes notice in shoes that do use a bunch of random cushioning elements, making for a very smooth ride. It’s also a nicely responsive shoe with a fairly quick transition (though not as quick as most of the stiffer racing flats I’ve worn). I’ve used this shoe and its predecessor for more speed workouts than I care to count, though I do tend to prefer an actual racing flat for racing and for fast track work. 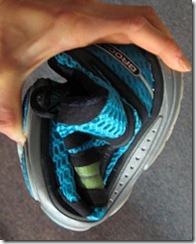 The PureConnect 2 has a nice amount of flexibility, both through the forefoot and torsionally. It’s not as flexible as the new PureDrift, nor is it as flexible as most of the shoes from dedicated minimalist companies, but I’d be surprised if the average person who’s used to regular trainers or other “transitional” shoes will have a problem with its flexibility. It does, however, have a sprung toe, if this is a concern for you.

The PureConnect 2 has very prominent arch support for a reduced shoe. Some of this comes from the construction of the midsole itself, and some comes from the shape of the insole. I’ve heard of some people replacing the insole with the insole from another shoe (though it would most likely need to be cut down to fit the PureConnect 2’s narrow last), but due to exposed seams under the insole, it’s probably not a shoe you’ll want to run in sans insole. 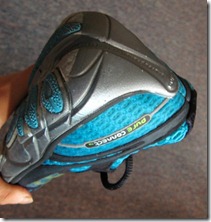 The heel counter on the PureConnect 2 is stiff and hugs my calcaneus well, but it’s also a bit on the high side, so there’s a possibility of ripping up the skin over your Achilles if you’re susceptible to that problem. The firm heel counter also seems to add a little bit of rearfoot support to the shoe. Like the other shoes in the PureProject collection, the PureConnect 2 has an undercut heel (Brooks calls this IDEAL Technology) which is meant to mimic the shape of your calcaneus and move the initial contact point forward slightly. It’s not something I really noticed one way or the other, but many people seem to like it. 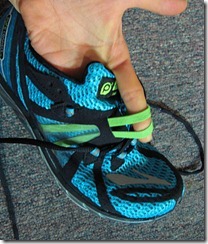 Along with the IDEAL Technology in the heel, the PureConnect 2 also uses the Nav Band and split toe technology that are common among the PureProject line. I liked the elastic Nav Band on the original PureConnect, as I felt that it helped the upper hug my foot. However, the single Nav Band of the original has been replaced by two mini Nav Bands, and I really don’t feel that it does much anymore. The split toe was never really something I noticed, since the big toe does not flex separately from the other toes, and it doesn’t seem to do much other than to create space in the sole to pick up rocks.

The PureConnect 2 is a road shoe with good traction on the road. However, mud traction is non-existent. Additionally, it’s really not that great on trails due to the inherent instability created by the configuration of the bubbles on the sole and the rock magnet that is the split toe.

Durability of the PureConnect 2 is interesting. There is no outsole rubber on the lateral toe (instead, there is just exposed midsole foam), so this area tends to get worn down very quickly. I’ll see noticeable wear within the first 20 miles, and by 200 miles, the lateral toe pod is all but gone. However, the ride doesn’t degrade as much as I expected, and I seem to be able to get around 400 miles per pair before they get that dead, worn-out shoe feeling. It’s still less miles than I get on the Launch, but better than I had assumed when I saw the condition of the shoe early on. I’d still like to see contact rubber on the lateral toe of the PureConnect 3 though.

As mentioned before, the PureConnect 2 is a narrow shoe, though the upper is stretchier than that of the original. It’s built off of a narrow platform and has a narrow, curved last. The width is similar to that of the T7 Racer. Additionally, the instep is on the low side, which may be a concern for people with high volume feet or very high arches.

The Brooks PureConnect 2 is easily my favorite of the PureProject shoes I’ve worn (though I have not worn the PureGrit). It’s not really a minimal shoe, thanks to the ample cushioning and prominent arch support, but it is a nice lightweight shoe with a smooth transition, plenty of cushion, and a good response. It’s a versatile shoe that I’ve found works well for everything from easy runs to tempo-paced speedwork. While I’m…unhappy…about stockpiling several pairs of the ugly color Launch just to find out they’re bringing back one of the nicer color schemes, I am glad that I had a reason to revisit the PureConnect, and I’m satisfied with the changes to the upper that Brooks made to the second iteration of the shoe.

Full disclosure: The pair of PureConnect 2 in these photos is a pair that I won in Brooks’ PureProject on the Run contest, but I’ve also bought a few of the originals, as well as a pair of the PureConnect 2 before I found out that I won the contest.

You can read my other Brooks PureProject shoe reviews on my blog, The Middle Miles: Brooks PureFlow 1, Brooks PureConnect 1, and Brooks PureDrift.

The Brooks PureConnect 2 is available for sale at Running Warehouse (men’s, women’s)