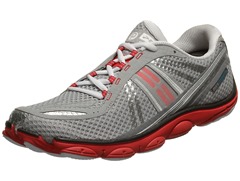 When Brooks first announced their PureProject line of shoes back in 2011, I expected that the PureConnect would be my favorite shoe in the collection. It was the lightest of the bunch, and was billed as the maximal “feel” shoe among it’s PureProject brethren.

I ordered a pair of the original PureConnects as soon as they were available, but the moment I tried them on I knew they weren’t going to work. The shoes were narrow to the point that my foot spilled over the sole on both sides. And the insoles had a crazy amount of contour/arch support built into them. Both were deal breakers. Since I had purchased the shoes myself I decided not to run in them. I returned them and picked up the original PureFlow instead (which I liked a lot, just got a pair of the PureFlow 3’s for review).

Because of my initial experience with the Connect, I opted to pass on version 2 since the sole had not changed (Becki Pierotti reviewed them for me here). A few weeks ago Brooks contacted me about the launch of PureProject v3, and asked if I’d be interested in reviewing any of the shoes in the collection. I’d heard that the PureConnect 3 had undergone a substantial update (Becki also reviewed the PureConnect 3 on her own site), including the sole, and that it had a bit more room up front. I decided to give it a try (Disclosure: these shoes were free media samples provided by Brooks Running).

Let’s start this review by addressing my two big problems with the original PureConnects:

Given how narrow the original Connects were, I opted to try a 10.5 in the PC3 rather than my usual 10 in Brooks shoes. I think it was the right choice. The shoe definitely feels wider than the original PureConnect (I can actually wear them this time), but it’s by no means roomy. Think of it as a performance fit, similar to that of a typical racing flat.

The problem I have with the PC3 is that the shape of the toebox remains a bit odd. It fits, I can run in it comfortably, but it’s still kind of rectangular. My guess is that this would be a great fitting shoe on someone with a long, narrow foot, but on me it it’s just not quite right, and I think if I sized down my toes would be a bit scrunched. I’d love to see this shoe on the same last as the Flow or Cadence.

Another positive about the PC3 is that although it is still prominent, the arch contour seems to be toned down a bit. Either that or the wider fit or sizing up makes it less noticeable. I’ve never been one to complain too much about arch support, and I’ve had no issue with this shoe over 30 miles or so of running. That being said, if you don’t like arch support, then this shoe is not for you.

Some thoughts/observations on the upper of the PureConnect 3

The sole is really what makes this shoe. First the specs:

For comparative purposes, here are specs for the Brooks PureFlow 3 and Saucony Kinvara 4:

So the Connect is slightly lighter and lower-profile than both the Flow and Kinvara. Personally, I’d probably compare it more directly to the Kinvara since the Flow has a bit more of a substantial feel to it (less “performancy” if that’s a word).

I’m very skeptical of marketing and shoe tech in general, but I really think Brooks has something unique in the Biomogo DNA midsole used in the PureProject shoes. Brooks describes their DNA material as follows:

“Brooks DNA automatically and physically adapts with each foot strike to the ever-changing amount of force placed on the foot during the run.”

The sensation I get running in these shoes does seem to agree with this. While walking in the shoes the sole has a soft, spongy feel to it, but once you start running it feels far more responsive. Cushioned yet responsive perhaps. I like it, and I’d love to see a Biomogo DNA sole in a 5-6oz, 4mm drop racing flat.

Given the properties of the sole, the Connect is a very versatile shoe. It’s light and responsive enough to use for speed, and it’s cushioned enough to use for distance (if your foot can handle the fit over double-digit miles). Very impressed by the sole of this shoe.

A few additional observations on the sole: 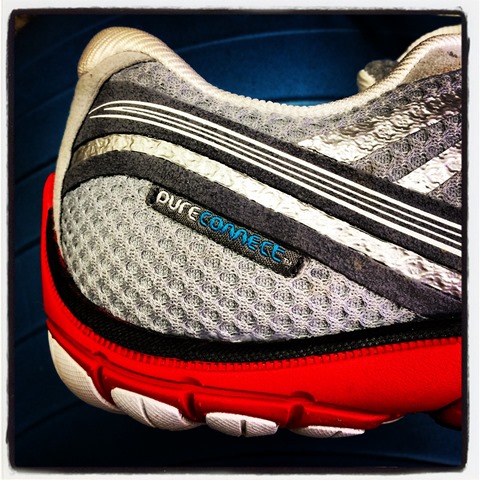 This shoe frustrates me a bit. I love the ride, and could easily see using it as a marathon shoe given it’s cushioning and responsiveness, but the fit is just not quite right for my feet. Fit is such an individual thing though, and if you go to the Brooks page for the PureConnect 3 you’ll find people trashing the shoe because they widened it a bit. Any change will please some and anger others. If you have a narrowish foot and like lightweight, low-drop shoes, the Brooks PureConnect 3 would be an excellent shoe to try.

I’d love to see Brooks make a new shoe in the line that incorporates the Biomogo DNA sole, strips off an ounce or two (perhaps by removing just a bit of the rubber from the sole in less wear-prone areas, eliminating the Nav Band, reducing the size of the heel counter, and simplifying the upper), and is on the PureFlow last. Call it the Brooks PureRacer and I’d be first in line to buy a pair.

The Brooks PureConnect 3 is available for purchase at Running Warehouse, Zappos, and Amazon.com.