I was just alerted yesterday to a new post on the Brooks Running blog where they announced their plans to jump into the minimalist shoe market with a collection called the PureProject (thanks @ZakBranigan!). The Brooks post is an interesting one, and I actually find their approach to be positive in a number of ways. In the post, one of the shoe designers at Brooks talks about how they did extensive consumer research to get a feeling for what “new runners” want when it comes to shoes. Not exactly sure why they only talked to new runners, especially since they are least likely to know what they really want in a shoe given their lack of experience, but that was their approach.

Based on this consumer research (my personal preference would have been extensive biomechanical research, but one hopes that has been done as well), they reported a number of findings. Among these were the fact that runners get confused by too much technology in a shoe, that runners often don’t understand what happens when their gait is analyzed in order to assist in selection of shoes (don’t get me started on the whole pronation control paradigm…), that less shoe should not cost more money (let’s hope they stick to this campaign promise!), and that runners are variable and want more choice when it comes to shoes.

The last point is where I applaud the Brooks approach. They discuss the fact that some runners like to connect to their surroundings on the run, and feel the ground under their feet via a very minimal shoe. Other runners like to float along, disconnected from the ground with billowy cushion underfoot and headphones in their ears. Brooks admits that they have not provided for the “Feel” crowd in the past with their shoes – the closest they come would be the Mach series of cross country flats. They view their “core” lineup, including shoes like the Adrenaline, Launch, Glycerine, Ghost, etc. as the “Float” group (see graph below with the Float-Feel axes). I have worn several of these regularly in the past, and Float is a pretty good description – very little in the way of ground feel. The New Pure Project shoe will be the “Feel” group – for what I think is a picture of one of the Brooks Pure shoes, check out this post by my friend Tuck. 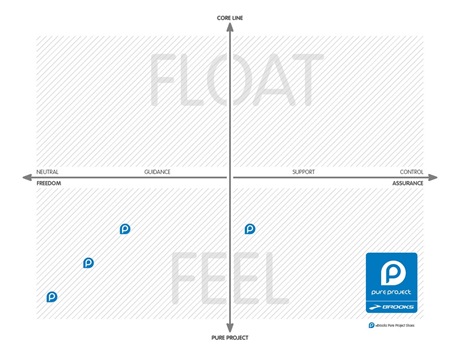 Float-Feel Axes Depicting the Location of the Brooks Pure Project Shoes. Image from the Brooks Running Blog. Based on this, looks like the new shoes will be neutral and emphasize ground feel. Can’t wait to see what the one indicated by the icon on the bottom left is!

Brooks also points out that some runners like to vary things from run to run – I am in this camp. Some days I like nothing more than to throw on my Vibrams and have a blast out on the road, whereas sometimes I enjoy the soft cushion of a shoe like the Saucony Kinvara. In this sense, I view this Float-Feel terminology as a fairly accurate and useful set of descriptors. I also have no problem with Brooks retaining the traditional axis – some people prefer it and that’s fine, though I personally don’t view the pronation control axis as primary, especially if one learns to run with better form. What I like about the Brooks approach overall is simply the recognition that we need more variety. Every runner has the ability to find out what works best for them, and what is best will never be the same for every single runner.

Permit me to be snarky for a second – one section I found a bit humorous was this:

“PureProject is a new line of footwear that promotes a natural ride and a truly unique running experience in a lightweight package. We utilize a new proactive approach to biomechanics called Ideal. Ideal technology is built into the very geometry of these shoes. It was created to promote a runner’s ideal alignment by attempting to shift force application points to align force vectors, and then load internal structures to enhance performance and decrease the risk for injuries. With this incredibly unique product line, the shoes work together with the body to put runners back in the driver’s seat.”

So if PureProject “promotes a natural ride” that will “enhance performance and reduce the risk for injuries,” I’m wondering what they are comparing to? Is it compared to Brooks’ core product line? Do traditional Brooks shoes promote a more unnatural ride, reduce performance, and increase injury risk relative to the PureProject shoes that are in development? Just throwing it out there…feel free to share your thoughts in the comments

Anyway, it will be interesting to see what Brooks comes up with in the Pure Project lineup. I’ve heard rumors about these shoes for months, but this is the first official announcement directly from Brooks, and it looks like there will be five four shoes in the collection to start if we are to go by the symbols on the Float-Feel graph. I’m excited to see another company aiming to add variety to the shoe market, and this can only be a good thing for the running community as a whole. Competition breeds innovation, and it’s an exciting time to be a shoe geek!