A little over a year ago I wrote a few posts (here and here) detailing how my wife managed to overcome pain caused by a neuroma in her right foot by running in Hoka shoes. The Hokas seemed to do the trick pretty quickly, and I’ve since heard anecdotes from others who seem to have benefited from using Hokas to manage pain in the forefoot while running (I should point out that there are many potential causes of forefoot pain, not just neuromas).

In contrast to the above, one of the more frequently reported injuries in runners who try minimal shoes are metatarsal stress fractures (this is also largely anecdotal). I myself tend to get a generalized ache in my right forefoot when I run in Vibram Fivefingers, though this does not tend to happen in other minimal shoes.

I’m a believer that different shoes modify how forces during running are applied to the body, and if the anecdotal observations described above are in fact representative of more widespread patterns, it may be that Hokas reduce force application to the forefoot, whereas minimal shoes might increase force application to the forefoot. We do have some indirect evidence for the latter in the form of a study that showed increased bone marrow edema in the metatarsals of runners in Vibram Fivefingers relative to runners in more traditionally cushioned shoes. Furthermore, a study in press at the Journal of Science and Medicine in Sport compared plantar pressures between subjects running in minimal shoes (Merrell Pace Glove) vs. traditionally cushioned shoes, and reported the following results (I don’t have the full text of this study yet):

This study shows that peak pressures are considerably higher under the central and lateral forefoot in a minimal shoe even when a change in foot strike type is lacking. I’ve long suspected that forces during propulsion are more important than impact forces when it comes to metatarsal stress fractures, and these results may support this idea since a change in landing type was not observed in the minimal shoe (and most people tend to heel strike with shoes on).

I’ve long wondered which aspects of a shoe like those made by Hoka might benefit runners dealing with forefoot pain. Is it the thicker midsole cushioning? Is it the wide sole? Is it the rockered design of the sole? Something else? Well, we now have a bit of evidence that might start to clarify things.

The same group that published the above-mentioned study on minimal shoe also published a study this year in Gait & Posture in which they looked specifically at the effect of rocker-soled shoes on plantar pressures during running. Here is the Abstract:

In the study, the authors recruited 18 female subjects and had them run in a traditionally cushioned shoe as well as a modified version of the same shoe (see photo below). In the modified shoe, the sole was cut and a stiffened, 2.2 cm thick rocker element was added. This rocker moved the position of the sole rolling point (I’d call this the beginning of the toe spring) back a bit toward the midfoot (53% of shoe length vs. 65% in the normal shoe – see arrows in the photo below). A weakness of this study is that the addition of the rocker element made the rocker shoes much heavier than the unmodified shoes (over 150g heavier per shoe on average). The sole stack height was also considerably thicker in the rocker shoe (2.2 cm). 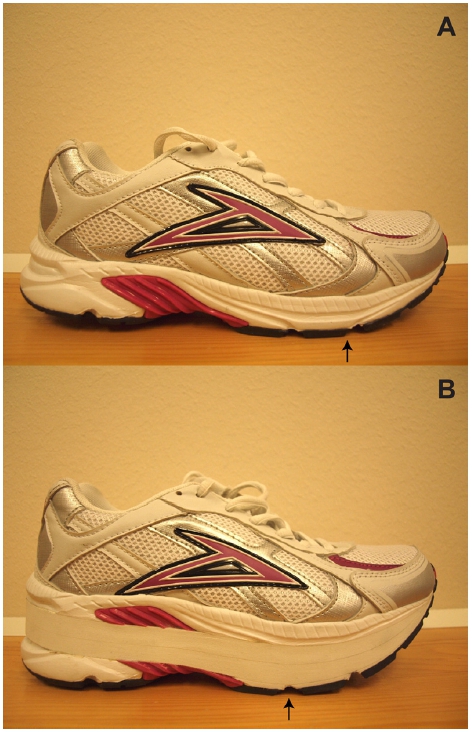 The subjects ran trials along a 22 m runway in each shoe, and plantar pressures were measured via pressure-sensing insoles installed in the shoes. They found that the rocker-sole shoe reduced peak underfoot pressure by 24% and 27% respectively in the central and lateral forefoot. Conversely, pressures under the heel increased considerably in the rocker shoes. This indicates once again that different shoes move forces around – the forefoot is offloaded in the rocker shoe, but load under the heel increases. The converse happens in the unmodified shoe.

Does this mean that everyone experiencing forefoot pain should run out and buy a pair of Hokas or the Altra Paradigm/Olympus (I believe Scott also makes rocker sole shoes with a lower profile)? Not exactly. The rocker shoe in this study was stiff and heavy (almost 15oz per shoe), not a Hoka, so it’s not necessarily possible to generalize the results. However, they do suggest that trying a shoe with a sole rocker might be worth a shot if you’re dealing with nagging forefoot pain.

A few final points that I’d like to make:

1. Pressure is not necessarily a bad thing as stress on bones is necessary to keep them strong. Reducing forces excessively might be detrimental to bone health in the long term through weakening just as increasing forces excessively can lead to fracture through accumulating microdamage. Our goal is not to remove forces, but in a case of injury reducing them for a period of time might be of benefit.

2. I’d really like to see a study comparing Hokas or one of the max cushioned Altra Shoes (which have a very pronounced rocker sensation) to a lower profile rocker shoe, as well as to a traditional shoe. Modified shoes are useful in studies like this, but you can’t buy the shoe they used so generalization to things available on the market is difficult.

3. What we need most are more clinical trials where people with a particular injury are placed in a specific type of shoe to see whether it alleviates pain/symptoms. For example, if you took a group of people with neuromas and put half in a Hoka and half in a traditional shoe for a period of time what would the outcome be?

How about you – if you’ve dealt with any form of forefoot pain, have you experienced benefit from any particular type of shoe?