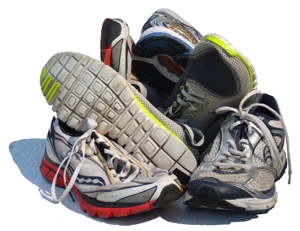 Shoe geeks rejoice! If you’ve been looking for a good reason to convince your spouse or significant other that you need a new pair of running shoes, look no further than a new study that suggests that runners who rotate among more than one pair of running shoes are significantly less likely to get injured than those who wear the same model of shoe on every run.

The abstract of the study arrived in my inbox a few days ago, and I do not yet have access to the full text, but Craig Payne at Running Research Junkie and Scott Douglas at Runner’s World have both covered it in some depth.

Abstract
The aim of this study was to determine if runners who use concomitantly different pairs of running shoes are at a lower risk of running-related injury (RRI). Recreational runners (n = 264) participated in this 22-week prospective follow-up and reported all information about their running session characteristics, other sport participation and injuries on a dedicated Internet platform. A RRI was defined as a physical pain or complaint located at the lower limbs or lower back region, sustained during or as a result of running practice and impeding planned running activity for at least 1 day. One-third of the participants (n = 87) experienced at least one RRI during the observation period. The adjusted Cox regression analysis revealed that the parallel use of more than one pair of running shoes was a protective factor [hazard ratio (HR) = 0.614; 95% confidence interval (CI) = 0.389-0.969], while previous injury was a risk factor (HR = 1.722; 95%CI = 1.114-2.661). Additionally, increased mean session distance (km; HR = 0.795; 95%CI = 0.725-0.872) and increased weekly volume of other sports (h/week; HR = 0.848; 95%CI = 0.732-0.982) were associated with lower RRI risk. Multiple shoe use and participation in other sports are strategies potentially leading to a variation of the load applied to the musculoskeletal system. They could be advised to recreational runners to prevent RRI.

I’ve long advocated rotating running shoes since I think that one of the major causes of repetitive overuse injury in runners is that many of us run on the same type of uniform surface (road/sidewalk) in the same model of shoe on every single run. In other words, we hammer ourselves in the same way every time we head out the door (trail runners excluded).

I believe that wearing shoes that vary in sole geometry and the amount of cushioning and support provided results in forces being applied to the body in different ways and thus reduces the overall repetitive load to individual tissues. This, in turn, reduces injury risk. I’ve employed a shoe rotation myself for several years now, though mine may be a bit larger than necessary given that I review them (perhaps to the point of actually being too big a rotation!). My thoughts on the benefits of rotating shoes until now were just a hunch based on knowledge of how footwear can alter mechanics and force application, but the study reported above seems to lend some scientific support to the practice.

In his article on the study, Scott Douglas reports the following regarding the researcher’s explanation for the mechanism behind the benefits of a shoe rotation:

“The researchers wrote that this could well be because different shoes distribute the impact forces of running differently, thereby lessening the strain on any given tissue. Previous research has shown, and runners have long intuitively felt, that factors such as midsole height and midsole firmness create differences in gait components such as stride length and ground reaction time.

As the researchers put it, ‘the concomitant use of different pairs of running shoes will provide alternation in the running pattern and vary external and active forces on the lower legs during running activity. Whether the reduced [injury] risk can be ascribed to alternation of different shoe characteristics, such as midsole densities, structures or geometries cannot be determined from these results and warrants future research.'”

This hypothesis is thus right in line with my own belief that mixing up force application is a plausible explanation for why a shoe rotation might reduce injury risk. However, we can’t confirm the mechanism for certain yet.

In any event, it’s nice when science supports a practice that I and many people I know have long advocated. It’s OK to experiment with footwear, and in fact it may be a good thing.