I’m often amazed by the degree to which we humans will put fashion before function when it comes to both our feet and our footwear.

A few days ago my friend Mark Cucuzzella forwarded me a link to an NPR article about the film adaptation of the book “Snow Flower and the Secret Fan.” In the article, film director Wayne Wang discusses the practice of foot binding, a horrific and disfiguring practice in which young girls’ feet were intentionally broken and bandaged in order to make them appear as small as possible (check out the x-ray above!). Wang makes an interesting comparison between foot binding and the modern wear of high-heeled shoes:

“Wang says footbinding was meant to establish and display social status. He elaborates that women with bound feet did not have to work in the fields, got carried around by other people, and were considered attractive by men.

Wang says that wearing high heels today is similar to having bound feet in the past because feet are packed into a tight shoe, and women who could afford heels are probably driven in cars by others.”

From there I found an associated NPR story specifically focused on the practice of Chinese foot binding –  here is an excerpt, and you can listen to the audio of the full story below:

“Wang Lifen was just 7 years old when her mother started binding her feet: breaking her toes and binding them underneath the sole of the foot with bandages. After her mother died, Wang carried on, breaking the arch of her own foot to force her toes and heel ever closer. Now 79, Wang no longer remembers the pain.”

“Because I bound my own feet, I could manipulate them more gently until the bones were broken. Young bones are soft, and break more easily,” she says.

Although foot binding clearly takes things to an extreme – modifying the foot to fit a tiny shoe – our practice of cramming our feet into shoes with narrow, tapered toeboxes clearly has the potential to cause deformity as well. Take a look at this X-Ray from Edward Munson’s 1912 book “The Soldier’s Foot and the Military Shoe“: 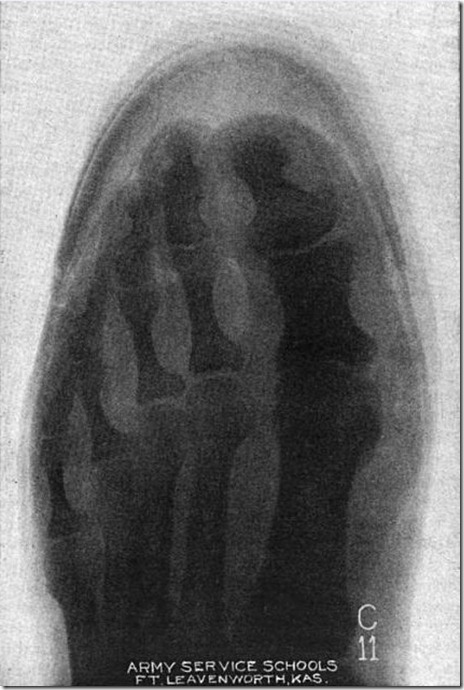 Makes you wonder how many of us who have spend our lives shod have truly natural foot anatomy and function – do your big and little toes angle inward toward their neighbors? Something to think about…