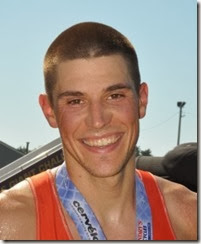 Last week I posted some video of my friend Sam Winebaum’s running form after a filming session at the clinic. Today I wanted to share some video of another athlete who visited last week: Colin Cook. Colin owns Peak Triathlon Coaching in Bedford, New Hampshire, and is an accomplished triathlete. As evidence of his ability, he won the 30-34 age group at the 2013 Ironman North American Championship at Mont-Tremblant, and recently finished the Ironman World Championship at Kona in 9:37:45.

Colin’s gait footage is interesting because he brought three radically different shoes to the clinic on filming day – a pair of Hokas, a pair of more traditional K-Swiss trainers, and a pair of ultraminimal Vivobarefoot Evos. Colin likes to mix up footwear since he feels it varies the stress applied to the body (an approach I practice myself). He did the run at Kona in the Hokas and loves them, but he still also runs a bit in the more minimal Vivos. Colin doesn’t have a significant lower extremity injury history, so we weren’t trying to fix anything. He’d simply never had his gait filmed before.

Let’s take a look at Colin’s Videos. The first shows his form in side view in the three shoes (Hoka, K-Swiss, Vivobarefoot, in that order):

What’s cool about this video is how remarkably similar his form is in shoes so drastically different as the Hokas and Vivobarefoot Evos. One is maximally cushioned, the other minimally, Colin’s contact pattern is almost identical across the board: 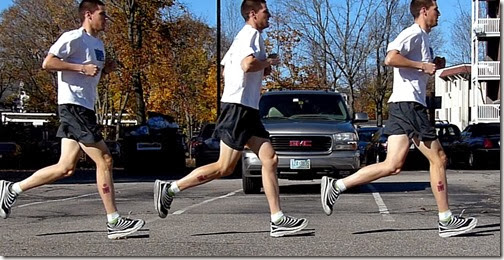 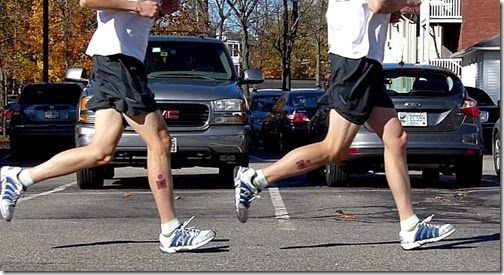 My suspicion is that some people are more sensitive to changes in footwear than others, and Colin has a pretty consistent gait pattern. He also has a decent amount of knee bend at contact and a fairly vertical shin (not much overstride), so he may be running with a stride that doesn’t exhibit a great deal of impact (if he were a significant overstrider in the Hokas I‘d guess his form would look more different in the Evos). He also tends to scuff with his heel at contact rather than coming straight down, and this may allow him to run in the Evos with a mild heel strike. His posture is nice and upright with a slight forward lean. Very nice overall in the side view.

Just for fun, here’s a closeup video of a Hoka footstrike:

The next video is a sequence of the same shoes from behind, focusing in on the feet:

Once again, not a huge amount of difference between the shoes. If anything, the Hokas maybe look a bit more stable than the other two (possibly a consequence of the bucket sole design and wide sole base).

Finally, here are wider shots from the front and back allowing full body visualization:

One of the challenges with gait analysis is that it’s easy to pick out things that look different, but you also have to recognize that everyone moves a little bit differently. Additionally, you need to consider whether the runner is currently injured or not, since sometimes gait patterns you observe are compensations for injury and not necessarily a contributor to an injury. In Colin’s case we have someone who is not injured, and who does not have a significant lower extremity injury history. He’s also performing at a very high level. As such, I’d be very hesitant to suggest any changes to his form, and I try to resist the temptation to overanalyze.

For the most part, I’d say Colin’s form looks great. If there is one thing that gives me a slight bit of concern it’s the fact that he has a lot of thigh adduction during stance. Translated from anatomy-speak into English, this simply means that his thigh angles inward and he has very little space between his knees during swing through. That being said, his shoulders stay pretty level in front and rear views, and I don’t detect a lot of hip drop (should have had him tuck in his shirt). This is a situation where I would leave things alone as I’ve seen cases a lot worse and he doesn’t have a history of injury. However, if problems ever developed at the knee or medial shin this is one thing to possibly have a deeper look at.

It’s always interesting to see how different people move, and Colin is an example of someone who I’d say has very nice form. If you have anything to add, feel free to fire away in the comments!