Home / Blog Posts / Dealing With Deer Flies on the Run: A Bit of Yankee Ingenuity

Dealing With Deer Flies on the Run: A Bit of Yankee Ingenuity 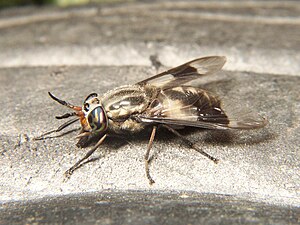 I’m fairly well convinced at this point that runners will do just about anything to get in their miles. With this in mind, I wanted feature the ingenuity (and perhaps slight insanity, but who am I to talk after running 15 miles last weekend in toe shoes?) of a local New Hampshire running friend.

One of the challenges we face while trail running up here in the summer are deer flies. They’re a major annoyance whenever you enter the woods, and advice on dealing with them ranges from sticking a fern frond in your hat so that it extends vertically from your head (apparently they aim for the highest spot, and you get to look like a crazy person while you run), or the more common advice to simply “run faster.”

Well, my friend Jim just posted a picture on Facebook showing a little contraption that he made to deal with the flies so that he could continue to get in his runs on his favorite trails. He coated a plastic cup with some sticky stuff called Tanglefoot

, pinned it to his running hat, and took off through the woods. Here’s what he had to say: “One “trolling deer fly trap” + one slow jog on the local trails = 50+ deer flies, DEAD!!! Silly, fun, and effective. I shall reclaim my beloved trails now, thankyouverymuch.” The photographic evidence is below – I’d love to hear what his wife had to say about this! 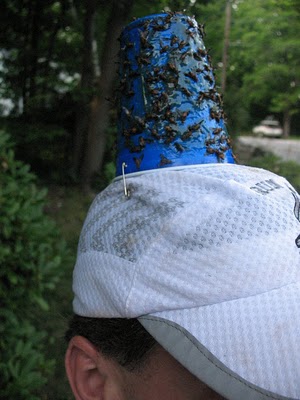 You just finished reading Dealing With Deer Flies on the Run: A Bit of Yankee Ingenuity! Consider leaving a comment!