Yes, the traction is better! End of review. Ok, all kidding aside, I’ve been looking forward to testing the new version of the Brooks Pure Grit since I saw pictures of the new tread pattern.  What was not immediately apparent when I first saw those pictures was that a few other changes were made that are improvements as well. I received a pair PureGrit 2’s from Brooks (disclaimer, these shoes were provided as a media sample free of charge) three weeks ago, and have since run in them 5 times (72 miles) including 2 long trail runs of 20 and 22 miles. 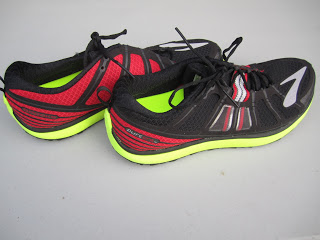 At first glance the shoe looks very similar to the original with a tread pattern change.  Upon closer scrutiny you will notice that the upper construction has changed drastically. The tongue is now a “burrito” style, meaning that the material from one side of the shoe actually wraps around your foot and forms the tongue. 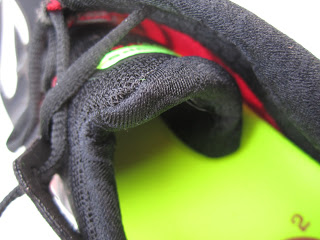 I was not excited about this (before trying it on) because I’ve never liked this design.  I always find that it creates a pressure point on the side where it ends. However, I can say that it works very well on this shoe. The tongue stays in place, does not create any pressure points, and seems to keep the dirt out. My size 10.5 weighs 10.5oz. 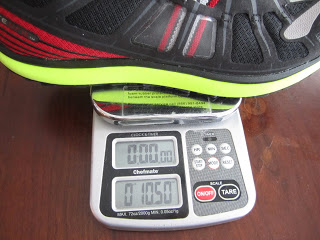 The upper now has an asymmetrical lace opening which creates a very comfortable fit.  The laces included with the shoe are light, thin, and perfectly sized. The Nav Band is now only located on one side of the shoe and seems much more integrated than the old design. Frankly, the old design just seemed to get in the way of lacing the shoe and didn’t seem to provide any benefit.  This new version actually seems to increase snugness around the foot. 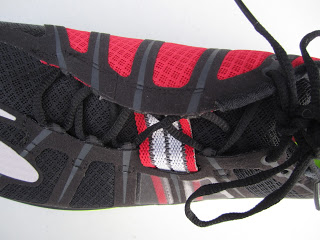 Even with all of the new changes, previous wearers will feel immediately at home slipping their feet into this version.  The level of cushioning and toe box room feel identical. The useless (in my opinion) toe and heel splits are still there. 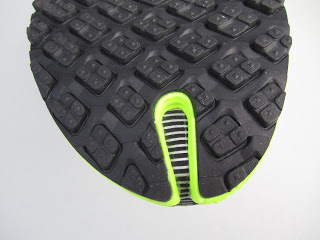 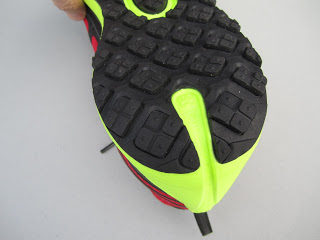 Sizing is also unchanged (i.e., if you wear a 10 in the old version, order a 10 in this version). I felt that the level of arch support was less, but then slipped on my old ones and they feel identical – perhaps the fact that my old ones have 600 miles on them might have something to do with it.  Either way, I seem to recall the arch support being more invasive when I first reviewed version 1 of the Grit. If real, this is a welcome change, but it might just be in my head. 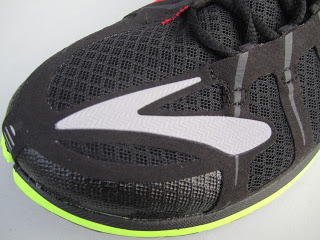 The old version was one of the best draining shoes I’ve ever used. It looks like the material is a bit different on the new version. I have only been running on snowy, icy trails so I haven’t had a proper chance to really swamp them. However, from the little bit of water I have run through they’ve drained well. Hopefully they will be as good as the last version. 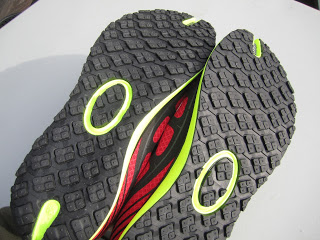 Now, lets talk about traction. The old design worked fine if you were simply going up or down. The second you had to do any lateral movement they were terrible. Not bad, terrible! If you look at the old tread pattern it’s not hard to see why.  There are no sharp edges in that direction. The new design incorporates many more sharp edges and more points of contact. Like I said, I have only run on snowy, icy snowmobile trails but the traction seems much improved. My biggest concern is that the sole material still appears to be the same type of rubber. I have found this material to be terrible on every shoe that Brooks has used it on, all the way back to the Cascadia 4’s. The lack of traction is most noticeable on hard, slick surfaces like wet rocks, and fallen logs. I have not had a chance to test them in those conditions given that it has been snowy and consistently below freezing up here in NH (anybody who has used the Grit 2’s on wet surfaces, please leave a comment to let us know if wet surface traction has improved). 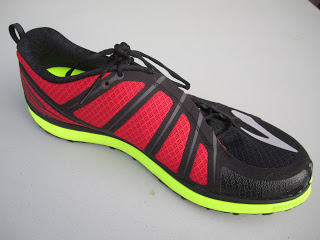 The Biomogo midsole is an absolute pleasure to run on. With a 4mm heel/forefoot drop you can run with nice mid-foot form without any interference. When you get tired (like after 70 miles or so…) and your form deteriorates, heel striking is no big deal because the level of cushioning is so nice. The Grit is equally at home running longer stretches of pavement as running gnarly trails. There are not many shoes on the market that are good at both.

I ended my original review by saying “If I could only have one pair of shoes (God forbid!) these would probably be the ones.” After several runs in the new version I found myself thinking the same thing. This is a great do-everything shoe!